Hi all! Sorry (again!) that I haven't updated my blog for a couple of months. I took November off in order to focus on NaNoWriMo (National Novel Writing Month) which was a bit of a struggle in places but I managed to hit 50 000 words on day 29! Since then I've been working most of the time. I've got some posts I'd like to write (or finish writing) between Christmas and New Year, including my review of the new Star Wars film, a review about Booker nominee A Little Life which I liked most of the way through, but which left a bad lingering impression (which is why I haven't finished the review) and a post about updated adaptations of classic literature, such as BBC's Sherlock, all the rom-coms based on Pride and Prejudice, and the two webseries inspired by Anne of Green Gables. But for now I'm going to review my reading year with the help of Jamie The Perpetual Page Turner's annual end-of-year Survey. (Thanks Jamie!) 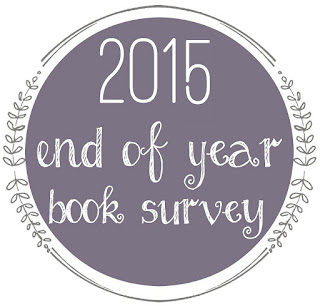 Number Of Books You Read: 139
Number of Re-Reads: 19
Genre You Read The Most From: General/literary fiction (40 books.)

1. Best Book You Read In 2015?
The Shepherd's Crown by Terry Pratchett. If the Discworld books must end, as all things must, this was as close to a perfect rounding-off of the series as you could hope for. Yes, I cried.

2. Book You Were Excited About & Thought You Were Going To Love More But Didn’t?
Needful Things by Stephen King. I really love some of King's books, (The Shining, 11/22/63) but others leave me unmoved (Cell.) Needful Things had an excellent premise: the new shop in town with the sinister proprietor, who will sell you your heart's desire - at a price. But by the end, the body count was so high that I stopped really caring. It's a shame.

3. Most surprising (in a good way or bad way) book you read?  The Thirteenth Tale by Diane Setterfeld, which was surprising in a good way: a book about books, mysteries, a crumbling old house and a great plot twist. A really intelligent and gripping book.

4. Book You “Pushed” The Most People To Read (And They Did)? I handed Bex a copy of How The Marquis Got His Coat Back in Waterstone's, but I don't know if she's read it yet. And I bought my friend Paul Ready Player One when I found it in a book sale, and lent his brother John my spare copy of Neverwhere, but again, I don't know whether they've had time to read then yet (this was only a couple of weeks ago.)

5. Best series you started in 2015? Best Sequel of 2015? Best Series Ender of 2015? I don't read many series books, but I did begin Robin Stevens' wonderful Wells and Wong mysteries. The best sequel was "How The Marquis Got His Coat Back" by Neil Gaiman, a short story/novella really, long-awaited sequel to Neverwhere which is my absolute favourite book of all time (perhaps second to Anne of Green Gables.) As for the best series ender: see my answer to #1.

6. Favorite new author you discovered in 2015? Ali Smith. Her name had been on my radar for a very long time, but I'd always felt a little intimidated by her experimental prose. But The Accidental was very readable and thought-provoking, and I do not intend to leave it so long again before reading more of her work.

7. Best book from a genre you don’t typically read/was out of your comfort zone?
The Elements of Eloquence by Mark Forsyth (language and linguistics.) It examines good writing at great detail, exploring all the techniques Shakespeare, for example, used, and shows exactly why his plays have lasted for centuries.

8. Most action-packed/thrilling/unputdownable book of the year?
Possibly Mr Mercedes by Stephen King - not one of the horror novels which he's best known for, but a detective story that keeps you guessing.

9. Book You Read In 2015 That You Are Most Likely To Re-Read Next Year?
Colorless Tsukuru Tazaki and His Years of Pilgrimage by Haruki Murakami.

10. Favorite cover of a book you read in 2015?
The Gracekeepers by Kirsty Logan. Reminds me a bit of the cover for The Night Circus which is another favourite. 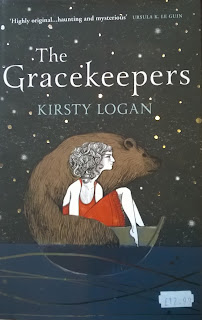 11. Most memorable character of 2015? Harriet Manners from the Geek Girl series, Daisy Wells and Hazel Wong from the Wells and Wong mysteries, and poor Jude from A Little Life.

12. Most beautifully written book read in 2015? The Accidental by Ali Smith. Pure poetry.

13. Most Thought-Provoking/ Life-Changing Book of 2015?
The Year I Met You by Cecelia Ahern. It encourages you to have compassion even for some of the more unlikeable, unsympathetic people you come across in life. Or Elizabeth is Missing, whose protagonist's mind is slowly being worn away by dementia; she is so clear on some matters and yet cannot keep new things in her head all the time.

14. Book you can’t believe you waited UNTIL 2015 to finally read?
The Golden Notebook by Doris Lessing. I didn't love it, but I'd had my eye on it for years.

15. Favorite Passage/Quote From A Book You Read In 2015?
"It is well known that reading quickens the growth of a heart like nothing else." Catherynne M. Valante - The Girl Who Circumnavigated Fairyland In A Ship of Her Own Making.

16.Shortest & Longest Book You Read In 2015? Longest: probably Cross Stitch (better known as Outlander) while the shortest would have been the Happiness Is... book, which although it was quite thick, had only a couple of words on each page. That, or some of the Penguin Little Black Classics, which were about 50 pages each.

17. Book That Shocked You The Most
(Because of a plot twist, character death, left you hanging with your mouth wide open, etc.)
The ending of Dexter's Final Cut. I know there's another book to follow it in the series, but I don't know whether I want to read it. Dexter's Final Cut had an open ending, but one that says "this is where it all changes."

18. OTP OF THE YEAR (you will go down with this ship!)
(OTP = one true pairing if you aren’t familiar)
*shrug* Nothing springs to mind. I did reread Anne of the Island though, which has a more romantic focus, and Anne and Gilbert are a lovely couple. But the rest of the romances, I can just take or leave.

19. Favorite Non-Romantic Relationship Of The Year
Maybe Jude's friendships in A Little Life. The ending of that book has soured my memory of it, but I did find some of the relationships in it really heartwarming, especially between him and his adopted father, and another friendship that turns into love later on (but I am counting it here rather than "OTP".)

20. Favorite Book You Read in 2015 From An Author You’ve Read Previously
Reaper Man, Wintersmith and The Shepherd's Crown by Terry Pratchett.

21. Best Book You Read In 2015That You Read Based SOLELY On A Recommendation From Somebody Else/Peer Pressure:
HHhH by Laurent Binet, which Hanna put into my hands when we found it in a charity shop in Chesterfield.

22. Newest fictional crush from a book you read in 2015? None really. Maybe Jamie from Outlander.

23. Best 2015 debut you read? The Gracekeepers by Kirsty Logan

25. Book That Put A Smile On Your Face/Was The Most FUN To Read? The Wells and Wong Mysteries (Arsenic for Tea was my favourite) or Nunslinger. A nun on the run in the Old West. What's not to love?

28. Book That Crushed Your Soul?
A Little Life by Hanya Yanigihara. I've had a half-finished review in my drafts folder for about two months which - when I get to finish and post it - will explain in great detail why. But I can't quite bring myself to think about that book enough to finish writing about it.

30. Book That Made You The Most Mad (doesn’t necessarily mean you didn’t like it)?
A Little Life again.

1. New favorite book blog you discovered in
2015?
I - I don't think I've actually followed any new blogs this year, unless Erica at The Bookshop Around the Corner was a 2015 discovery. I thought I'd been following her longer though. Hers is a bookshop blog, rather than a book review site, and I've found lots of new shops around the country thanks to her recommendations.

2. Favorite review that you wrote in 2015?
The Shepherd's Crown by Terry Pratchett.

3. Best discussion/non-review post you had on your blog?
The Atticus Problem, a discussion on different ways to understand the differences between To Kill a Mockingbird, and Go Set A Watchman, which was published this year, more than 50 year after its prequel.

4. Best event that you participated in (author signings, festivals, virtual events, memes, etc.)?
Meeting up with various friends that I've made through blogging: Laura and Bex (twice together, plus Bex once) and Ellie and Hanna in Chesterfield.

5. Best moment of bookish/blogging life in 2015? Although March was a very sad time in the geek world, with the death of Sir Terry Pratchett, it was heartening to see so many people come together to celebrate his life and work, and share why he was so well loved by so many.

6. Most challenging thing about blogging or your reading life this year?
Getting back into blogging after taking a month off for NaNoWriMo (which turned into two months and ended with this post here. I've got three or four posts I'd like to write before the new year, and hopefully 2016 with bring plenty more wonderful books and blogging events to get me back into the swing of things.

7. Most Popular Post This Year On Your Blog (whether it be by comments or views)?
My "In Memoriam" post for Terry Pratchett got a "+10" on Blogger, which is not a thing I knew even existed. Other than that, I only get a few comments on each post, and that if I'm lucky.

9. Best bookish discover (book related sites, book stores, etc.)? So many bookshops! Some that stand out are the Little Apple in York, (small, bright and friendly) Babushka Books in Shanklin (rather Black Books-esque in a way, but with typewriters for the customers to share their creative powers, and a little poetry nook) and Persephone in Bloomsbury.

10.  Did you complete any reading challenges or goals that you had set for yourself at the beginning of this year?
I usually aim to read 100-120 books a year, and this year I went up to 139 (and still a few days to go.) My main challenge was to buy two new books for every three I read, in order to work through my to-read shelf. I let that slide in October and November, but still have 28 books (including three loans) on my shelf compared to 38 at the beginning of the year. (I know that's pathetic compared to a lot of my blogger friends who have entire libraries of unread books. But I want to buy only books I'm actually going to read, and older titles do tend to get pushed aside in favour of the shiny new ones.

I'm not going to answer the questions about 2016 releases, for the reason that I don't really know of many books that are coming out next year, and I don't request proof copies from the publishers for review. So my main hope for 2016 is that I will be pleasantly surprised many times over by books and authors I currently don't even know to anticipate.

Merry Christmas to you all, and I hope to be back to blogging on a more regular basis in the new year.