Looking back over the last few months of blogging, I was horrified at how few book reviews I've posted. I've read plenty, but I haven't necessarily been reading analytically, with enough to say to write a full review. So I thought I'd try out a new weekly feature, where I can talk informally about my week in reading (also TV, films, book shopping and other news.)

This week has felt like a looooong one. Work has not been terrible, but I'm starting to feel a little bit run down, and finding it more exhausting than sometimes having to be friendly and welcoming all the time. Little things that really ought not to bother me for more than a moment are chipping away at my peace of mind, and I am feeling very much in need of a holiday. Perhaps that is why I seem to have acquired 10 books in the past 8 days, by various means... 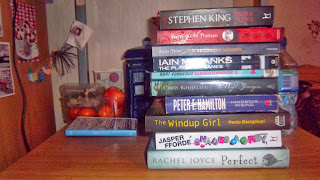 Last week, I spent an evening at the home of some new friends, with good food, good company and a hysterical game of Cards Against Humanity. It is good to meet new people with similar geeky interests, especially in a small community like the Isle of Wight, where most people seem to be remarkably ordinary. Jamie and his wife Chrissie have wonderfully chaotic and geeky bookshelves - I know I've met a kindred spirit when the first book I notice on someone's shelves is a copy of Brewer's Dictionary of Phrase and Fable. Jamie lent me a book called "Mindstar Rising," which he described as a "detective story set in the future." I look forward to reading this one. Also, some time back, my friend and I battled it out for a copy of Paolo Bacigalupi's The Windup Girl in the Waterstone's clearance. She won, but agreed to pass it on to me when she was done. 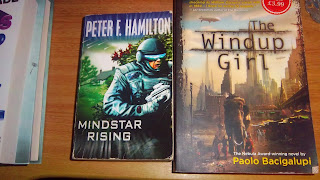 Then, of course, was my Ninja Book Swap parcel from Ellie Warren, containing Perfect and Shades of Grey (Any number below 49 or above 51.) I've made a start on reading Perfect, a story which follows an imaginative boy worrying about an additional two seconds added into the day, and the difference which two seconds can make. The chapters alternate between the boy, Byron, in the 1970s, and Jim in the present day, battling with crippling obsessive-compulsive disorder, and though it is simply written, it gives a powerful insight into a child's mind. I'm only a few chapters in so far, but as well as the main topic of perfection (if there can be such a thing,) I've noticed secondary themes about class and prejudice, and how money cannot buy a happy family. 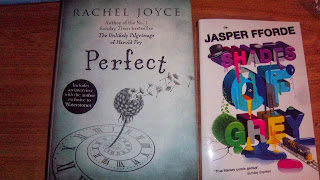 Thursdays are late-night opening at my local library, which was a good thing as I kept on forgetting (or being too lazy) to return my library books on my lunch break, but after work I popped in to take them back... and ended up picking up two more. I've been meaning to read Slaughterhouse 5 for a long time, (thanks to Hanna I am prepared for the sneaky aliens) so was pleased to find it in stock for once! I also picked The Night Strangers up from the "returns" shelf, which follows a family moving into a new house, to find a door in the basement locked with 39 locks... the same number as those who died in a plane crush, piloted by the father of the house. It looks rather creepy! 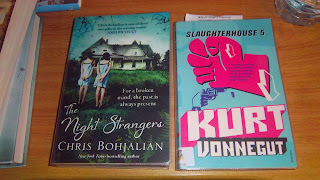 On Friday, I was in town with my best friend Judi, and we just happened to notice the gluten-free cake-and-quiche stall in the Farmers' market, and it would have been rude for her not to support a company that provides for her dietary needs. And once we'd gone through the market, we ended up going past the Oxfam bookshop and picking up two or three books apiece. As you do. I read the first of Iain M. Banks' Culture novels in the summer, which, if I'm honest, I was not enamoured of. I didn't want to give up on him, however. I later discovered that Phlebas is considered atypical of the series, and that The Player of Games was a better introduction to Banks' universe. I also remembered my friend Clare recommending me The Beginner's Goodbye, and once I'd decided to buy a book, what difference would another one make? 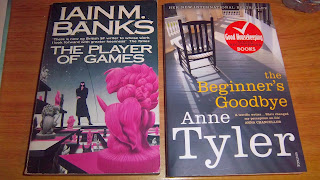 ...Or another three, as it happened. I was feeling a little glum this morning, and as I passed The Works, it started to rain. Obviously, that was nature's way of telling me to go and have a look at the 3 for £5 section. As well as a present for a friend, I discovered Pretty Girl Thirteen, a book about, as I understand it, a teenage girl with a multiple-personality disorder who turns up at home after being missing for three years. I've also been feeling an itch in my brain to read another Stephen King, so From a Buick 8 completed the three.

I've acquired 10 books this week, but how many have I actually read?

I had two books left over from my last library splurge: Heart-Shaped Bruise by Tanya Byrne, and Dolly by Susan Hill. Heart-Shaped Bruise is presented as a notebook found in a former young offenders' home, a letter-slash-diary-slash-confession of a teenage girl awaiting trial for an undisclosed terrible crime.

Dolly is a ghost story from the writer of The Woman in Black, and is very similar in feel. Both are set in big, misty old houses in the middle of nowhere. Its setting lends a wonderfully creepy atmosphere to the story, which is a classic ghost story rather than a fully-developed novel; the sort of story that would not be out of place being told by torchlight at a Halloween sleepover. A quick read; I think I got through it in about two hours.

I made a start on Let The Right One In by John Avijde Lindqvist, a Swedish vampire story that has been sitting on my pile for well over year. Whether it was because I was reading it on my lunch break and feeling distracted, or because this book is not for me, I haven't got very far in it and am unsure whether I should continue. For now, I have put it to one side, and if I don't pick it up within, say, a month, I may bid it farewell. (It was a free World Book Day copy, so I could not in all conscience give it to a second-hand bookshop to sell, but a couple of coffee shops in town have book-swaps, so perhaps it may end up there.)

As it is autumn, which I find quite stressful at work, I decided to reread the Harry Potter books as a bit of escape at bedtime, and this week I got up to The Chamber of Secrets. I've read that series so many times, and yet I still notice odd little moments that I've never picked up on before, such as Fred Weasley dropping a stack of books on his twin brother's head (on the last page.) And, as already mentioned, I started reading Perfect yesterday.
Posted by Katie Edwards at 16:09