From a young age I was interested in boarding school stories, having been introduced to them through Malory Towers and The Chalet School. One day my mother brought home a book called First Term at Trebizon for me from the library, which soon became another must-have. It's not particularly ground-breaking in the school story genre. The main premise is the same as every other beginning of a school story series, and very similar to the many I started writing myself and never got beyond the first page: the main character, Rebecca, starts at boarding school a year after her contemporaries, strives to fit in, makes bad friends, good friends, bad enemies, proves herself on the hockey pitch, fights injustice and wins the day! 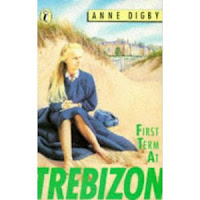 But despite the rather formulaic plot-summary, Trebizon school always felt more real to me than Malory Towers and the Chalet School. It was set nearer to the modern day, written in the 1970s or 80s, as opposed to the 1920s-1950s golden era of girls' school stories. Trebizon is probably the last classic girls' boarding school series before the genre died out.
It was the detail that I loved, and still do. I was a stickler for knowing all the intricacies of the school, and Digby satisfied that, with details of school uniform, enough descriptions of the living quarters that you could probably map out the boarding houses, write a timetable and class lists. Rebecca is part of a realistic friendship group, with her two closest friends, Sue and Tish, Mara, Margot and Elf (Sally.) Secondary characters are also fleshed out and minor characters recur and develop throughout the series.

d the first three books the best, when Rebecca is 12/13, where the books were what I considered "pure school story," concerned with school affairs, lesson worries and friendship woes. In these books Rebecca's aim is to be a writer, and the main plot of First Term at Trebizon revolves around this. As I wanted to be a writer, this was right up my street. I always felt quite a pang as the series went along where Rebecca's writing fell by the wayside to be replaced by her growing skills at tennis. Now, the sports plot seems to be mandatory for girls' school stories, and is certainly shorthand for showing the good characters from the bad. In First Term at Trebizon, we know that Tish is the sort of friend Rebecca should hang around with, because she's on the hockey team, while Debbie is clearly a Bad Egg because she hates sport. So it is only fitting that Rebecca, despite never having played tennis before the age of 13, manages to make it into a county under 14's tennis team the following term.
From this point on, Rebecca's tennis takes over, usually being one of the major plots in each book. For me - who despite my efforts to get on the team and be a Good Sport, was hopeless at all PE and could never quite convince myself I really enjoyed it - this sent the series downhill until one of the Fifth Year books when Rebecca breaks her arm and has to sit tennis out for a term. By 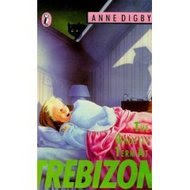 this point in the series even other characters have shown her that she is taking it too seriously, to the detriment of her school work, and by the end of the series she balances her priorities and the stories get better again. However, by that point, this being a more modern series than the other school stories, boys have arrived on the scene in the form of Robbie, Tish's elder brother, and a boy from the local high school.
Fortunately, there are enough school-stories to keep the series enjoyable. There is a mystery to be solved by Rebecca, Tish and the "Action Committee" each term, my favourite being the titular mystery of The Ghostly Term at Trebizon.
Posted by Katie Edwards at 21:05