Normally this blog post would start with a comment along the lines of "Can you believe the year's over already?" But 2016 has been a year unlike any other. I'm not superstitious; I'm well aware that the start and end of a calendar year is arbitrary, that the world does not switch off and on again when Big Ben strikes twelve. But the year has come to feel cursed, a sentient and malignant being that is out to destroy all that is good and bright. It began with the death of David Bowie, of course, followed mere days later by Alan Rickman and joined by radio and TV personality Sir Terry Wogan before the month was out. Harper Lee, Prince, Muhammed Ali, Victoria Wood, Anton Yelchin, Leonard Cohen were all victims of this terrible year (and I am quite sure that I've missed more.) In the last week alone, we lost George Michael, Liz Smith (from The Royle Family), Richard Adams (author of Watership Down) and - when I thought no more celebrity deaths could upset me - Princess Leia herself, Carrie Fisher, and one day later, her mother, Hollywood actress Debbie Reynolds.

It was the year when the British public who wanted to name an exploration ship "Boaty McBoatface" were entrusted with the country's future in the EU, armed with only the promises of politicians and the propaganda of the press. It was the year when terrifying clowns were on the loose, a fad that stopped as soon as their leader was elected to the White House. (I hold each and every person who voted for that man personally responsible for the consequences of having such a reckless, ignorant, arrogant and hateful president, a man with as few redeeming features as humanly possible. There can be no plea of ignorance, everything he said and did was in the public eye.) Months may pass quickly, but the year has been very long indeed.

And yet, on a personal note, it's not been bad. I kept a "good days" journal, filled an entire notebook and started another, to remember my experiences throughout 2016. I've been on days out and trips away, book signings, bookshop crawls, the Harry Potter studios and the Isle of Wight music festival; I've finished a novel - not just a first draft, but have got it to a point where I can start sending it to publishers - and entered a writing competition. I've spent lots of time with old and new friends, and I think that over all my mental health has been relatively stable. I started the year by taking part in Ali Edwards' One Little Word, a scrapbooking and journalling project that, although I let it slide in the second half of the year, has had a lasting impact on my life, and challenged my outlook in unexpected ways. Although I won't be doing One Little Word next year, I've given myself a motto for 2017:

Curiously, I've been seeing that motto circulated a lot in the last few days as part of a quotation from Carrie Fisher.


"Stay afraid, but do it anyway. What's important is the action. You don't have to wait to be confident. Just do it and eventually the confidence will follow."

My Books of the Year:

My Soundtrack of the Year:

Hamilton - by Lin-Manuel Miranda and the original Broadway Cast.
Best of Bowie - David Bowie
A Night at the Opera and Innuendo - Queen
Selected hits from The Who
Selected songs from The Lounge Kittens.

Films of the Year

Quote of the Year:

Hello all! We're well and truly into the run-up to Christmas now; who's ready? I've bought all but maybe two of my presents, but have only written three cards so far. I spent this afternoon wrapping parcels while listening to the Elvis CD with the Royal Philharmonic Orchestra, which although it is only a year old has already got Christmassy associations for me. It's getting busier at work, and yesterday was quite stressful, but overall I've come to realise that I don't mind retail Christmas after all. It's late September/early October that is the worst part, when we start getting massive deliveries (and this year was the worst because our lift broke down around then. And I work upstairs. Carrying heavy boxes upstairs one at a time was not fun.) I wouldn't even mind working through everyone else's Christmas holidays if I could have plenty of time off at the same time but someone's stolen my time machine and therefore expect me to be privately grumbly underneath my jolly exterior on Christmas Eve and Boxing Day.

I keep trying to hold myself to a book-buying ban until Christmas, but when I see a bargain at the moment I just have to snap it up. And yet I've fallen into a bit of a reading slump of late; I've been reading The Passage by Justin Cronin along with my best friend and her boyfriend, but it's rather a slog, and none of us seem to be in much of a hurry to get back to the story. The only things I've really read have been Anne Digby's Trebizon books - a series of boarding-school stories from the '80s and '90s - and The Twelve Days of Dash and Lily. Meanwhile, the piles on my to-read shelf are towering reproachfully over me, telling me that despite my attempts to reduce it, I have about 20 more unread books than I did at the start of the year. Oh well. Books don't go off.

At the end of November my cousin Stewart got married, the first of our generation to tie the knot. (There are some other married cousins, but they are much older and don't quite count.) It was a lovely, wedding, with a church ceremony, then onto a hotel the other side of the Dartford crossing, Those of us who came from the Isle of Wight had rooms at the hotel, meaning that we could dance all night. (I don't dance. I can't dance. But that night I made the exception, figuring that my terrible boogying wasn't going to ruin anyone else's evening, and so I just didn't care.) It was so much fun, perhaps my best day of the year. 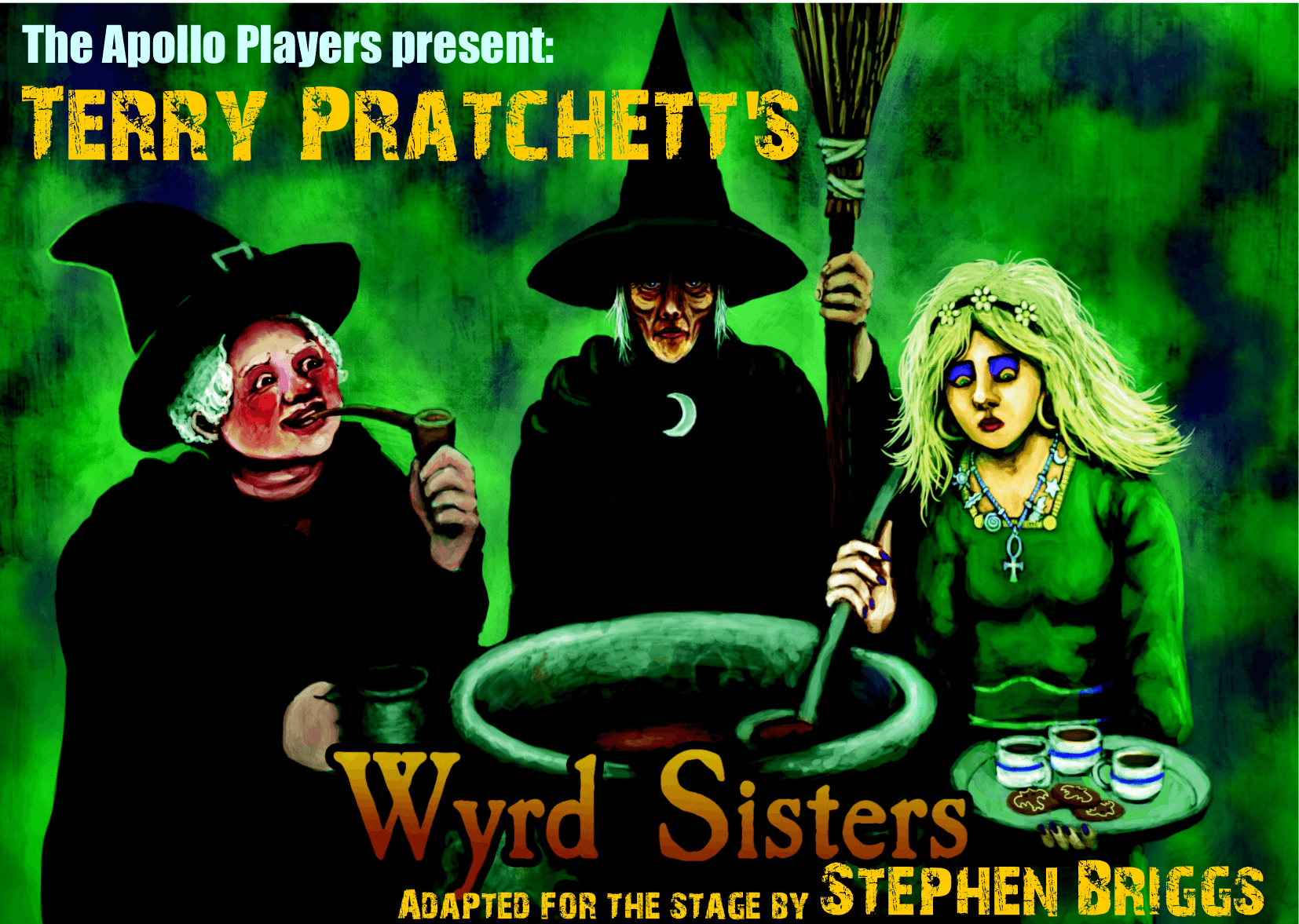 Yesterday I went to see local theatre group the Apollo Players put on a production of Terry Pratchett's Wyrd Sisters. The three witches were spot-on; I was particularly impressed by Magrat (who might have walked off the pages of a Paul Kidby illustration) and Nanny Ogg. Duke Felmet was gloriously hammy, but also rather horrifying as he became more and more unhinged by guilt. Wyrd Sisters' themes and commentary on the theatre made it a particular fitting story to see on the stage, and everyone enjoyed themselves immensely. I hope that the play won over some new Discworld fans. (I also realised that sometimes I have a really dirty laugh.) 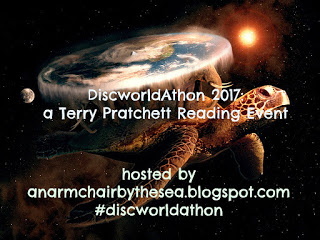 And on that subject, next year, Bex will be hosting a Discworldathon, a year-long reading event for readers and bloggers to lose ourselves in Pratchett's creation. Looking at her introductory post, it looks like it'll be a huge party, with post prompts, challenges and readalongs, and several guest hosts taking charge of different events. I've been a fan of Discworld since I was about fourteen, and have read all but three or four - so in 2017 I will finally finish the series, as well as revisiting old favourites and taking part in some of the challenges. So whether you're an old fan who needs no excuse, or a newcomer wandering what the fuss is all about, I urge you check out the Discworldathon. It doesn't have to be a big commitment; you can participate as much or as little as you like, blogging, reading, joining social media discussions or taking part in other ways.

I've mentioned Mark Does Stuff several times over the years. Mark Oshiro is a blogger who goes into popular books and series completely unspoiled, and writes about his thoughts, predictions and criticisms chapter by chapter or episode by episode. He's currently working his way through the Discworld series and his posts are a fascinating read, supported by a great, intelligent community of readers who can offer all sorts of perspectives and insight. No two people read the same book, they say, and so the discussions present familiar stories in a brand-new light.
Posted by Katie Edwards at 19:31 1 comment: