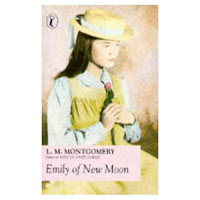 A family friend once told me that her abiding memory of me was as a little, pigtailed girl wearing a straw hat and with her nose buried deep into the childhood classic Anne of Green Gables. The hat no longer fits, and pigtails are a thing of the past, but the Anne books are perhaps, of all the hundreds of books I have read in my lifetime, the novels which have influenced me the most; the redheaded heroine more of a kindred spirit than is perhaps natural for a character that has "no real existance." It would be only natural for me to open my book blog with a review of Anne of Green Gables, and a discussion of just why it is such an important book to me.
But I'm not going to. It's gone ten at night, too late to be able to do Anne Shirley justice, and too early for the magic to work that brings inspiration to life just at the time when I know I should be getting ready for bed. Instead I will write about one of Lucy Maud Montgomery's other heroines: Emily of New Moon. It is inevitable that there will be comparisons to the Green Gables series, but I hope you will forgive that.

I grew up with Anne Shirley since I was about seven, but had not heard of Emily Byrd Starr until a year or so ago. I stumbled across the first book in the series in a charity shop for the not-too-shabby price of 49p, and took it home.

The first thing that struck me about Emily was a peculiar phenomenon that she called "The Flash."
It always seemed to Emily, ever since she could remember, that she was very, very near to a world of wonderful beauty. Between it and herself hung only a thin curtain; she could never draw the curtain aside -- but sometimes, just for a moment, a wind fluttered it, and then it was as if she caught a glimpse of the enchanting realm beyond - only a glimpse - and heard a note of unearthly music [...] She could never recall it - never summon it - never pretend it; but the wonder of it stayed with her for days. 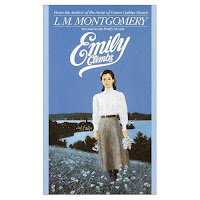 Reading this description made me shiver, because I realised I knew exactly what Montgomery was trying to say, though I couldn't have expressed it quite so myself. I once wrote:

Sometimes a sight, a word, an image, sends me right out of myself and I know I am in another world - a story. Sometimes it is so vivid it gets mixed up in my memory with reality, at other times I can't quite grasp it, like there is something beautiful just out of sight.

Emily's "Flash" is at the heart of the series, making remarkable a straightforward coming-of-age novel. No, not straight-forward. Anything but that.

Eerier than the Anne novels, Emily of New Moon has traces of the supernatural, all the unexplained, throughout the series. Hinted at with her "Flash," each tale has at least one incidence of the "second sight" which Montgomery never tries to explain away, or to explain. Emily 's is also a darker story than Anne's. Towards the end, in particular, I see traces of Montgomery's darker state of mind, of "white nights" and three o'clocks in the morning. I would find all this tied up in two themes: love and writing. There is the pain of misunderstandings that threaten the relationship between Emily and a childhood sweetheart, the pain of smiling through what seems like unbearable sorrow and forgiving a betrayal unknowingly commited. But there is more, and I would say it is all tied up with a character named Dean Priest.

Now, I don't know whether L.M.Montgomery intended Dean to be quite so creepy as I find him, but in the twenty first century... well! He is in his mid thirties when he meets Emily - she is a little girl of twelve. There is nothing wrong as such in his behaviour at first - but his mind! From the first time he meets her, he is waiting for her to grow up - he is waiting until she is old enough for him to love. And what starts off as mildly disturbing just grows and grows. When Emily is an adult, and the age difference between them is only an issue because of the "age difference" rather than her being a child, he slowly becomes a double of Mrs Kent, the possessive mother of Emily's friend Teddy. Mrs Kent will not allow Teddy to love anything lest it make him love her less. She hates anything he likes and will set out to destroy it, whether it be his artwork, his kittens or friendships. What I find to be the darkest part of the Emily series is when Dean echoes that so completely - in his jealousy, he lies to Emily in a way that destroys the writer within her for a time, and threatens to destroy her very essence. 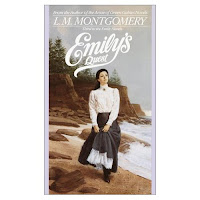 For writing is the essence of Emily. She is a writer to her very core. When asked to give up her writing by a disapproving, old-fashioned aunt, Emily's reply that it's "[n]ot that I won't - it's just that I can't," strikes a chord with me. I couldn't stop being a writer. Even Emily, when she commits no fiction to paper for two years - a sacrifice I never would be able to make, for anyone or anything! - stories and characters grow, bursting to be written. Writers are advised that they should never write about writing, but Montgomery's ignoring of that rule was a successful putting into words of things that otherwise might remain unexpressed. The series is a story about coming of age as a woman, and as a person, but most of all as a writer. Some people write, other people are writers, and the Emily of New Moon series expresses just what it means to be the latter.
When I read the Emily books the first time, I wasn't sure I liked Emily, simply because she wasn't Anne. As a child I found Anne Shirley to be more even than a friend - it felt as though she was a part of me, a dreamer, an optimist, someone who loves people. Emily is certainly more down-to-earth than Anne, and while Anne's imagination is her defining characteristic, Emily is far more single-minded. It's not that writing is the only thing that matters to her - love, friendship and pride are also top priorities. But without her writing - she cannot be truly herself. In that brief period after Dean told that awful lie to her, she is almost a puppet, fooling nobody but herself that she is happy and fulfilled. Anne could live without writing, I think. She'd not stop imagining, or dreaming, but writing seems more of a fancy for her, rather than a desperate need. She could write, or she could not write. Emily could not not write.
Posted by Katie Edwards at 21:55 3 comments: