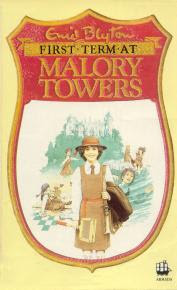 When I was a little girl, a relative bought me some Secret Seven books, which got me hooked into Enid Blyton, to my mum's horror. She insisted that Blyton's books weren't actually very good, and that she overused exclamation marks, and recycled the same stories over and over. Fair point. Can't see much to argue with in that. But anyway, when I was a nine-year-old in primary school looking through the book-box for something to read, I was overjoyed to find First Term at Malory Towers, my introduction to the world of the School Story.
I was a little disorientated at first. The only boarding school book I had read before was What Katy Did At School, and I wasn't sure what to make of it. The book opens with my most hated (now) device of standing the character in front of the mirror to tell the reader exactly what she looks like (and it's nearly always a female character.) Still, it gave me a full description of the school uniform, something my later attempts of school-story writing was never without. I was also rather confused by the fact that the main character was called Darrell, though was definitely supposed to be a girl. (If I was living in C21st USA I probably would be used to that gender-swapping name phenomenon, but I was a 1990s English kid.) Still, once that confusion was cleared up, I enjoyed the book, and even bought my own copy so I could finish reading it. Even now, the characters and the events stick firmly enough in my memory to count as "classic." 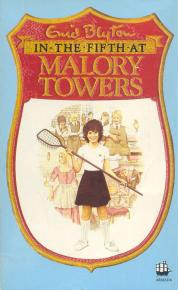 As I previously mentioned, Blyton's writing is not what one would call literary, but the Malory Towers series counts as one of her best. The characters, though still not always very rounded, are more three-dimensional than her usual goodies and baddies. Most interesting of all is Alicia, the popular girl. As soon as Darrell meets her at the train station she wants to be her friend, but Alicia is not a very nice person. In fact, she's a downright bully at times, having no time for timid or stupid people, and her practical jokes sometimes go too far. That's not an unusual phenomenon if you watch high school movies nowadays - there is always the queen bee and her minions, the popular mean girls - but for Blyton, whose "good" characters have never more than a hot temper as a flaw, that is groundbreaking.

The series is also her most grown-up work. The final book in the series shows the characters at eighteen, looking forward to leaving school and going off to university, or discussing careers, rather than being caught in a time warp and not being allowed to grow past fourteen or fifteen. Of course, there's no suggestion of marriage for any of the characters. Malory Towers is an all-girls' school, and even all the staff appear to be unmarried (though that is partly because of the times - married women of that class didn't work - also there'd be nowhere onsite to put a husband and kids, I expect.) The characters mature and change throughout the series - yet not necessarily leaving school thoroughly reformed. Alicia and her best friend Betty, though the brightest girls in the class, are predicted by the head not to do that well at university because independence will go to their heads - they're the sort of people who would go out all night partying, without realising that natural talent without hard work will only get you so far.
There is even the threat of death in Last Term at Malory Towers. Gwendoline Lacey, the series's villain (though, I am in the school of thought that thinks that she never had a chance to redeem h 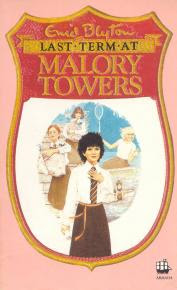 erself - the other girls and even the staff had written her off as a spoilt brat before she'd even got onto the train) spends the final term making herself insufferable, bragging about being sent to an expensive finishing school in Switzerland and how she and her mother had bullied her father into sending her. But at the end of the book, she has to leave school early because her dad is dangerously ill and not expected to survive.
Of course, being Blyton, Mr Lacey does not actually die. His illness is a device to teach a hard lesson to a girl who, though throughout the series appears to change for the better, always reverts back to her own spoilt, catty self. Nothing less than the threat of her father dying without her having the chance to make amends could affect Gwendoline for very long - and when he doesn't die, it gives her the chance to make amends. Though she is doomed to that awful fate (for a Blyton character) - of getting a job. Not a career - a job, probably in the secretarial line. Oh, the horror!
Posted by Katie Edwards at 10:03