Kevin Sullivan's adaptation of the first of L.M.Montgomery's classic novels is, in the words of Mary Poppins, "practically perfect in every way." Filmed on location on Prince Edward Island, the novel comes to life, filling in those scenes I couldn't quite visualise from reading the book, and rarely, if ever, "getting it wrong," where I had preconcieved ideas. Watching the film makes me want to catch the next flight to Canada - preferably P.E.Island - and hunt down my very own Gilbert Blythe. 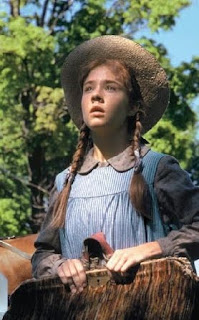 The characters, too, are cast perfectly. Megan Follows is adorable as the precocious red-headed orphan - her eyes alive with wonder and curiosity and spirit, with such a sweet voice (and the pretty nose Anne is so proud of.) Jonathan Crombie as Gilbert Blythe - why, no one else could be Gilbert. In my DVD of the sequel two books, which we will come to at a later date, Gilbert looks like a lesser-known Austen hero - Edmund Bertram, perhaps, or Captain Wentworth - but Crombie stands out from the rest. Mischief, strength of character and decency are written all over his face - and one can see glimpses of the man he will grow up to be, Doctor Blythe, if Sullivan's series would allow it.

I could go on in this way describing every main character. Rachel Lynde - though she could be a little fatter - speaks in just the right voice with, what I, for lack of better knowledge, call a "scoldy Canadian accent," Shy Matthew, though he lacks the beard that does not match his hair, makes up for it letting his eyes, supplemented by a few words, say as much as Anne does with all her chatter. Marilla's outwardly stern demeanor is softened by a twinkle in her eye and the very same "something about her mouth which, if it had been ever so slightly developed, might have been considered indicative of a sense of humour" that Montgomery gave her.

As - despite the attempts of our local newspaper's theatre reviews to prove otherwise - there are only so many ways one can say "this was good, that was good," in one place, I will go onto those few things that bother me slightly about Sullivan's adaptation, that prove that he never was a little girl who was more than half Anne. And yes, this is a bit nit-picky, but one must be fussy if there's nothing greater to find fault with.


The romantic tension between Anne and Gilbert is given a little too much emphasis, which changes the feel of the film from how I approach the book. Yes, it is clear from the very beginning that Anne and Gilbert are made for each other - but Anne really is oblivious to the fact. There is a scene at the "ball" (in the book Anne and Diana attend a concert) when Anne claims that she has the power to make Gilbert do whatever she wants. See, the book Anne, 1. just hated Gilbert at this and refused to acknowledge his existance, 2. had no idea Gilbert liked her, and 3. wasn't the sort of girl who would abuse that power she had over a boy. Similarly, towards the end, Anne realises that Diana is "interested in Gilbert," but said nothing because she thought Anne was in love with him. Again - the girls aren't at that point in their lives. Ruby Gillis is "interested in boys," from an early age and is considered terribly fast and not very nice. 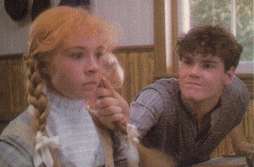 See, for me, Anne of Green Gables isn't a romance. It is a story of girlhood, a pre-romance, if you like. About a child finding her place in the world, getting in and out of scrapes and shaping her character. There are hints of romance to come towards the end of Anne of Avonlea, but that is the future. And though the references in Sullivan's film are subtle, they are not quite subtle enough stand out glaringly to me as a modern insertion.
Other than that, however, my only criticisms are tiny indeed: Sullivan's changing, or more likely missing the significance of, a very very minor character's name. Moody Spurgeon McPherson loses the McPherson and is given Spurgeon as a family name. But in the books, Anne reports that "Moody Spurgeon is going to be a minister. Mrs. Lynde says he couldn't be anything else with a name like that to live up to. " Moody and Spurgeon both being famous preachers, it seems the poor lad was destined for the clergy from birth. And indeed, I cannot think of Moody without Spurgeon nowadays, or Spurgeon without Moody, or either without McPherson.
Posted by Katie Edwards at 22:28