I first encountered Alan Bennett's The History Boys in its playscript format as one of my set texts at university. It was brand new at the time, being performed at the National Theatre, although I was never fortunate enough to see it. It was soon afterwards adapted into a film, starring the original cast. I found it interesting to compare the screen production with the version that played out in my head. Usually I am disappointed with how someone else visualises a story that I’ve imagined vividly for myself, however, The History Boys was a notable exception. An excellent cast, both of the schoolboys and staff, breathe life into the characters and make the story more complex than it was on paper. Of course, The History Boys, as I was always told when studying Shakespeare, was not written to be read and studied, but performed. 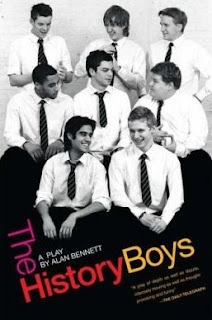 The play follows a group of grammar school students who, after receiving their A-Levels, return to school for a final term for extra lessons to prepare them for Oxbridge entrance exams. Their most influential staff are old-fashioned teacher Hector who values knowledge for the sake of knowledge, whose General Studies lessons are informative but often irrelevant (such as a wonderful scene, conducted entirely in French, when the boys enact a scene in a brothel, only to change rapidly when the headmaster walks in.) Also we are introduced to new teacher Irwin, whose job is to prepare them for the exams and show them how to turn out original, controversial, unexpected answers, a new interpretation on history.

The eight boys are each well-rounded characters, but the chief boys are sad-eyed Posner whose inner turmoil and crush on the cocky star of the class, Dakin. Though a more minor character, special mention has to go to Rudge, the (comparative) thicky of the class who is more interested in sport than academic achievement and who is only trying out for Oxbridge because it is expected of him. Rudge is played wonderfully by Russell Tovey, otherwise known as George the werewolf in Being Human, and who is currently, and deservedly, popping up on pretty much any TV show you care to mention. 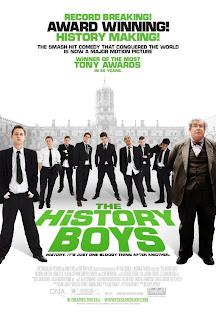 The History Boys is a witty, fun play/film that nonetheless has a rather uncomfortable undercurrent, in particular in the feelings it evokes towards Hector. On the one hand, he is a teacher of the old school (if you’ll excuse the pun) with a passion for learning whose methods are being discounted in favour of league tables and impressing examiners with what they want to hear and never mind the truth. On the other hand, out of school, he crosses a definite line with his pupils in a way that makes it difficult to reconcile condemnation with sympathy, though the boys themselves treat it all as rather a joke. Despite the darker subplots, I found The History Boys to be, overall, a feel-good film about education, aspiration and growing up.
…Until right at the end, where the mood takes a jarring turn. Twice. In the stage play, there are “framing” scenes that seem out of place at the time, but set up the ending. The film does not have any of these scenes, which I was glad about because I didn’t feel when reading the play that they added anything. Yet their absence makes for a more shocking ending. Firstly, there is a shock twist to the story proper, and secondly, there is a sort of epilogue which is at the best bittersweet and at the worst depressing. I didn’t find this made the film any the worse, but if I had not read the play I would not have liked it. Certainly the makes you think and wonder why Bennett chose to end it this way. I haven’t yet come up with an answer to that question.
Posted by Katie Edwards at 16:03