My first ever acting part was as Violet Beauregarde in a primary school production of Charlie and the Chocolate Factory when I was nine years old. Chewing gum was one of the deadly sins of primary school, so I had to fake it, and I remember that when the time came for me to inflate like a blueberry, somebody put a blue cloak around me and I stuck my arms out. When I say a blue cloak, I mean turquoise. Not violet. Not navy. Turquoise.
Roald Dahl is the quintessential example of an author that when you reach adulthood you wonder how his books were ever considered suitable for children, and yet at the time you hardly notice anything at all. Perhaps this is because there are less clear ideas about what is fantasy and what is real life when you're a little kid, and therefore things that sit on the boundaries don't worry you so much. I don't know. 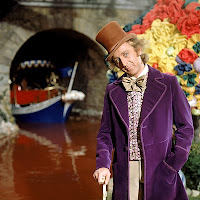 The 1971 adaptation of Charlie, Willy Wonka and the Chocolate Factory starring Gene Wilder was one of the classic children's films when I was growing up, alongside Mary Poppins, Chitty Chitty Bang Bang and Oliver! Apparently Roald Dahl hated this film, but for me it was the film of the book, if not a straight adaptation at least it was the companion piece. Wilder's Wonka was subtly sinister, but in such a way that I only really notice watching the film as an adult. His eccentricity was beneath the surface, and all I tended to see was the polite, calm, unexcitable gentleman he seemed to be, the face he put on. Watching it this afternoon, I found his bored responses to the naughty children's fates rather inhuman, such as his monotone: "Help. Police. Murder." when Augustus Gloop was stuck in the chocolate river. I also found something slightly off-kilter about the chocolate room, which (possibly due to poor special effects when compared to what I'm used to) doesn't feel quite real, or quite imagined. The chocolate river, for example, looks like red-brown water and not melted chocolate at all. Not even a chocolate milkshake.

I say as an adult that I never noticed anything creepy about Willy Wonka when I was its target age group, but watching the film again I realise that isn't quite true. The added subplot character "Slugworth" was creepy enough to designate him immediate "villain" with his Demon Headmaster monotone, and I think it was actually quite late on that I understood that he wasn't a baddie but an actor hired by Wonka to test the children's trustworthiness. And as for the boat ride, why, I simply blocked the worst of that from my mind. Perhaps I remembered some of Wonka's poem "There's no earthly way of knowing..." and the flashing colours, but not Wonka's singing in a cold, thin, quavery voice, turning into a scream, and certainly not those awful, where did that come from?! hallucinations, images or whatever that was they passed. No explanation is ever given, but, boy, that is horrible! 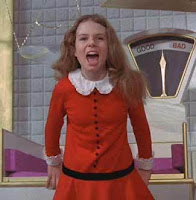 Of the children, there was a certain star quality in Julie Dawn Cole's spoilt brat Veruca Salt, the only child (apart from Charlie) with her own song, "I want it now," sang in a mixture of bratty tantrums and (probably) drama-school trained RP calmness.
As well as the stories of the five children who win the golden tickets, the film shows little snippets from around the world of the less successful searchers to illustrate the international obsession with finding the tickets and winning the grand prize. As well as the forged ticket that does not appear in the book but is used in 2005 by Tim Burton, we witness the turmoil suffered by a woman trying to negotiate with the kidnappers of her husband.

Woman's Lawyer: "It's your husband's life or your case of Wonka bars!"
Woman: "How long will they give me to think it over?"

Among all the Wonkamania, it is as though chocolate itself is devalued by the sheer amount unwrapped and discarded. All anyone cares about is winning this golden ticket, and seeing inside the factory. Even the lifetime supply of chocolate seems like an afterthought. Charlie notices this and says,

"I bet those golden tickets make the chocolate taste terrible."

Even the Bucket family aren't immune. There is a slightly uncomfortable attitude that of all the people in the world (100 billion according to this film!) although there's no chance he'll ever find a ticket in his annual chocolate bar, Charlie deserves this prize, is entitled to this prize because he is poor and good:

"A little boy's got to have something in this world to hope for. What's he got to hope for now?"

Well-meaning, but somewhat melodramatic even in the Buckets' poverty, I feel. Besides, in this version, Charlie is not as good as all that. It could be argued that he's no better than the other four children because of the scene in which he and Grandpa Joe steal fizzy lifting drinks, and are only saved from a gruesome fate by chance. He is redeemed by showing remorse at the end when Wonka finally shows his human emotions of disappointment and anger.

The 2005 film, Charlie and the Chocolate Factory is a film by Tim Burton, so naturally it is more overtly surreal. It came out at a time to make people who savoured Dahl's weirdness celebrate the Tim Burton/Johnny Depp (and Helena Bonham Carter) collaboration, before we started to feel a little weary of their becoming inseparable. The set is full of Burton's trademark twisty designs, garish colours (and a realistic-looking chocolate river!) and an unearthly soundtrack thanks to Danny Elfman (another of Burton's little gang.) Depp's Wonka is in many ways the polar opposite of Wilder's: while Wilder is understated, Depp is immediately bonkers, with a feminine bobbed hairstyle and zombie-grey skin of someone who hasn't seen the sunlight in fifteen years. His childish excitement, childish manner and voice reminiscent of Michael Jackson serve to make his Wonka seem less like an eccentric genius and more as though there is something missing in the connections of his brain. 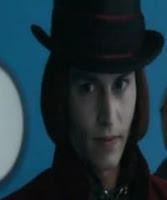 Yes, Depp's Wonka is creepy when he is clearly not all there, and creepier still when he is. When Veruca Salt is throwing a tantrum at her father demanding a squirrel, Wonka listens intently, and his expression turns to realisation and horror when Mr Salt starts to indulge her, firmly taking parenting into his own hands by refusing to sell the creatures. A moment later, she has fallen down the garbage chute and Wonka's face as he lets Mr Salt in afterwards is beyond creepy. There is something evil about it.
Where Willy Wonka gave Charlie some mischievous traits to prevent him being too much of a goodie-goodie, Burton's Charlie retains his goodness, and we get to see that it is a little sickly-sweet. These Buckets aren't too caught up in Wonka-mania:

"Whatever happens, you've still got the candy."

When he wins it, Charlie even considers selling his ticket so that the family can eat something other than cabbage soup. The Buckets, getting so little chocolate between them, really savour every bite. Family is what is important to Charlie and the Buckets, and the rather unnecessary backstory (but containing Christopher Lee!) hammers home that value, as well, perhaps, as a moral about having a healthy relationship between chocolate and toothpaste.
The Charlie music is possibly better than Willy Wonka's, especially regarding the Oompa-Loompa's songs, which come in a variety of musical genres and take their lyrics directly from the book, yet they are less memorable than the simpler classic, "Oompa-Loompa-Doopity-Doo." Perhaps that goes for the film as a whole. I would be reluctant to judge which of the two adaptations is better, or more faithful, because they are just so different. To me, Burton's Charlie is slicker than Willy Wonka, and yet it is not the real version. Charlie is a faithful yet wacky re-imagining of the story, while Willy Wonka is the definitive adaptation.
Posted by Katie Edwards at 23:41