Just As Long as We're Together, Judy Blume

For my twelfth birthday present, my Nanna went into her local bookshop and asked the assistant what she would recommend for me, and was directed towards the Judy Blume section. ("They're all suitable, except one," she was told.) She picked out Just as Long as We're Together, and I was introduced to the world of teenage fiction. My mum read it first though, just in case. It was probably Nanna's suggestion - she didn't want me reading something my parents wouldn't approve of, but it passed the test. I asked her what she thought, to which I remember her saying, "It's very American." I wasn't quite sure what she meant by that, and I'm still not, other than the fact that it's the setting. I think it may have been that American children's books dealt with slightly more grown-up topics than the British books I was reading - but that was probably more to do with the era of writing than anything else, as at twelve I still read the Chalet School books - though I had outgrown Enid Blyton. 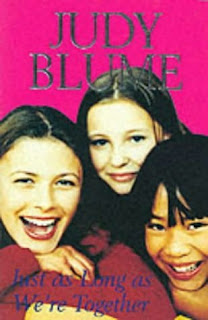 I loved Just as Long as We're Together. The characters, Stephanie, Rachel and Alison were a year older than I was. Their experiences of turning thirteen in suburban America, probably in the late '70s (I'm not certain as my book has lost its cover and copyright page) seemed like a completely different world from the one I inhabited at the time.
If you asked me what it was like to be a child growing up in the 1990s, I don't think I could tell you. I did not live in the world of the time, really, until about 1997 or 1998 - about the time when I read this book. I lived in the world of the books - the 1940s, with the Famous Five, the 1920s with Jo Bettany the second half of the 19th century with Laura Ingalls, Anne Shirley, Katy Carr... but the world of the day did not interest me at all. As previously stated, Judy Blume's books were still a bit dated even when I encountered them - but they were more modern than the world I knew. There was television, shopping malls, denim - and sex, divorce, and adolescence, things that were hitherto unmentioned in my reading. Chalet School old girls got married to their doctors, and some time later they started knitting bootees and vests and warning people they were going to be busy soon.

Stephanie's world became very vivid for me. For a while I was sure there was a prequel - that perhaps Here's to You, Rachel Robinson, which I had already read, came before, rather than after this book. There were enough descriptions about Stephanie and Rachel's lives before the book opens, and the characters seemed well-enough established that I found it hard to believe that this was the first time we had met them. However, when I read Here's to You, Rachel Robinson, I was very disappointed. I wanted to know what happened to Stephanie, whose point of view ...Together took, and didn't care so much for Rachel and her family. I liked them as secondary characters, but didn't get to know them as intimately as the Hirsch family, who barely appeared in the sequel. I had got to know Rachel as Stephanie's too-perfect best friend, and found her slightly annoying seen from Stephanie's point of view, and therefore found her difficult to care for as a protagonist. This probably says more about who I was at the times of reading the two books than being a comment on the writing, or even the characterisation. ...Together was my companion through the storms of adolescence. I met this book just before I started to experience things like boys, being able to go shopping on my own, arguing with my best friend for the first time, and generally being a bratty teenager. When my sister bought ...Rachel Robinson a few years later, I saw her as a bratty teenager, but I no longer was (at least, not quite so bratty!) so I could no longer really relate to her struggles.

By the way, my paperback copy of this book has lost its cover, a cover I was particularly fond of, and I can't find a picture of it anywhere online. It's a Macmillan paperback, illustrated by Richard Jones, a blue back cover, and on the front it has Stephanie in the foreground wearing dungarees, and Rachel and Alison in the background. I think Steph was standing in front of a house, but I couldn't swear to that. On the very slim chance that one of you readers have the same edition, would you be able to send me a picture, please?
Posted by Katie Edwards at 11:06 1 comment: