Sunday Summary: June and July in review; Rereadathon #4 is coming!

It's been a weird couple of months, and the world is seeming like a very strange and unstable place at the moment. I've no intention of making much commentary on British politics as it is at the moment, (and as for the American apocalypse-in-the-making, well!) but things are certainly interesting at the moment. Thinking like a writer, I'm trying to jot as much as possible for future reference, when I'm sure 2016 will be a very identifiable historical setting for fiction. Thinking like a person who has to live here, though, it's been a bit of a struggle to get my head around. Hearing the beeps on radio 2 preceding the news and feeling that dread in the pit of my stomach, wondering, "Oh no, what now?" Perhaps that has a lot to do why the end of June and beginning of July were difficult, with migraines and anxiety feeding each other until they became a monster. (I'm feeling a lot better now overall, but the world is still a scary place.) 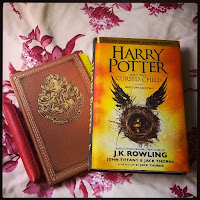 I had a bit of a reading slump for a few weeks, so I went back to some old favourites: Good Omens and The Railway Children, as well as the  latest in the No. 1 Ladies' Detective Agency series and the next book in the Geek Girl series. I gave in and bought the hardback... just a week or two before the paperback came out. So now my set doesn't match. Oops. Today I got stuck into the Harry Potter and the Cursed Child play script, which I'm not going to tell you anything about at the moment, except that I enjoyed it very much. I'd prefer to see it on the stage - I'm sure it must look amazing with all the magic and special effects - but am not an obsessive enough fan to get in the internet queues for tickets at some point in the next few years. 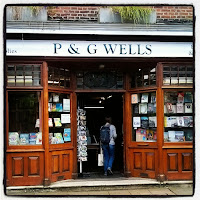 I've actually had a bit of a social life in the last couple of weeks, shock horror! My mum's Canadian cousin Cedric was in the country with his family, and we went out for a meal, where I bonded over film and geekery with his teenage son Jeremy. I met a friend in Winchester, which is a good midway point between Kingston and the Isle of Wight. As usually happens when I meet up with friends, much of the time was spent in bookshops: first the Waterstone's, where Clare persuaded a fellow shopper to buy a particular kind of academic diary, then we went to the second-hand bookshop, which is over three stories. We found all sorts of curiosities in there; I came away with a graphic non-fiction by Raymond Briggs of The Snowman fame, all about his parents' lives, and a guidebook to the Isle of Wight from around 1926, which Clare kindly bought for me as an early birthday present. It was a fascinating read to see how much it's changed, most notably with the removal of all but one of the railway lines that were the main form of transport back then. After a pub lunch and taking refuge from the rain in the doorway of the cathedral (the cathedral itself was not open to the public that day) we went in search of P&G Wells, the town's independent new-books bookshop.

I've been to the cinema twice in the last ten days, to see the new Ghostbusters film. One word: Holtzmann!!! (Well, yes, there are more words but I'll save them for my review post.) 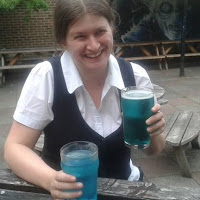 And of course I saw Star Trek Beyond this week, at a showing where I seemed to know half of the people in the cinema, including my old boss and his girlfriend, my other friend with his colleagues, and a rival bookseller. Now that's what cinema should be like - packed out with like-minded nerds. Finally, on Friday, my sister had a half-day and came down to Southampton, so I took the ferry straight after work and we went to our favourite pub The Hobbit for bright blue cocktails and catch-up.

Despite all my gallivanting, I also finished what I am hoping is my penultimate draft of the children's book I began writing last November for NaNoWriMo. (!!! I don't think I've ever got as far as a penultimate draft of anything before!!!) It's at a point where I'm going to give it to other people for feedback - scary stuff! So they can read through it while I take a bit of a break, watch a load of Star Trek DVDs, '90s sitcoms on Youtube, sit in the sun and swim in the sea, and perhaps actually make that jigsaw that's been sitting by my bed for a year! 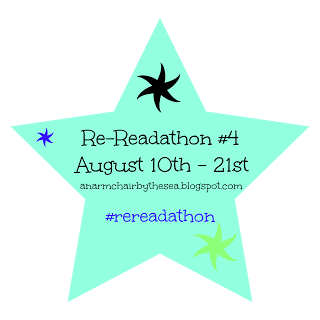 I've got one more week of work, then two weeks' holiday, which coincides nicely with Bex's fourth rereadathon, running from 10th-20th August. I haven't got a definitive list of books I want to reread yet, but some ideas include:

Also in August, I'm going on a couple of little excursions: first to Cardiff, where a twitter friend @dorkomatic is acting in Monstrous Productions' play of Terry Pratchett's Going Postal. From Cardiff, I'm taking the train to Bath, for another bloggers' Bookshop Crawl (again organised by the fabulous Bex.) Hopefully, in both cities I'll get to meet up with old friends too. I love the summer!
Posted by Katie Edwards at 21:10 3 comments: