Hi everyone. Despite my lack of blog posts recently, I've actually been reading a lot, I just haven't had an awful lot to say about any of the books. However, I felt it was about time to share some thoughts on a few of the things that I've been reading.

Since discovering that one of the Island libraries has nearly all of the Sandman graphic novels, I have been making regular trips and marching through the series, before passing them on to my friend. There is a wide variety in the style and format of stories, like an elaborate patchwork quilt: one volume will be a long narrative, and the next made up of short stories. Some star the titular Sandman, Dream, and his Endless siblings: Destiny, Death, Delirium, Desire, Despair and Destruction, whereas in other volumes they only appear occasionally, around the edges of the stories, so to speak.

I'm currently up to vol. 8: Worlds' End, in which travellers from all through time, space and contradictory but co-existing realities find themselves stranded by a storm in an Inn, in which they occupy their time by telling stories of all flavours and styles. But the storm is not an ordinary storm, but a "reality storm" caused by something strange and rare and unexplained. When the tales have all been told, the travellers go to the window and see a strange thing in the sky, a thing that none could explain or understand, but somehow we all, reader and character alike, could sense that things were never going to be the same again. Behind the pages of the stories told in Worlds' End, another story has been taking place, a story of enormous significance, hidden from the eyes of the ordinary - extraordinary - folk who dwell in the Sandman universe(s) and yet to be revealed to the readers, no doubt in volume 9.

By this point, Sandman has become more than "just a comic book" to be a masterpiece of storytelling, in any format.

Submarine is a coming-of-age tale of Oliver Tate, a precocious teenage boy, an account of his relationships with family, friends and girls, and his observations of the world around him. It is an intelligent, somewhat poetic read, and one which led me back to my Superior Person's Book of Words to indulge the word-nerd tendencies that I share with the narrator. However, I didn't altogether like Oliver - he was a rather obnoxious kid - and the scenes in which he participated in the bullying of a classmate were an insurmountable barrier between me and the book, and Dunthorne seemed to rely too much on cringe-comedy and explicit content for my tastes - possibly appropriate for a tale about a teenage boy. I'm not saying that I entirely disliked Submarine, but I don't feel that I have gained anything from having read it, and shan't be rereading or watching the film.

When I first read the series a couple of years ago, I wrote, "I'm not sure that The Hunger Games is as amazing as the hype had led me to believe, but it is a very good book, and it was a lot better than the book blurb and my reading taste came together to expect." Catching Fire won me over, and evidently the story lingered in my brain, because over the last months I've had dream after dream about being in that arena, about being Katniss Everdeen. With the hype mounting for the new film which comes into cinemas next month, I am still undecided whether or not I actually want to see it.

The trailer is amazing. Watching it, I felt tears stab at my eyes a couple of times, when Katniss shouts in desperation and love for her sister: "I volunteer!" and the salute to her from the citizens of District 12. And yet - there is a movie already in my mind that I feel a fierce attachment and loyalty to. Flicking through The Tribute Guide which came into bookstores recently, I nearly shouted aloud, "You are NOT President Snow!" (Donald Sutherland is an excellent actor and I am sure he will play the part admirably, but he is not my President Snow.) Some pictures looked perfect, while others I judged as "too sci-fi." Jennifer Lawrence is almost Katniss, Josh Hutcherson a passable Peeta, Gale I never had a very strong image of, so he'll do. Rue. Cinna. Effie Trinket. Prim. All fine. Great, even. It looks a like a great movie.

But I'm still not certain. The concept of the book - children killing each other for entertainment purposes - repelled me, and watching it as a film takes you closer to the real experience, the discomfort of knowing you'll be watching the Hunger Games recreated, rather than reading about them. (Maybe that's just me.) And the other thing: I have a phobia of wasps - can't even say or type the word without flinching, and there is a horrific scene with mutant wasps, or "tracker-jackers." Is this spheksophobia strong enough to deter me from watching the film?

Reading The Hunger Games the second time around, I realise that Katniss' affections could go either way, being manipulated and fabricated before she's really aware that she has any romantic feelings, being formed by her circumstances. Interestingly, on my first time reading the books, if I had any strong opinions on the matter, I suppose I was slightly in favour of Team Peeta, whereas this time I'm veering more towards Team Gale. I wonder what has changed.

I picked up this cosy wartime romance in a charity shop years ago, and forgot that I'd even got it until yesterday, when I wanted a break from the doom and gloom of Panem. I have little time for romance, whether that be Mills and Boon, or chick lit, but occasionally I'll make an exception for a sweet story from the "granny" section of the bookstore, wartime romances, family sagas, usually seeming to take place in World War 2 Liverpool. Wish Me Luck is the story of Fleur, a WAAF (women's branch of the Royal Air Force) girl who falls in love with an RAF officer. Their relationship is marred, not only by the dangers of being in love during wartime, but by their parents, whose own pasts are intertwined by secrets long gone but never forgotten.

Wish Me Luck is a light, easy read. Dickinson's style is simple but warm. She hooked me with the mysteries and kept the plot twisting so that it wasn't predictable. She recreates 1940s Lincolnshire and Nottingham well, peopled with a likeable, well-rounded cast. With one exception. Fleur's mother was too unpleasant, a bitter, shrieking harridan who is never given much development or redemption, and towards the end, I felt that the story tailed off a little. Of course it is inevitable that any book set on the home front of World War 2 is going to feature some sort of tragedy, but it all seemed to come at once, like an avalanche of heartbreak, all at once. Still, Wish Me Luck is a very sweet, "nice" sort of story over all, and despite the deluge of disaster before the happy ending, just the sort of book to cheer me up when I was feeling low.


I wanted to fall in love again, I realised. Not with a man. I’m far too lazy and selfish right now to arrange my life around another person’s. I’m too fond of going where I want, doing what I want, when I want, acting on the spur of the moment without having to be accountable to someone else. No, what I wanted was to fall in love with a story. To discover something brand-new that grabs me by the brain and imagination and takes me entirely by surprise. Something that would mean my life would not be quite the same after having read it. 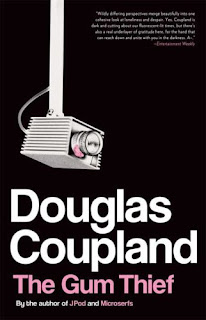 Seeing Douglas Coupland’s The Gum Thief in the library, I wondered if, perhaps, this might be The One. I had vague memories of my friend Anna recommending Mr Coupland - possibly JPod - and Girlfriend In A Coma has been on my to-read-maybe-one-day list for so long I can’t even remember why any more. My friend Anna is very clever and a bit nerdy but in such a way to make it cool, and she likes Neil Gaiman and has purple hair. If she recommended Coupland, maybe I would like him too. Anyway, I’d give him a try. The blurb on the back hooked me: “Bethany discovers Roger’s notebook and finds that he’s writing diary entries pretending to be her - and weirdly, he’s getting it right.”

Of course, when you go looking to spontaneously fall in love and be taken by surprise, you’re doomed to failure. The Gum Thief is entertaining and voices many truths about Life, The Universe and Everything™ - especially if you’re stuck in a dead-end job in retail - but ultimately, I did not connect emotionally with the book. When reading, the pages passed quickly, with multiple narrators and short chapters to keep interest, but I didn’t feel a great urge to return to it when I’d put it down. The book’s tone was subdued. Roger is in his forties divorced and disillusioned, while Bethany is a twenty four year old goth living at home with her mother, with vague plans of visiting Europe with her new boyfriend, but no real plans for the future. I could identify with Roger’s and Bethany’s observations in their working life in a Staples superstore, and I liked the characters well enough, but somehow I felt distanced from their world.

As well as Roger’s and Bethany’s diaries and letters to each other - interspersed with the occasional letter from Bethany’s mother and other Staples employees, many chapters of The Gum Thief are chapters from Roger’s attempt at a novel: Glove Pond. Unfortunately, this novel is bad. Deliberately bad writing - at least deliberate on Coupland’s part - full of dry dialogue, telling-not-showing, faux-intellectual ponderings on life and creative but not quite successful imagery. And when so much of a book is full of bad writing and pretentiousness, even as a literary device, the lingering impression I take away from reading the book is - bad writing and pretentiousness. Glove Pond colours The Gum Thief - or perhaps I should say it sucks out all the colour, leaving a white and grey, cold and somewhat empty-feeling novel.

Or, conversely, maybe the fictional-within-fiction Glove Pond helps to draw attention to what colour does exist in Roger’s and Bethany’s apparently bleak, dull lives. It makes the chapters written by them interesting by comparison. Time will tell which of these contradictory impressions of The Gum Thief is stronger in my mind.