Book to TV: Anne with an E

Here I am, right on schedule to pronounce my judgement on the latest Anne of Green Gables adaptation, Netflix's Anne With An E. In the last two or three years I've been rather pleased by the abundance of different versions of Anne Shirley, what with last year's TV movie starring Ella Ballentine, and the two webseries, Green Gables Fables and Project Green Gables. But how does Anne With An E measure up to the rest?

The Ella Ballentine adaptation attempted to hint at a darker side to the familiar story, but it is a half-hearted effort, with little more than a few flashbacks to Anne's unhappy pre-Green-Gables life to add shadow. Ballentine is sweet and likeable, but her delivery of Anne's peculiar speeches feels calculated for effect; her "depths of despair" are melodramatic but quickly shrugged off. It sticks to the story, but on a surface level; it is the child's Anne. What makes Lucy Maud Montgomery's story stand out from her contemporaries like Pollyanna and Rebecca of Sunnybrook Farm is her deft weaving of light and shadow; the light touch of sorrow makes the joy all the more rewarding. And so, it is not necessarily a bad thing that Anne With An E does explore more darkness than we are used to, mostly in examining how a childhood of neglect, drudgery and loneliness would form a character like Anne, with a second level exploring the attitudes of cliquey, small-town people towards an unknown orphan. There is some room to readjust the balance between darkness and light in this story, but it is a delicate process, to be handled with care, if Anne is not to skew too far either way.

Anne With An E starts off with a superb pilot episode, sticking faithfully to the first fourteen chapters of the book, at least up to the last few minutes. Amy Beth McNulty is a wonderfully lovable and believable Anne - and unlike every other version where her plainness is in name only, her Anne is "terrible skinny and homely," all eyes and teeth and elbows. Her non-stop chatter is humorous and heartfelt, with an underlying desperation to please and to be loved. She is a more traumatised Anne than we've seen before, which does not take away from her endearing Anne qualities, but rather gives them more depth. Her imagination has helped her to survive.

There is a solid supporting cast, especially R.H. Thomson and Geraldine James as Matthew and

Marilla Cuthbert. Marilla in particular is a "Spock" sort of character: it requires great subtlety to correctly convey the amount of emotion that goes on behind the repressed, stern facade, and James plays the part admirably. However, as in several of the other adaptations, it really bothers me that Anne's initial stay at Green Gables is dependent on her good behaviour; it does not sit well with me that Marilla would hold the threat of banishment over Anne like a weapon. Diana is a sweet girl and a devoted friend, without being Anne's shadow, and the series gives a different perspective towards her and her family; there is a noticeable difference in class between the Barrys and the Cuthberts. We also get to see a bit more of Aunt Josephine, and I enjoyed seeing a new side to this cantankerous old lady with a heart of gold. Gilbert Blythe passed the test; the popular boy in class, who is used to getting the girls' attention, mischievous but with a goodness and maturity that hints at the man he will become. Not that there's any room for the lovey-dovey stuff so early in the story, although Anne already doth protest too much.

I am open to different interpretations of Anne; I welcome them. I return to the story again and again because I get something new out of it every time I read it or watch an adaptation; if it was the same experience every time, I don't think it would be alive the way that it is. So I am not going to declare the story "ruined forever!" because another person reads it differently. Some of the scenes shown in Anne With An E did not work for me, but they gave me something to think about. I did not like Anne's frank speculations with her classmates about her teacher's relationship with Prissy Andrews - it seemed more Mary Vance from Rainbow Valley, a character who I view as the antithesis of Anne. And yet there was an innocence even in her scandalous breaking of taboos that she's not even aware of, that makes the scene make sense from another angle. The same could not be said about her lying about skipping school, when the show earlier worked so hard to establish Anne's honesty. 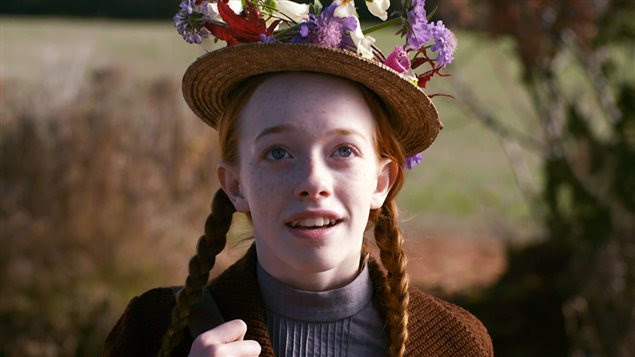 The faithfulness towards book details and historical setting varied wildly. The team worked hard at ensuring the right sorts of potatoes were used, and that Anne's schoolbook was correct, for example, and then might utterly blow it with something utterly anachronistic; a line of dialogue, the use of pinky-fingers in Anne and Diana's oath of friendship, and a progressive mother's group being so progressive that they use the words "feminism" and "suffragette" about twenty years before their first recorded use (if Anne With An E is set in 1876 like the book; the last two adaptations were brought forward to the turn of the century.) And it felt all wrong to show characters such as Mrs Andrews and Mr and Mrs Barry - the Cuthberts' nearest neighbours! - introducing themselves for the first time, when the defining characteristic of the Avonlea setting is that it is a small rural community where everyone knows everything about everyone else's business!

The publicity for Anne With An E, back when it was just called Anne, made a big point about introducing new themes of feminism and being true to yourself - except they are themes that have been in the text all along. Lucy Maud Montgomery was a remarkable woman for her time, very unusual to have a university education and an independent career, and throughout the books Anne defies society expectations with a similar determination. The addition of the minister telling Anne that she needs to learn to be a good wife, or the boys shouting at the girls to get back in the kitchen, felt like a heavy-handed imposition on the storytelling.

After the first episode, the plot takes ever-increasing detours away from the source material. I'm the person who takes note of every digression of the 1985 Megan Follows miniseries/film from the book; it (the first story, anyway) is so faithful there is only minutiae to criticise. I'm less of a purist than I used to be; I went into Anne With An E allowing for a lot of wiggle-room in the treatment of the story. It is an episodic book, so new episodes can be slotted in alongside the familiar ones, giving Anne new adventures without derailing the entire story. I didn't sit there saying "NO, IT DIDN'T HAPPEN LIKE THAT!" but considered each alteration under the question "could it have happened like that?" Sometimes yes, the changes fitted, and other times they did not. Some plot elements, although they did vary from the book, could have been written in collaboration with L.M. Montgomery herself, albeit the older, sadder Maud who wrote Rilla of Ingleside and The Blythes Are Quotes, the Maud revealed in her diaries. Other aspects felt heavily influenced by the Brontes, Dickens and Hardy. The narrative wanders off the path, then comes back for such key moments as the cracked slate, the raspberry cordial and the puffed sleeve dress, usually framed in a new and more sombre context.

But with every step off the path, the plot gets further away from what is recognisably Anne, and I'm sorry to have to report that by the last episode, the series is well and truly lost in the Haunted Woods. Although I had a high tolerance for the series taking liberties with the plotline and the tone, I nearly switched off halfway through the final episode, watching one particular scene with absolute horror and fury. Unforgiveable is a strong word, and at the end of the day, even Anne of Green Gables is only a story, but one character's decision, and one newly-introduced plotline for a cliffhanger, felt like a violation of something precious. By the end, the dynamic of the story has changed, and I'm not sure how Anne With An E can find its way back to the sanctuary of Green Gables.
Posted by Katie Edwards at 18:51 4 comments: