It's been a while since I last updated the blog, and I've now been working in London for almost two months. For the first six or seven weeks, I was living at my aunt and uncle's house on the border of Kent, which was about an hour's commute every day. I forgot how long it takes to get around London, considering that everything is pretty close together - just getting onto the platform of a station is extra time I always forget to take into consideration. So, while I was living with my relatives, I didn't have an awful lot of time or energy in the evenings (or mornings, when I worked late shifts) to do much; I was just working, eating a ready-meal, and crashing, before repeating the same thing the next day.

Yet, I've found that because I'm happier, I haven't needed as much down-time as I usually do, and have filled most of my days off with my cousins or making trips into or across the city to visit friends and relations. I've now moved closer to my bookshop, and most importantly, got my books out onto the shelves; enough to keep me in reading material for the next couple of months, but not quite enough to really feel at home yet, as most of my books are still at my parents'. Now I've got a bit more space of my own, I feel like I can take my life off pause.

I met up with Laura and Bex a couple of weeks ago, in Leicester Square - and for once we did not go book-shopping, but went to a neat little pizza place called Mod, where all pizzas are a set price and you can add as many or as few extra toppings as you like. And as far as I am concerned, the more toppings (and cheese) the better! Bex also brought her best friend Rachelle, and Rachelle's boyfriend, and I invited my sister along too, whose plans for the evening had not quite got around to being organised. It's lovely to be living closer to people, even though I'm in the opposite corner of the city to most people I know, and I do miss my Isle of Wight friends.

I'm not going to be able to spend Christmas with my family this year (perils of working in retail) but one of my best friends from university has invited me to spend a few days with her and her mother. It's a chance to make new Christmas traditions, or just have a really nice one-off holiday. Change is not necessarily a bad things as it means making a new set of good memories.

I worked an additional shift at Gollanczfest this last weekend, which was a great experience. The Sunday event was a masterclass in how to get published, with many prominent writers of science fiction, fantasy and horror, such as Joe Hill, Ben Aaronovitch, Alistair Reynolds and Joanne Harris, as well as some names I've since added onto my watch list, such as Ed McDonald, Elizabeth May and Catriona Ward. (Have any of you read their work?) It's a great opportunity to work on events like these, or even go as a member of the audience; the flagship store in Central London hosts so many book events and signings, although which ones I can attend depend upon which shifts I'm working in my store. I also ran into one of my university classmates who I hadn't seen since graduation nearly ten years ago, although we've kept in touch through Facebook. 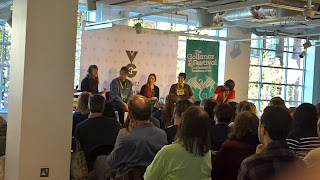 This evening I'm off to another literary event in Forest Gate library, featuring Juno Dawson and Amy Lamé (though this time I'm going as an audience member rather than as a member of staff.) This is part of the Newham Word Festival, a two-week event celebrating the written, spoken and performance arts. Today has been my first chance to properly explore the area where I'm now living, which feels more like a village than the edge of London. I found a little bookshop while on my travels, which has proved to me that I've chosen a good place to live in. Yes, I work full-time in a medium-sized bookshop, but we're not in competition, but allied against the evils of the economy and the website we do not name. I bought a replacement copy of A Christmas Carol and had a good chat with the bookseller.

I think I could be happy here.
Posted by Katie Edwards at 16:48 No comments: