Sunday Summary: May in Review

Wow, it feels like ages since I've written anything on here! Everything's fine, I just haven't felt much like writing reviews lately; I've read plenty of books but not had all that much to say about them. But I might ramble a little about a few of them in this post, we'll see.

Some of the things I've done

My work shifts have been all over the place the last few months, although fingers crossed they'll be getting back to something like normality from now on. We've got a new girl just starting at work, doing Sundays and a couple of afternoons in the week, and my manager told me she reminded her of a younger version of me. Having met her, briefly, I sort of agree. In about a two-minute conversation we compared our to-read piles, favourite books, and I already promised to lend her one of my four copies of Anne of Green Gables. I think reading that book is a quick way to get to know me! Must find out what her equivalent book is. I'm sure she'll have one.

When I haven't been at work I've been writing; I've picked up the children's story I began for NaNoWriMo last year and am giving serious thought to submitting it to Mslexia magazine's First Children's Book competition in the autumn. I've nearly finished the first draft, but have discovered I'm already over the suggested word count for a children's book!

I had a week off a couple of weeks ago and spent a couple of days up in London, staying with my sister Jenny. While she was at work I did some exploring, and some book shopping - although only on the first day. I also went up to Camden Market, which is awesome, and as it was a lovely sunny day, I walked up the road to Primrose Hill, where I spent the afternoon sitting on the grass and reading. The Primrose Hill bookshop is one of my new favourites; it's small and cosy. While I was in there, the bookseller, Chrissie, was whizzing around the shop finding recommendations for one of her regulars who wanted some holiday reading. 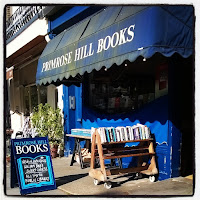 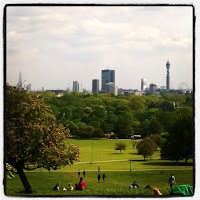 By some fortuitous chance, an old friend, Anna, happened to be in London the same week, and had got in touch with Jenny suggesting meeting up for drinks. So we found a nice little pub next to the British Library, called the Rocket, and spent a lovely evening between there and Pizza Express reminiscing about our schooldays, making little confessions about being horrid teenagers (only a little horrid, as teenagers go, but I think we were all a little relieved to find the others had no memory of the wrongs we'd felt terrible for years for doing to each other.)

And the following day, as a belated birthday treat for Jenny, we went to Shoreditch to Lady Dinah's Cat Emporium for tea: a cafe where cats roam free and say hello to and play with all the visitors. The cats are very well looked after - the entry fee pays for their welfare, they get days off and all have their own members of staff, and there are all sorts of toys and climbing apparatus to keep them amused (although one of the kittens liked nothing better than a scruffy piece of string. Because cat.) 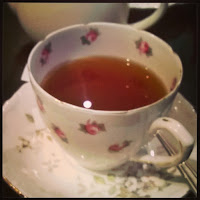 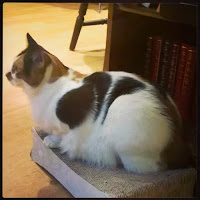 I'm back on the Island now, for the time being, and am enjoying the summer sunshine. It's a bank holiday weekend, and tomorrow I'm heading for the beach. We're nearly into June and it's been quite warm; let's see if I'm brave enough to go in  the sea yet. I've sorted through my to-read shelf and pulled my science fiction books to the front, because for some reason I've come to think of that genre as good beach reading. I've got sci-fi classics (Iain M. Banks, Bradbury, Asimov, H. G. Wells) shiny new or newish books (The Book of Strange New Things, The Peripheral, Speak) and some weird and probably dreadful old books I've found in second-hand bookshops, which I will not name and shame in case I slander unrecognised gems.


Some of the Books I've read:

Beside Myself by Ann Morgan, and When I Was Invisible by Dorothy Koomson

These were publishers' proof copies that my sister got from work, and it was interesting to read them one after the other, because they shared several themes. In Beside Myself, a set of twins swap places as a prank one day - but then one of them refuses to switch back. Towards the end, one of the characters asked something along the lines of "What does it matter? You're twins, you live the same life, what does it matter which name you are called?" But even from a very early age, different expectations are put on Ellie and Helen. One is a leader, one is a follower. One is perceived as a good girl, the other as a troublemaker. People respond to the twins' actions in different ways according to who is perceived to be doing them. It was a dark, troubling read.

Meanwhile, When I Was Invisible follows the lives of best friends Roni and Nika (Both Veronica/ka Harper) whose lives take very different directions after a shared ordeal leads to one betraying the other. Roni returns home after spending several years as a nun, while Nika is trying to rebuild her life after witnessing a terrible crime. Also a rather heavy read, but I found it much more satisfying than Beside Myself.

The Prime of Miss Jean Brodie by Muriel Sparks

What I expected: A gender-flipped, feminist Dead Poet's Society. Progressive teacher shakes up the establishment but earns undying loyalty from her best students.
What I got: Miss Brodie shakes up the establishment, all right, but she is a manipulative, capricious and sharp-tongued woman who has affairs with other members of staff and sends some of her pupils down destructive paths. The narrative is curious, flitting between past and future and casually revealing what the girls' futures hold while they are still schoolgirls. Miss Brodie is rather more interesting and unsettling than the usual inspiring, unconventional schoolteacher figure, a deconstruction of the trope - except for the fact that she pre-dates many of the iconic examples!

Being the second book in my Anne of Green Gables omnibus, I used to read the two books back-to-back as a child, and Avonlea was just as much a favourite as its predecessor. Nowadays, though, I read it less often than Green Gables and Anne of the Island. It's a very episodic book, although the romance between Miss Lavendar Lewis and Stephen Irving towards the end foreshadows Anne and Gilbert's relationship (which for many readers - not this cynical old maid, though - is the main story of Anne.) It was lovely to reread after a few years, to meet Mr Harrison, to spend time seeing the Avonlea Village Improvement Society, to just spend the time with some old friends.

But the character of Paul Irving has come to irritate me no end, although with a feeling of guilt because he is in many ways a lot like Anne. Do different expectations for boys and girls influence what traits one can allow? But then Walter Blythe, in the later books, takes after his mother too, and he is one of my favourite characters. Walter has more depth of character, though, a melancholic temperament, inner turmoil, while Paul's ongoing struggle is with eating all his porridge. He's just so sickeningly good, and the "poetic" temperament Anne sees in him reminds me of nothing so much as Madeleine Bassett from Jeeves and Wooster as an eight-year-old boy.

The original time-travel adventure. I'm only a few chapters in so far, but it reads surprisingly fresh and contemporary, with its succinct explanation of the Fourth Dimension, and the Time Traveller's theories of the future evolution of mankind into a gentle, physically frail and unambitious race living in a paradise - or so it seems at first! This is a book that shaped science fiction as we know it: without it there would be no Doctor Who, no Back to the Future, and everything else would be quite different too!

I'm not sure when I'll get back to blogging regularly; probably not until I've finished my first draft of my work in progress, but watch this space. I will be back!
Posted by Katie Edwards at 16:01 2 comments: