No and Me, Delphine De Vigan

No and Me is another of Richard and Judy's book club picks. This time I have got in early with my blog, as it is fifth on the list and not due to be reviewed on TV for a few weeks yet. No and Me is a deceptively simple book, translated from the French. It is one of those borderline books that appears in both adult and teen sections of the bookshop under different covers. 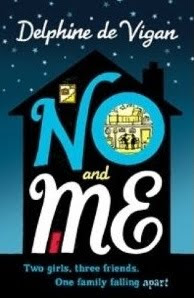 Lou, the narrator, is an intellectially bright but emotionally and socially young girl. At thirteen, she is in a class with fifteen-year-olds (and a seventeen-year-old who has been held back as much as she has been skipped ahead.) She is an only child, and desperately lonely. Her parents seem to have little time for her, as her mother's battle with depression is enough for them to cope with. Lou befriends No (Nolwenn,) a young homeless woman, and interviews her for a school project. When the project is over, Lou realises that she can't just abandon her new friend, or close her eyes now they have been opened to the troubles faced by many around her city.
Lou's narration is full of the hopes and idealism of a good-hearted thirteen-year-old, thinking that she can at least make a difference to one other lonely person's life and help her back into society. De Vigan portrays the innocence of an adolescence with an undertone of sadness. The more jaded adult reader knows that all will not turn out as tidily and happily as Lou hopes, but at the same time, her innocence provokes anger in the question, why not? You find yourself wondering if Lou could be right after all, hoping for a happy ending and trying to fight the deeper knowledge that it won't happen. 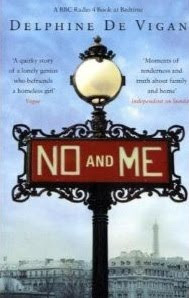 No is, of course, the central character of the novel, and yet it seems we never get to know her, really and honestly. She is a spiky yet sympathetic girl - only eighteen - full of the anger of someone who has had to fight from a very young age to survive. Yet in some of her scenes with Lou we get to see a softer, gentler side to her character, the inner child that street life hasn't managed to crush out of her. But much of her character as shown in the book is of the conflict between the different ways she is viewed by society. For Lou she is a friend who really knows what it is to be lonely, but also a project. De Vigan shows lots of different projects and experiments that Lou works on to keep her brain active and boredom away, and there is the nagging sense that No is just another. Lou quotes the fox from The Little Prince:

All the lonely Lou wants is to be needed. To the adults; to Lou's parents, the social worker and even perhaps to the prejudices of the reader, No is a lost cause. She just doesn't fit into Lou's world.
Just as Lou needs No, so it seems No needs Lou, repeating the same questions again and again, seeking for reassurance:

Even the naive Lou feels a little discomfort at the questions, and recalls:

"I can't stop myself thinking of the phrase I read somewhere, I can't remember where: 'He who's always assuring himself of your trust will be the first to betray it.' And I try to chase those words out of my head."

But once thought, once put onto paper, the doubt remains. Still, when the inevitable betrayal and disappointment happened, I found myself wondering again what No's true motives were. Was she being selfish, was she the untamed wild girl not wanting to be held back by ties to a thirteen-year-old, or did she act to keep Lou from making a terrible mistake? No answers are given to this question. The emotions I felt at the ending challenged me: I felt relief when No left Lou, and at the same time guilt.

No and Me is a slim book with less than 250 pages, quick and easy to read, but difficult to forget.
Posted by Katie Edwards at 23:30