Let's fire up the Quattro. 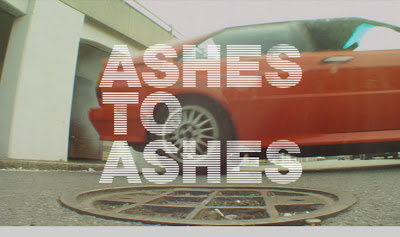 After the phenomenon that was Life on Mars, it was not too surprising that Gene Hunt would appear on our screens once more, in another Bowie-song-titled series. This time it is 1981 and the much-loved anti-hero and his team have been transferred down to London. The series has undergone a glamorous makeover and now we land at the beginning of the New Romantic movement. The new titles blare with squealy guitars, and of course Hunt has a shiny new car: the iconic Audi Quattro.
One member of the Life on Mars team is notably absent: protagonist Sam Tyler ended the series 2 finale by committing suicide, sending himself (temporarily) back to 1973 where he felt he belonged. Time moves differently there, and he spent six happy years in the seventies before his fate caught up with him. This time it is police psychiatrist  psychologist Alex Drake in the fish-out-of-water role. Back in the 2000s, Alex had been investigating Tyler's death, and therefore when she arrives in 1981, she has a little background knowledge of DCI Hunt, DS Ray Carling and DC Chris Skelton. Seeing that, as far as Alex is concerned, they and their world were dreamed up by a comatose Sam Tyler, and considering that her last memory was of being shot in the head, it is not unreasonable for her to assume that she too is unconscious and dreaming. Unfortunately for her, Hunt, Carling, Skelton and newcomer Sharon "Shaz" Granger won't accept their roles as sidekicks in her story, and object to this newcomer strutting around as if she is the only person who matters - or even really exists.
Introducing a strong-willed female counterpart to Sam Tyler - and one whose first 1980s outfit is that of a prostitute - adds a new angle to the love-hate relationship between old and new methods, and of course between the characters themselves. As far as Gene is concerned, Alex "Bolly-Knickers" is a posh, smug - but strangely sexy - know-it-all, and Alex considers Gene a misogynistic neanderthal (but ditto the strangely attractive factor.) 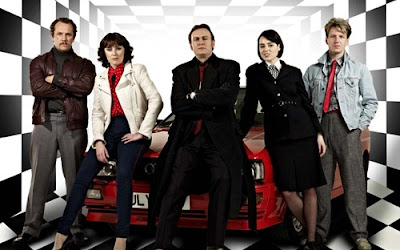 In Ashes to Ashes we get to see deeper sides to the characters introduced in Life on Mars. Ray Carling, (Dean Andrews,) who was not portrayed wholly sympathetically in the original series, softens in his attitudes, showing more respect to Alex than he did to Sam. The moment where I found myself warming to him was in the third episode when he is awkwardly compassionate towards a young woman taking refuge in the police station. Chris Skelton (Marshall Lancaster) has matured from the nervous and rather dim youngster he was in Life on Mars and is in a romantic relationship with the rather lovely Shaz Granger (Montserrat Lombard.)
As in Life on Mars, while Alex tries to get used to her new life in the '80s, surreal happenings keep imposing on her, cementing her belief that she is in a coma and dreaming. As well as seeing her daughter Molly in a time before Molly even existed, every so often the clown from David Bowie's Ashes to Ashes music video turns up taunting her, like the Test Card girl in Life on Mars. She also has to deal with meeting her parents, who died when Alex was a little girl. In 1981. The first series deals with Alex trying so desperately to change her past and prevent the bomb from exploding and killing her family. But alas, as we saw in Life on Mars, it seems that you just can't change your own history.
Or so it would seem. In series two, Alex meets another time traveller from the early twenty first century. The plot around Martin Summers challenges everything you think you know about the rules of time travel in this story's world, when he does something that really, really screws up his own timeline.
Posted by Katie Edwards at 00:54