Cross My Heart and Hope to Spy, Ally Carter 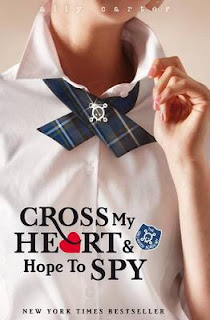 Perhaps it's because I accidentally came into the Gallagher Girls series at book 2, but Cross My Heart... did nothing for me. The premise was great: an elite boarding school is actually a school to train young woment to become spies. Brilliant! I always had a soft spot for boarding school stories, especially the more unusual schools like the Chalet School (or Hogwarts.) And the Gallagher Academy is one of the stranger. While Chalet School girls are fluent in three languages, Gallagher Girls speak up to fourteen. They develop skills so that they can appear to be anyone or anything they like: writing with their non-dominant hand, they have photographic memories, can fool lie detectors and tell you exactly how many people in the room are wearing purple socks (for example.)

All interesting and highly unlikely for high school students, and unfortunately I couldn't even believe it in the context of the story. The main character, Cammie "The Cameleon" is has a reputation for being one of the best young spies (a contradiction in itself, surely!) and yet in Cross My Heart she can be so incredibly stupid. She and her classmates demonstrate this on a countersurveillance exercise - there are spies watching you, you don't know who they are, you have to shake them off and get to a certain place at a certain time. Now is NOT the time to start chatting up the boys. Especially when you have just found out that there is a boys' spy school out there, a fact which, by the way, shouldn't be quite such a shock when you yourself go to a spy school no one else knows about. She doesn't seem to learn, either, seeming to forget half the time that she is a spy, and the other half of the time that Zach who she has a love-hate relationship with, is also a spy. Trust no one!

Despite their rigorous training, I found it difficult to believe that the Gallagher Girls were entirely serious about their vocations: whenever they set up surveillance on the headmistress, and later on the Blackthorne boys, it read more like a Mystery Kids or Secret Seven story with top-of-the-range gadgets. Surely such training requires the girls to be single-minded in their training, but instead they were double-minded: they thought of exactly two subjects throughout the book - spying and boys. Mostly boys. From the moment they see the Blackthorne boys, Cross My Heart fails the Bechdel test - the female characters talk only to boys or about them. I'm not saying this is unrealistic for teenagers in a formerly all-girl school, quite the opposite! Unfortunately it doesn't help to flesh out the characters, and I found it difficult to keep track of which name belonged to which of Cammie's classmates. It might have helped if I'd read the first book in the series: I'd Tell You I Love You, But Then I'd Have To Kill You (Imagine having to type that multiple times in a blog!)

There were a couple of problems that I had with this story that were resolved at the end, especially regarding some of the headmistress' decisions. Early on, Cammie and her friends suspect that the head (who is also Cammie's mother) is up to something dodgy. Now, surely if you're head of a spy school, you wouldn't conduct suspicious business where the girls would use the skills you've taught them to uncover your secrets! And secondly, I thought it highly unwise of her to introduce half a dozen handsome boys into a school full of hormonal teenage girls and expect them to carry on undistracted. In the end, though, it turned out to be all a test, and the head's realisation that running an all-girls' school left the students ignorant of half of the world's population - not a good place to be if you want to be a spy! Unfortunately, the one plotline where I thought there was genuine danger out of a classroom context, was also part of the test, leaving me once more feeling that the Gallagher Girls were just playing spies.
Posted by Katie Edwards at 21:04