Series three is where Ashes to Ashes really gets weird. At the end of the Series two finale, Alex is shot in 1982 and wakes from her coma in 2008... only to find Gene Hunt talking to her through her TV screen. Up until this point, it seemed fairly straight-forward. Even if in some respects the time-travel was real, it is a parallel reality reached through being in a coma. But if Alex is in a coma in the coma-world, just what is real?

In this final season, it is not only time-traveller Alex who would have strange hallucinations and experiences, but also Ray, Chris and Shaz. Each saw stars in the sky "as if they were standing on the edge of the world." Also, each had a significant character-defining episode in the series, where they faced challenges, and overcame them and proved themselves worthy coppers. And when this happened, the screen went dark, they heard a couple of seconds of the song "Life on Mars," and laughter, voices, the sound of a pub. Not just any pub, but the Railway Arms, that gang's hangout back in the Manchester days. 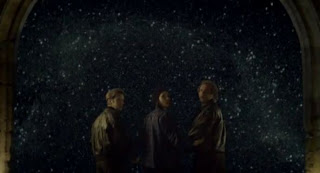 For the first two series of Ashes to Ashes, I found Alex Drake an immensely irritating character, unable to get past her idea of the world existing only to serve her purposes. In series three, she has mellowed and is more likeable - but perhaps that is because there is an even more annoying character: Jim Keats. (Daniel Mays.) Keats is an officer from the Discipline and Complaints department, investigating Gene Hunt's department and spreading discord throughout his team. He brings up the subject of Sam Tyler's (1979) death and tries to persuade Alex that Gene Hunt had a hand in it.

When series three was being shown on TV, but before I had caught up and was avoiding it, I couldn't help hearing my family and friends discussing the character of Jim as a character designed to question what we thought we knew of Gene Hunt. However, there was no such ambiguity. I could never take seriously the suggestion that Gene was a murderer - or even that he was less than the morally-dubious-but-ultimately-good person we'd come to know. Especially not coming from such a character as Jim Keats, who was just plain creepy. Just watching him smarm around, making pronouncements and insinuations with his rubbery, sneery mouth and unsubtly trying to persuade Gene's team to come and join him, made me want to take a long shower.

I started to have my theories about Keats' identity when he made sure that he was present when two police officers died: first a one-episoder, then a supporting member of the team from the beginning. In the first death scene, he was creepy, but seemed that he was at least trying to be comforting. The second was frankly terrifying. The dying policeman was obviously in pain and distress, and Keats did nothing but held his head still, and waited. Was he some kind of Grim Reaper, I wondered? Or worse? And then it was pointed out that both officers failed.

In the grand finale, when all is revealed, I both had an inkling of where the story was going, and simultaneously had to do mental gymnastics to keep up. It seems that everyone was dead: Alex died from her gunshot wound, Ray, Chris and Shaz all were killed at various points in time before ending up in this world, which must be some kind of purgatory. And Gene Hunt. Not only is Gene dead, but he died as a very young policeman in 1953, and has been here ever since as a guardian angel sort of figure, training up his team until they are ready to "move on." (Oh, and in this world Heaven is a pub!) Jim Keats, his nemesis, is revealed to be either the Devil himself, or one of his minions.

When I was watching Ashes to Ashes, I had wondered if "the answers" to the series' mysteries were hinted at by the titles: Life on Mars showed Sam Tyler finding his life's meaning in a strange world, and Ashes to Ashes, from the funeral service, had an awful lot of death themes in it. However, I dismissed the idea that it was actually set in the afterlife, because the epic series Lost had its conclusion on the same weekend, and revealed to have that same explanation. Actually, Ashes to Ashes aired first, but I insisted on being told nothing about it. I wasn't a fan of Lost, but my sister had told me enough to keep me curious.

My first reaction to the great revelation was "Where did that come from?" But after a few moments' contemplation, I realised I wasn't disappointed, because the clues had been woven in from the start, if I knew to look for them. However, I would be interested to watch the whole five seasons of two series with that extra knowledge of what was going on, and see how it changes my understanding of the story.
Posted by Katie Edwards at 01:11