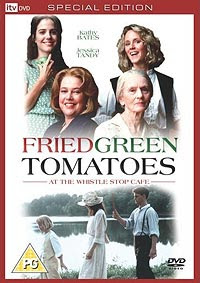 I rarely buy DVDs I haven't watched before, but Fried Green Tomatoes was an exception to that rule. I unpacked the book at work, and on reading the blurb on the back, I remembered a friend had recommended the film to me. I went to see if it was on sale the road. It was - for £5! so I bought it.
Fried Green Tomatoes is a very American film - not in what I think of as the modern USA, full of shopping malls and big cars, but an old-fashioned America, still a new country of joy and freedom and really close-knit communities, but a lot of danger and darkness too. I'd say it was a feel-good film, which would be strange when you look at some of the things that appear in it: lots of death, racism, domestic abuse, murder - and what happens afterwards - but over all of this, it is a film about friendship.
There are two parallel stories in this film: the story of Evelyn, an unhappy housewife, with rather a Homer Simpsonish-husband. She meets Mrs Threadgoode at a nursing home who tells her the story of a girl in her family - Idgie, and her friendship with Ruth, her late brother's fiance, growing up through the '20s onwards. 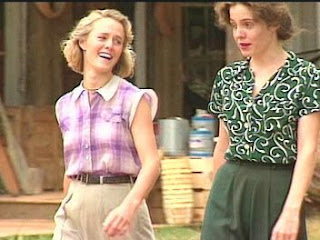 Idgie is certainly the strongest character - a real tomboy, who makes me think of a C20th Calamity Jane (though that may have something to do with the show I'm currently taking part in) crossed with Robin Hood. She wears men's clothes, gambles, drinks, hangs around some rather unsavoury characters - but there is nothing she wouldn't do for her friends.
As the story progresses, Evelyn turns from a rather wet down-trodden Southern housewife to a feisty woman who knows her own mind, encouraged by Mrs Threadgoode's storytelling - though she does develop somewhat of a destructive streak along the way, "accidently" bashing the car of two bratty teenagers who steal her parking space (six times) and knocking down a wall in their house to let the light in. More importantly, she learns to stand up for herself and do what she believes to be right despite opposition - such as inviting her new friend to live with her and her husband after the old lady leaves the nursing home.
Fried Green Tomatoes has some tear-jerking moments, so be prepared and have some tissues handy - not so much at the deaths of beloved characters, I found, as when Mrs Threadgoode arrives home to find her house has been destroyed as it was unsafe to live in. The pathetic sight of her, sitting on her suitcase asking, "Who'd want to steal my house?" is unbearable. 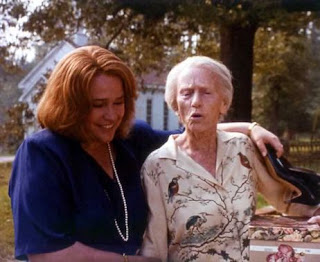 But the film is full of funny moments too - though one or two are rather horrible at the same time. The obvious is, of course, when one realises just why no body was ever found of Ruth's abusive husband. It brought be right back to a gruesome nightmare I had about five years ago that has prevented me from being able to eat McDonald's food since...
I have to say that Fried Green Tomatoes, though they are presented as a great delicacy, don't much appeal to me (because I don't much like any kind of tomatoes.) All the same, I'd choose that over Big George's barbecue - even if it is the best in Alabama.
Posted by Katie Edwards at 13:36