Another Tuesday, another top ten list (although not technically part of the Top Ten Tuesdays series.) I'm taking one week of Rinn's Sci Fi Month to focus on Star Trek, which celebrated fifty years earlier this year. I've reviewed most of the films over the last few years, and I'll leave links to these at the bottom of the page. Today is the turn of the TV series, and I'll be going through my favourite episodes of all time. Please note, though, I am a relatively new Trekkie, and am still working my way through the later series, so this is not a comprehensive list, and only covers the original series, the Next Generation and the first half of Deep Space Nine.

10. The Naked Time (Original Series.) In which the landing party brings a substance to the Enterprise that brings out the crew's deepest suppressed desires and emotions, a great way of getting to know the cast better than perhaps they might like. Also, Sulu steals the show with a fencing foil.

9. Sarek: A devastating episode exploring the decline of a great man, the Vulcan Ambassador Sarek (father of Spock) who is suffering from a Vulcan disease which means that his much-prized logic is overpowered by uncontrollable emotion. All the more heart-rending because we've seen the character at his height through the original series and films.

8. Best of Both Worlds (Next Generation) Not the Borg's first appearance on the show, but their most harrowing; we learn what they are capable of, and it is a beast of a season-ending cliffhanger!

7. The Measure of a Man (Next Generation) A scientist wants to dismantle Lieutenant Commander Data. Data refuses, and a court appeal is launched to determine whether the android is a person or the property of Starfleet.

6. Trials and Tribble-Ations (Deep Space Nine/Original Series) A light-hearted celebratory episode, in which the Deep Space Nine crew travel back in time and have to save Captain Kirk and the original Enterprise from a sabotage. A thrill of nostalgia, a marvel of digital engineering to place the new characters into a classic episode. And you get to see why it looked like someone was behind the scenes throwing tribbles at Captain Kirk. Because they were, and they were Captain Sisko.

5. Journey To Babel (Original Series) In which we meet Spock's family, and the Vulcan is torn between familial loyalty and his duties as an officer of the Enterprise.

4. Darmok (Next Generation) A heartwarming tale of communication between species without a common language. Logically the premise falls to pieces if you look too closely at it, but it's rather ingenius and wonderful nonetheless.

3. The Visitor (Deep Space Nine) I was in two minds whether I love this episode or hate it. I had to put some space between me and Deep Space Nine for a few days after watching this as it emotionally destroyed me for a while. The story shows an alternative timeline in which the main character, Captain Ben Sisko, is killed, and the impact it has on his son Jake through the rest of his life - especially when it turns out the Captain isn't dead after all. You spend three years falling in love with these characters and then an episode does that and breaks your heart. Beware.

2. Amok Time (Original Series) In which we visit Vulcan for the first time and learn a great deal about its culture. Also about biology... Vulcan biology... ("You mean... the biology... of Vulcans?") By equal measures comic and heart-wrenching, it gives us "Live long and prosper," the iconic Vulcan salute, and a rare moment of pure joy from Mr Spock.

1. The City on the Edge of Tomorrow (Original Series) In which Kirk and Spock have to travel back in time to rescue Doctor McCoy. They have to try to make a living in 1930, and Kirk falls in love. But the universe requires a sacrifice, and there is no easy solution this time. 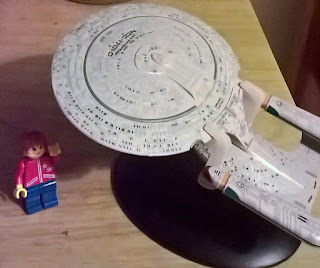 I have previously reviewed most of the Star Trek films on the blog. Links are below:

I. The Motion Picture
II. The Wrath of Khan
III. The Search for Spock
IV. The Voyage Home (The One With The Whales)
V. The Final Frontier
VI. The Undiscovered Country
VII. Generations
VIII. First Contact
IX. Insurrection
X. Nemesis
XI. Star Trek 2009

I have not yet reviewed Star Trek Into Darkness or Star Trek Beyond, but as a bonus you can read a mini-review of Galaxy Quest here.