What was the difference between strung-together neurons and a simple bundle of if/then code, if the outward actions were the same? Could you say for certain that there wasn't a tiny mind in that bot, looking back at the world like a beetle might?

- A Closed and Common Orbit by Becky Chambers


It was quite by chance that I found myself reading Becky Chambers' second novel A Closed and Common Orbit at the same time that I finally got around to watching season one of Humans this month. Both works are based around artificial intelligence beings in humanoid bodies. As such, the book and TV series explore similar themes, although they go about it in very different ways. 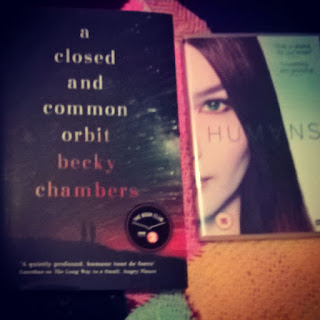 Humans is set in a Britain that is superficially identical to that of today, but for one exception: the existence of Synths. Synths, or Synthetic people, are machines, created to help around the house, whether as domestic servants or care workers. They look like beautiful people, are capable of responding to a wide variety of conversations, but are not capable of independent thought outside their area of purpose. Nor do they have feelings like humans do - at least, that is the popular belief. However, early on, we learn that there are a few synths out there who have been programmed to have emotions, to think for themselves, and are nearly indistinguishable from humans. Only their green eyes and some of their stilted mannerisms give them away as synthetic. But it is that emotion that worries people, because where synths can have feelings and opinions, then they cannot be controlled. The scientists studying these enhanced synths have difficult decisions to make. If they destroy a being that looks, thinks and feels like themselves, where is the line between recycling technology and murder? But if the enhanced synths can go about unchecked, what does it mean for the human race? Even more complicated is the man who is being kept alive by synth technology, many of his memories recorded as audio and visual data. There are such advances in medical technology being made all the time, but at what point does the technology overtake the humanity?

A Closed and Common Orbit, by contrast, is a "far-future fiction" set in space, in a galaxy where humans mingle with diverse alien races: the Harmagians, Aandrisks, Aeluons, and many others. Artificial intelligence is a part of everyday life; there are AIs in the ships, delivery drones, artificial pet-bots and so on. But it is illegal to house an AI in a human-appearing (or other species) body-kit. One of the novel's two protagonists is one of those illegal AIs. Sidra is a ship's AI computer system installed into a body kit, and it is a huge struggle for her to adjust to this limited (to her) way of life. She is used to being able to process multitudes of information at once; see every view from the ship's cameras, be connected to the "linkings" (like our internet) at all times so that she can instantly access anything she needs to know. Now she's trapped in a perfectly lifelike body kit that can only see what is before her eyes, only process one thing at a time, only know what is stored in her memory files. Becky Chambers does an excellent job of helping us understand how limiting a human body must be to a computer, and consistently emphasises that the body kit is not really Sidra. She is the code installation, and would be herself whether she was in a ship, a body kit, or any other technological device. Because as a computer installation she cannot experience touch, smell and taste, these are translated into associated images - a soothing beverage triggers an image of a sleeping cat in sunlight, for example. It's an awesome exploration of how an AI being made of code, though they may be indistinguishable from a human to the eye, would experience the world very differently.

The fear of being replaced is a recurring theme in Humans, from the genius schoolgirl who worries about her future career options being eroded away and all positions being filled by the efficient Synths, to the husband whose disabled wife relies more on their live-in Synth assistant and doesn't seem to need him any more. And throughout the series, conscious Synths are viewed as a threat, by scientists and by some of the people who come into contact with them. Some are indeed dangerous, in particular Niska, full of cold fury. Others, such as wide-eyed Max and motherly Mia, are all goodness. They are formed by their experiences and their temperaments, but ultimately all they want to do is to be left alone and live their lives.

When the subject of AI body kits is first introduced in The Long Way to a Small Angry Planet, the prequel to A Closed and Common Orbit, the character making the enquiry is sternly warned off. He doesn't know the risks, he is told. Quite aside from the danger of being caught, arrested, the "kit" destroyed and the installation erased, this is untested technology, and you just don't know what might happen if you start meddling with what it means to be a person. But in A Closed and Common Orbit, we don't really get to see the reasons behind the ban. It takes Sidra the course of the novel to adjust to her new life in a humanoid body kit, but the other dangers are not really explored. Of course, in a universe where humans are small, humble dwellers of a diverse interplanetary community, one more kind of life form isn't going to make many waves. In a setting such as the Britain of Humans, our position at the top of the food chain comes under threat, and we don't like it. But by the time of Becky Chambers' books, we have learned to take our place alongside others. It can surely only be a good thing to learn a bit of humility, that perhaps we will not always be the dominant species and to take care of how we treat the universe and other beings.

My review of A Closed And Common Orbit is due to go online Friday.
Posted by Katie Edwards at 10:00