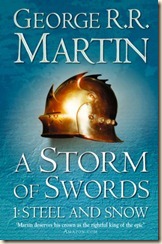 
A Storm of Swords is the third part of George R. R. Martin’s epic fantasy series A Song of Ice and Fire, and is in itself enough of an epic that the paperback has been split into two volumes, no doubt to save the book from ripping its spine in half on the first read. A Storm of Swords gets going more quickly than the last volume, whose first half, though still interesting from a world-building and character point of view, read more like the set-up for a big climax rather than actual plot development.

In the north, young king Robb Stark continues to fight his battles largely offscreen, and it’s not going well. Though winning his battles, for now, a few foolish moves from Robb and his advisors lose him allies left, right and centre. The Starks seem to be barely staying afloat, and surely their good fortunes can’t last much longer against the might of the Lannisters, as well as all other pretenders to the throne.

Meanwhile, in King’s Landing, the main event is King Joffrey’s upcoming wedding. Twelve-year-old Sansa has been reprieved, for now, and instead the King is to wed with would-be King Renly’s widow, Margaery Tyrell. I enjoyed meeting Margaery, and particularly her formidable grandmother, who befriend Sansa, who needs as many people on her side as possible. But I don’t quite trust them. Although they know what sort of a person Joffrey is, they act too confident about the wedding. Their attitude seems to be, “It’s all under control, don’t worry your pretty little head about a thing.” They’re plotting something – but I’m not convinced that it will benefit Sansa.

Still, she’s safe from marrying our dear Joffers – instead she’s been married off to his uncle Tyrion, a sore blow to the former romantic dreamer. Tyrion is hardly the dashing groom she had hoped for – at least twenty years her senior, malformed and an eyesore. Still, in my opinion Sansa could do much worse: Tyrion may be the one man in Westeros who would actually respect her.

And I have a strong sense of foreboding about the marriage ceremony. The Lannisters have not made themselves universally popular, ruling rather by fear than by love. One of the wedding guests, the representative from Dorne, has not shown up, instead sending his brother who wants revenge for wrongs done his family by the Lannister-Baratheon regime.

This volume shows another side to the scheming Lannisters. So far, Cersei Lannister has been shown rather as the wicked queen, but this volume depicts her as having no more control of her own fate than Sansa, with her father arranging to marry her off to some nobleman or other for political reasons. Similarly, her twin brother Jaime, for the first time given his own point-of-view chapters, is not the big tough knight that he has formerly seemed. Instead, Martin turns our expectations on their heads, showing this golden knight and kingslayer bested at swordfighting by a young woman, and breaking his resolve not to cry out at injury.

Up north of the wall and away from “civilisation,” Jon Snow continues as a spy among the Wildlings. He has been urged to “Do as they bid you… but in your heart remember who you are. Ride with them, eat with them, fight with them, for as long as it takes.” But with his every action aiding the Wildlings to convince them of his loyalty, and with no opportunity presenting itself to rejoin his post at the Night’s Watch, I find myself wondering how far can one act a part before “remembering who you are” becomes meaningless. And now he’s fallen in love, that “remembering” must surely become more and more tricky.

Now the Wildlings have breached the Wall and invaded Westeros, unbeknown to the feuding kings, who would be better off uniting to save their kingdom. Or would they? First portrayed as lawless savages, the ways of the wildlings, or “free folk” as they name themselves, seem more sympathetic now, and quite persuasive.


“In the northern wastes a horde of hungry, savage people steeped in the dark magic of the wilderness is poised to invade the Kingdom of the North […] if the Wall is breached, no king will live to claim [the throne]”,

reads the back blurb, but all in all, imposing as they are, the Wildlings are just another army of men. Even the giants, the monsters of old wives’ tales, when actually seen are not so terrifying. It’s what else lives behind the wall that poses the real threat to mankind: the walking dead, terrifying creatures with ice-blue eyes known only as the Others (or zombies, to the genre-savvy reader.)

Part one of A Storm of Swords ends with reader frustration as two sets of characters who have been parted from early on in the series, come this close to being reunited – but have no idea that who else is near, and pass each other by.

With so much going on, clearly more happens in some plotlines than others, and I can’t write of every character with a point-of-view chapter. Arya has the most chapters, yet they are taken up mostly with travelling, falling in with different people for a little while. But she does overhear an old woman talking of her dreams, which are almost certainly prophetic in nature.


“I dreamt I saw a shadow with a burning heart butchering a golden stag, aye.

I dreamt of a man without a face, waiting on a bridge that swayed and swung. On his shoulder perched a drowned crow with seaweed hanging from his wings.

I dreamt of a roaring river and a woman that was a fish. Dead she drifted, with red tears on her cheeks, but when her eyes did open, oh, I woke with terror.”

Now, as it stands, I can’t make any sense of the middle dream, except that the crows are often used as a symbol for the men of the Night’s Watch, where Jon is based. (They are also symbols of death, and of Bran’s psychic dreams, so that doesn’t narrow it down much.) But I’d like to hazard a guess at what they other two may foretell.

The first dream is fairly straightforward: the burning heart is the symbol of the new religion taken up by King Stannis and his advisor the red priestess – who conjured a shadow assassin – probably – to slay Renly. The stag is the badge of the House of Baratheon. I realise I misremembered it as Lannister and thought that it predicted Jaime’s death, being the golden knight, but the Lannisters are Lions (of course.) – Instead I think it either reveals the truth of Renly’s death, or foretells that Stannis will suffer a similar fate.

The “woman that was a fish” is a more tricky prophecy – but the fish is the sigil of the House of Tully, of which Catelyn Stark, mother of Robb, Sansa, Arya, Bran and Rickon, is a daughter. And she has reason to weep tears of blood, believing her sons Bran and Rickon to have been violently murdered. But the fish was dead – and yet opened its eyes with terrifying effect. I’m going to go out on a limb and predict that a fate worse than death awaits Catelyn – the Others will get her and she will become a zombie.

Crazy suggestion, I know, with nothing else in the text to support it, but after all, the Wall has been breached, and the north of the kingdom will be the first to fall. Where the Wildlings go first, the Others could follow in their path. I’m not entirely sure where Catelyn, Robb et al are based right now, but surely they will try to reclaim and rebuild their northern home, Winterfell at some point?

Perhaps part two will hold the answers – or, more likely, pose twice as many questions.