When Cooger and Dark’s Pandemonium Shadow Show comes to town in the middle of the night, best friends Will and Jim sneak out of their homes to investigate – but once in, the boys are ensnared in the carnival’s dark secrets, and it doesn’t want them to leave. 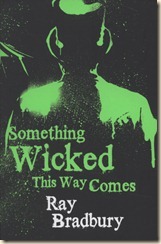 Though only 260 pages, I found Something Wicked… quite a slow read, because Ray Bradbury works his words hard: telling a story, making poetry and music, capturing snapshots and philosophy, evoking terror and joy and exploring just what it means to be human. Stunning and extraordinary, Something Wicked… is full of memorable characters and rides: Cooger and Dark, the Illustrated Man, the Dust Witch and the Seller of Lightning rods, the mirror-maze and the carousel that ages its riders up or down with every turn. There is something terrifying in the manipulation of time on the body: I was reminded of the creepiest parts of Charlie and the Great Glass Elevator, Harry Potter’s Department of Mysteries, and the Master’s torture of the Doctor in Doctor Who. Bradbury has created a circus that will trouble the mind long after the pages have closed, and I suspect I’ll never feel quite comfortable visiting a fairground after dark again.

When oyster-girl Nancy Astley falls in love with a male impersonator on the stage of the music-hall, her greatest dream comes true when Kitty asks her to come with her to London. After spending time employed as Kitty's dresser, Nancy is asked to join in her act, and it soon becomes inconceivable to think of one without the other, whether on or off the stage. But after the dream comes the waking, and when Kitty abandons Nan for a man, Nan finds herself a single woman having to make her own way in the harsh world of Victorian London.

Though nearly 500 pages, Tipping the Velvet is a quick read, a page-turner. Sarah Waters keeps the story fresh by changing Nan's situation regularly and introducing a cast of memorable characters, both lovable and awful. The story is told in stunningly authentic period language, and enlightening about the underground gay and lesbian cultures of 1880s and '90s London. Tipping the Velvet is hilarious and heartbreaking, more than a little saucy, but I felt that there was a sad, sordid feel to it in the middle sections - a sense that Nancy doesn't value herself and lets others take advantage of her - before she finds a place for herself among the socialists, feminists and "toms" of the East End.

Tipping the Velvet is a brilliant exploration of sexual and gender identity, but more, it is a gripping story. Ms Waters writes with confidence and poetry, and this book is all the more remarkable for being her first novel. It is a masterpiece from one of Britain's greatest contemporary writers.
Posted by Katie Edwards at 17:58