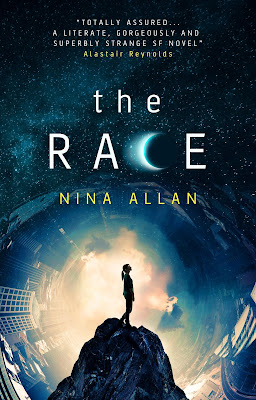 I admit it, I bought this book without any knowledge of what it was about because the cover was pretty! That worked out pretty well for The Long Way to a Small Angry Planet earlier this year, which I still can't shut up. It seems that I have a weakness for pictures of starry skies. (Just look at my blog background for further proof of this.)

The Race is a book in five parts, each one focusing on a different character, but these five parts make up two stories which are linked in some way. The first part, "Jenna" is set in a bleak future, a place recognisable as the South East of England, but in a dismal landscape that has been ruined and poisoned by fracking. Jenna and her brother Del try to make their way in that world, in a town whose main attraction is the illegal racing of smartdogs - greyhounds which have been genetically modified with human DNA. Del is an angry, bitter young man, only softened by the birth of his daughter Luz Maree (known as Lumey.) But when Lumey is kidnapped, everything changes.

Nina Allan creates a convincing society in the first part of The Race, a world that draws you in. The narrator, Jenna, is smart and endearing, but I felt that her brother Del's characterisation did not ring true. He just didn't seem all that bothered about his beloved daughter's safety, and as he focuses on raising the ransom money by winning a smartdog race, his priorities shift towards the winning; he seems to almost forget about why he's doing it. If the end goal was anything else, I could accept him being sidetracked, but not when the life of his little girl is at stake!

The second part, "Christy" switches to our own world, or something very like it. I was warned by Ellie's review that if I was expecting the book to be all about fracking and smartdogs, I'd be disappointed, so I went into The Race without any particular expectations. Yet as I engrossed myself in part one, I still got drawn into Jenna's world and story, then felt a little bit cheated as Allan revealed how the stories fitted together. When you read a sci-fi novel, you know it's fiction, and yet you trust the author to let you suspend your disbelief for a while. But within the "Christy" segment, Allan gave a new context to "Jenna," and it felt like a cop-out, at first. If she'd given us the stories in a different order, there may not have been that feeling of betrayal - but also, the novel would be less remarkable. And there are one or two hints that the link between the two settings is not as straight-forward as it initially appears.

The third part, "Alex" follows on from Christy's story from a different perspective, giving a sort of commentary on the novel the characters are in, where different timelines and lives bleed into each other in ways that they shouldn't. Then for the last two parts we return to Jenna's world, several years after Lumey's induction. Yet there are inconsistencies here too. Place names, spellings have changes since the first part, and we seem to have travelled further away from the real-world setting than would be likely in the time that passed since "Jenna." It's almost as though every character has not only a slightly different perception of reality, but that reality itself is different for everybody. What if everyone lives in intersecting but subtly different worlds?

The Race is an intellectually fascinating read, full of deep ideas about communication, about perception of the world, and with a bit of meta-commentary on the writing of a novel. It takes the familiar and makes it strange. The plot is a bit sprawling and untidy, but full of twists and revelations, and I appreciated that Allan does not spoon-feed the reader with all the answers, but leaves you to draw your own conclusions. But unfortunately, after being lured in by an incredible first segment, then having the rug pulled out from under my feet, I lost a bit of my emotional investment in the actual story. Still, it is a book with a lot to say, and I think it would benefit from a second reading to see what I missed first time around.