Did I ever mention how much I enjoyed Becky Chambers' debut novel The Long Way to a Small Angry Planet? (Chorus: "Yes Katie, you did.") More often than not I prefer reading stand-alone novels to series, but I reached the end of Small Angry Planet utterly engrossed in Chambers' world-building and in love with her characters. One book just wasn't enough to skim the surface of the universe she had built, so I was thrilled to discover that there was to be another book in the autumn - if simultaneously somewhat apprehensive. Could any sequel possibly live up to the memory of the first masterpiece? Surely it couldn't? 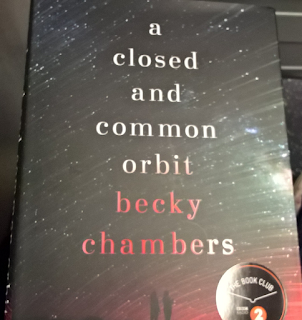 Well, for once I can tell you that YES, I loved A Closed and Common Orbit just as much as the Small Angry Planet, or as near as makes no real difference. But although it follows on from the events of the first novel, it is not a sequel as such, and focuses on two characters who have only briefly been introduced: Pepper, a good friend of the Wayfarer's technician Jenks, and Sidra, who is sort of brand-new, but also sort of familiar under a different name. The narrative is told in alternating chapters; Sidra's tale in the present day, and Pepper's backstory, starting from twenty years earlier when she was known as Jane 23.

Sidra was formerly a ship's Artificial Intelligence (AI) responsible for monitoring and running all systems on a spacecraft, while having access to any information required at any time through the Linkings (or interstellar internet.) But due to events beyond her control, she has been housed in an illegal human-appearing body kit, and she struggles to adjust to this very different, and to her mind much more limited, sort of existence. Helping her through the process is Pepper, whose life as a mechanic at the busy and diverse Port Coriol is worlds away from where she started as a genetically engineered slave on a fringe planet. But as she works to help Sidra learn what it means to be alive and live like a human, she is reminded of her own journey of discovery years before.

Although I was a little sorry not to spend the course of another book aboard the Wayfarer with Ashby, Rosemary, Sissix and the others, once more Becky Chambers creates a cosy cast and warm friendships that it is a joy to be a part of. It is a celebration of love and self-made families, of curiosity, and a re-examination of what we take for granted, what it means to be alive. It flows beautifully on from The Long Way to a Small Angry Planet, and I instantly found myself immersed in the universe; before long it feels as though I've known Sidra, Pepper, Blue, Tak and Owl a lot longer than just a few days. Reading one of Chambers' novels already feels like coming home, as cosy and satisfying as a big mug of hot chocolate on a winter's evening (with a sprinkling of cinnamon and dollops of cream and marshmallows.) I'm pleased to know that Ms Chambers is writing a third book in the series, again, not a direct sequel, but set in a different part of the galaxy. I will be eagerly watching this space. 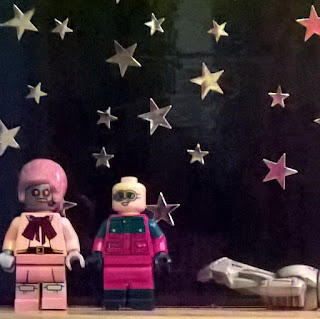