It can be a risky thing to return to a book series you loved a decade ago. Time and distance can change your perspective; sometimes it can give you an added appreciation for things you didn't spot before, but also there is the danger of disappointment, disillusionment. I was a different person ten years ago, when I first discovered Robin Hobb's fantasy epic, beginning with Assassin's Apprentice. It was my "last summer" between finishing university and taking the first steps into the wider world. I found the Farseer Trilogy in the Kingston borough libraries, and was instantly captured by the narrator's voice. From the first page, I could envision the writer, a world-weary scribe in an untidy stone room, scratching his memoirs onto parchment by flickering torch- or lamplight. That summer, I was swept away into a land of political intrigue and half-comprehended magic in a diminished world whose glory days have faded into shadowy myth. And during the weeks while I was engrossed in Hobb's universe, I discovered that by coincidence, three of my friends were at a similar point in the series. We would meet up as an informal bookclub, with cheese and wine on the seafront, and exchange thoughts, theories and hints about what we had read and what was to come. I raced through those books that summer, not only the Farseer chronicles, but the Liveship Traders and Tawny Man set in the same universe. With the publication of a new trilogy, Fitz and the Fool, I returned to the Realm of the Elderlings to refresh my memory of the story so far. It's been a while since I was really into the sword-and-sorcery genre (Terry Pratchett excepted, if he counts) and now science fiction is more my cup of tea. But I was fond of Hobb's characters, and want to see how their tale concludes. 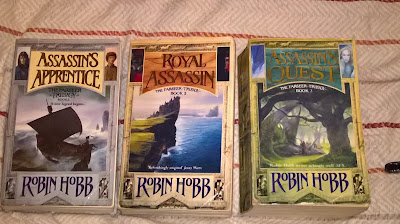 FitzChivalry Farseer is a royal embarrassment. The illegitimate only child of the heir to the Six Duchies throne, he spends his youth hidden and despised, working variously in the castle stables, as page to his father's widow, and learning the arts of the royal apprentice, the shadowy figure Chade. In his lowly position in the royal household, Fitz sees everything, and there is a lot to see, for it is a turbulent time for the Six Duchies. The country is under siege from outside forces, and threatened by treachery from within. The only hope seems to lie in a desperate quest to dangerous territories. But what has this to do with Fitz? And what is the meaning of the cryptic prophecies by the King's Fool?

Superficially, The Farseer Trilogy, and its sequels, is cut from the same cloth as many other fantasy novels, its setting resembling a medieval society, with kings and queens, tradesmen and peasants, with taverns aplenty. Fantastical elements are quite light on the ground. Magic, called "The Skill" is a trait that runs through the bloodline of the Farseers, the ruling family, but its rules and workings are mostly forgotten, passed on by word of mouth and preserved in scraps of scrolls buried deep in the archives. The Skill is a mixed blessing, powerful but addictive to its user and potentially deadly. There are also other, earthier magics, most notably "The Wit" - the ability to bond with an animal companion, a privilege granted to few and viewed with hostility. Fitz is gifted - or cursed - with both Wit and Skill.

The series is fairly slow-paced, taking time to introduce the reader to a rounded cast of characters: Burrich, the stablemaster tasked with Fitz's upbringing and training, Chade, the cantankerous, scarred spy and assassin. The aging King Shrewd, noble Prince Verity and cruel, foppish Prince Regal. Patience and Lacey, Molly Chandler, Nighteyes the wolf, and the Fool. Oh, the Fool! That character stole my heart from his very first appearance. The Fool is an enigma, a character of many contradictory identities, each of which are completely real. Frivolous and melancholic, gender-fluid, stoic and vulnerable, brave and so afraid, all these elements come together to create one of the most exasperating but beloved characters of fantasy fiction.Whenever the Fool arrives on the scene, Fitz must prepare for his life to be turned upside-down. Their relationship grows from youthful antagonism, to friendship, to a love story - whether you call it bromance or romance - that is the heart of the entire saga. 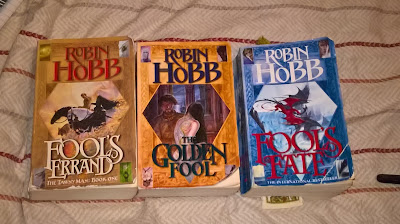 The Farseer Trilogy is followed chronologically by The Liveship Traders, but it takes place in another part of the world, with an entirely new cast - entirely new, but for one character whose familiar identity is revealed gradually. Although I enjoyed that trilogy well enough on my first reading, I decided to skip it on the rereads, as I didn't feel a strong connection to the characters, setting or plot. However, it does give extra background to the events of The Tawny Man, which pick up Fitz's story, fifteen years later.

The Farseer Trilogy and Tawny Man series (and Liveships if you're reading them) are worth savouring and taking time over - and then, when things start to go wrong, you feel the full impact on the characters and the wider world. Robin Hobb makes you fall in love with the characters and then whack you in the emotions, because when things go wrong, putting them right comes at a great cost. Yet Hobb keeps the story from growing too bleak with a light touch of humour, characters who are good company, and a world woven of wonder. Happiness is hard-won, and tempered with sorrow and suffering, so when contentment comes, it is all the sweeter.

However, a new trilogy awaits, and even as I can't wait to reunite myself with Fitz and the Fool, I fear for what else Hobb has in store for them.

Complete saga. Titles in bold are the Fitz/Fool books, which I'm reading this time around.

Ship of Magic
The Mad Ship
Ship of Destiny

Fitz and the Fool