Fitz and the Fool: Book 2 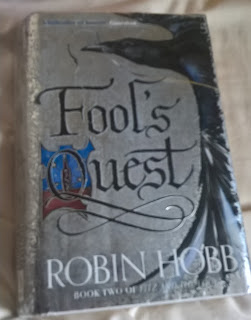 Fool's Assassin was a leisurely, bittersweet and foreboding but mostly cosy exploration of Fitz's new home and life, up until the last few chapters, during which Robin Hobb struck with a two-pronged emotional attack. Fool's Quest picks up just where the previous book left off, at least from one of the plotlines. But it is a while before primary narrator Fitz is even aware of the events that have befallen the other narrator. The tension is high because of the reader's awareness of the anguish in store for Fitz. Hobb has never been kind to her characters; Fitz and the Fool have been through a ridiculous amount of suffering through the course of three trilogies, but now Fitz finds himself caught between the only two people who could come near to testing his loyalty to the other.

After nearly the entire length of a book waiting for Fitz and the Fool's reunion, Hobb reminds us of the old cliche, be careful what you wish for. For the Fool has changed. It is devastating to see this beloved character broken by his experiences in his years apart from Fitz. The Fool is alternately pitiful and aggravating, and trauma has emphasised his worst traits. He has always been stubborn, when it comes to his sense of his role in a higher purpose, but now, he comes across as hard-headed, manipulative, self-absorbed. It's forgivable, given his desperate circumstances, and a natural evolution of the character of the previous books, but still hard to read without wanting to shake some sense into him. And yet, through it all, Fitz and the Fool's relationship is what gives the book its heart. It's far from being the only important relationship; Robin Hobb's strength is that her characters have multi-faceted lives, and despite his quiet existence, Fitz has built up a lifetime's worth of close friends and family, all of whom come together to make him who he is. But there is no love like that between Fitz and the Fool, and Hobb gradually reveals just how powerful that love is.

Amid the frustration with certain characters, and the anxiety for those whose fates are unknown, there are a few moments of joy. Hobb finally presents Fitz with a moment of triumph that has been withheld from him since the beginning of his tale - just so he can be fall the furthest from his highest peak to his greatest despair. And when that happens, watch out world! FitzChivalry Farseer is on the loose, and he is furious!

Fitz has been many people over the course of the series: stable-boy, assassin in the shadows, royal page-boy, outcast, wolf's companion, soldier, husband. Respectability, however, has never come easily to him. He has always had a wild streak, and at this point in his life, when he is expected to be on his politest behaviour, his wildness breaks out like never before. And it is terrifying to behold.

Fool's Quest is relentless, the darkest book of the series so far. In a series starting with Assassin's Apprentice, you can expect dubious morality, grey areas, but really, assassinations were never the focus of any of the stories. And when they were, there was a strict code of professionalism (if that makes it any more palatable.) There was violence, there were battles, there was self-defence or defence of the realm or mercy-killings. But Fool's Quest is the start of a revenge narrative, and that doesn't sit well with me. From early on, Fitz was taught that his job was political, not personal, but now he's thrown all that to the winds. And worst of all, I can feel the narrative nudging me to cheer him on as he sets off on his murderous rampage, because they deserve it. It is an uneasy situation to find oneself in. Still, Hobb has taken us thus far, and I trust her storytelling enough to be sure that the final volume, Assassin's Fate, will be much more than an epic bloodbath. It'll be messy. It'll be morally complex. Fitz will make some terrible decisions. There will be dragons, and there will be tears.
Posted by Katie Edwards at 10:30