Fitz and the Fool: Book 1

Note: you really need to have read The Farseer and Tawny Man trilogies to get the full appreciation of this one. 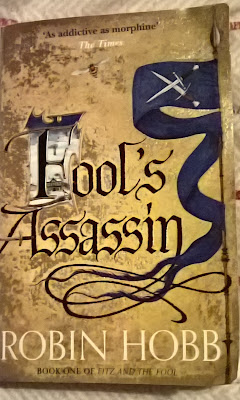 Many years have passed since the events of the Tawny Man trilogy. FitzChivalry Farseer has left behind his former existence, and settled down to a happy family life in the country, living as Holder Tom Badgerlock of the Withywoods Estate. But Withywoods is not the sanctuary Fitz had come to believe. Strange and dangerous things are afoot in the world, even infiltrating Fitz's own home. So often, the trail seems to lead back to the Fool, who Fitz has not seen since they parted at the end of Fool's Fate, but whose absence is a constant weight on his mind. Why has the Fool kept his* distance for so long? And what can he want with Fitz now?

After the intrigue, action, might and magic of the previous books, Fool's Assassin has a much more domestic feel to it than Robin Hobb's readers may be used to. The plot is slow-burn, taking place over a decade or more, slowly building up a thorough picture of a quiet life in the country. Fitz still visits his friends and family at Buckkeep castle, but he is no longer a part of the political wrangling. His concerns are of his family and home; his ageing wife, his youngest child, the household staff and difficult guests. Most of the book is setting up events for the action to come: Hobb builds an entire new world for Fitz, with just enough hints from the outside world and his retrospective narration to fill the reader with terror for when everything comes crashing down. It's only a matter of time.

A new point-of-view character is introduced, who allows us to see the same story from different perspectives, and to show us Fitz as others see him. This was less jarring than I'd expected after six books with only one narrative voice; I wasn't instantly sold on the new character, as at first I found them a little too precocious to be true, but they soon won me over. I enjoyed the alternating chapters, and the new voice brought a freshness to the book while fitting in as though they had always been there. Despite lacking much action for the majority of the book, Fool's Assassin is every bit as engrossing as the previous titles, and has forced me to put the rest of my to-read pile on hold until I find a way to extricate myself from this series.

The book's title, Fool's Assassin, brings together the title patterns of the previous two series, and begs the question, why would the Fool require an assassin? It is so out of character for someone who despite all the chaos and devastation he's caused and endured, is at heart a gentle soul. And we don't even meet the Fool in person until about the last tenth of the book, although he has been at the heart of most of the disturbances that have come into Fitz's life. When he does show up, everything goes terribly, horribly wrong. The longed-for reunion is devastating; one reckless action has far-reaching consequences, and the volume closes on a cliffhanger that made me very grateful that I had waited until the whole trilogy had been published before losing myself in Hobb's world again.


* I use the male pronouns to describe the Fool here, as although the character's gender is ambiguous, he presents as male in the Fitz-narrated books.
Posted by Katie Edwards at 22:39