Perfume: The Story of a Murderer - Patrick Süskind 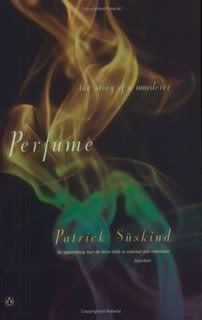 Just these last few weeks, it has seemed as though the whole world wanted me to read Patrick Süskind's Perfume: The Story of a Murderer. After joining in with a customer about the merits of real books over e-readers, his parting words to me were to recommend this book. My friend had been talking about the movie adaptation, and then Ellie mentioned it as a really challenging book in reply to my comment on one of her posts. Lastly, it emerged that my latest acting "discovery" Ben Whishaw had starred in the movie adaptation. And I couldn't see the film without having read the book. Only Shakespeare is exempt from that.

Perfume starts slowly. Really slowly. We are treated to pages and pages of descriptions of smells, every scent in Paris that you might be able to think of. Scent is, of course, a hugely evocative sense, and this forms the basis of the novel, however, I'm not quite sold on how convincingly it can be described with pen and ink. But though slow, these descriptive pages are compelling. It is easy to describe the appearance of things, but there are all the other senses, and Süskind has chosen to focus on one not widely used in literature.

Jean-Baptiste Grenouille, Perfume's protagonist villain, is a very unusual sort of character, even from birth. Those who ought to look after the infant Grenouille are repelled by him in ways they cannot describe, other than that he smells of nothing. Yet his own nose is remarkable, able to identify the subtlest scents, and this one sense occupies his entire mind. He is utterly alien, lacking in human qualities, a psychopathic nose. There is nothing relatable about Grenouille, and yet he is pitiable. Süskind seems to use scent as a metaphor for the soul, and Perfume leads one to ponder on the nature-versus-nurture debate, presenting the uncomfortable idea of a person innately evil. Grenouille moves from place to place, and bad things happen to those he leaves behind. No explicit connection is made, but Grenouille leaves a trail of misfortune behind him, leading back even to his mother, which adds to the sense of menace.

Perfume does not end where you might think it should, and I found the expected denouement to be anticlimactic. When compared with the pages of description earlier in the book, the "finale" is prosaically described, lacking all tension. There is a sense of inevitability of events, with Süskind making no attempts to keep the reader guessing. I came to realise (thanks to my friend's comments) that this is actually incredibly clever, because, after all, this is how Grenouille sees the world. The smells are everything - human actions, life and death, mean nothing to him.

But just when I thought the ending was all wrapped up, the plot takes a horrifying turn by showing not just the evil in Grenouille's character, but the depravity he inspires in his fellow man by the seeming of purity. Perfume is a slow-burning novel, which took its time to grab my attention, but one that lingers, turning out very dark and unsettling indeed.