This review could be considering spoilery, if the above book blurb is all you have to go on. 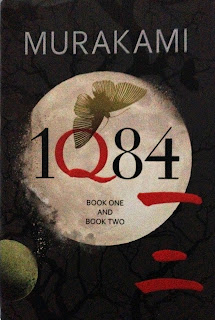 1Q84 follows the lives of two characters, Aomame and Tengo, who are living very different lives in Tokyo. Aomame is a fitness trainer who doubles as an assassin, and who finds her world ever so slightly but significantly wrong after taking a shortcut off the expressway when running late for an "appointment. Tengo is an aspiring writer with a part-time job as a mathematics teacher at a girls' school. When offered the morally dubious task of rewriting a fantasy novel by an enigmatic child prodigy for a literary competition, Tengo finds himself embroiled deeper and deeper in trouble that has little to do with the legal ramifications of fraud. To his dismay, he starts to realise that this extraordinary tale of "Little People," who spin air chrysalises to hatch - essentially - changelings, a secretive cult, and a world with two moons, is not fantasy at all, but autobiography. And the Little People did not want to be written about.

Murakami keeps you guessing about how Tengo and Aomame's stories fit together, as they spend much of the book going about their lives without any kind of interaction or indication that they have ever met. Their worlds don't fit together neatly at first, and in fact I wondered at least once whether they even inhabited the same reality. There are parallels between the two characters' lives, and I would be just on the verge of thinking I knew how they worked when a small detail would seem to throw me off the scent again. The world, or worlds, of 1Q84 shifted and were just a little off-kilter for a while, before Murakami began to answer the questions raised.

The influence of Murakami's "Little People" can be felt throughout the novel, though they are rarely seen and never explained. Are they malevolent fairies or demons? When we do actually meet them, it is in a haunting, surreal scene that unsettles the mind for a long time afterwards. Despite the vagueness of the "Little People," they seemed more vivid and real than any other part of the story - it felt impossible to me that the human mind could make this up. In a New York Times interview, Murakami explained that "The Little People came suddenly. I don’t know who they are. I don’t know what it means. I was a prisoner of the story. I had no choice. They came, and I described it. That is my work." An unsettling thing to read, considering the catastrophic consequences of writing about the Little People in 1Q84. Within the book, Murakami blurred the lines between fiction and reality so well that it even spills into the mind of the reader. 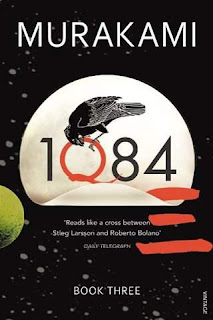 The world of 1Q84 really held my imagination for a long time after I finished reading it, but the story itself was far from flawless. In three volumes, it is too long, with a lot of unnecessary exposition - book 3 introduces a character whose main role is to discover all the things the reader already knows. The characters often don't act or think like real people at all, but are quite clearly doing what they have to in order to fit the plot, rather than the plot evolving naturally from the characters' actions, and the leaps of logic with which characters solve mysteries are ridiculous. Tengo has a memory of Aomame, as a child, looking at the moon, and takes this thought as a message that he needs to look at the moon - and wait! There are two moons! Which automatically means a lot of other things are instantly to be taken as fact, not fiction. Characters somehow arrive at unlikely but true conclusions with very little reason to lead them there, and Aomame "just knows" an impossible thing can only be caused by another, specific, impossible thing.

And, though I can believe in Little People, parallel universes and two moons, I cannot suspend my disbelief enough to be convinced that two people, who interacted precisely once, twenty years ago, in fifth grade, can have a "connection" that means that they are each other's lost love, destined to be together.

All in all, I had a love-hate relationship with 1Q84. It began and ended well, and was full of   extraordinary moments. I felt a thrill every time Aomame noticed something not-quite-right about her new world, and the Little People were among the weirdest things I've read in recent times. But ultimately, the questions were more satisfying to see asked than answered, and the fantasy world was more interesting than the characters or the story itself.
Posted by Katie Edwards at 13:28