Sunday Summary: A storm is coming!

On this grey and windy Sunday afternoon, I have built a nest of pillows and blankets on the spare bed in my room, and here I intend to stay until the predicted storm has passed. Supposedly, this evening, the wind and rain are to be on a par with the infamous storm of 1987, and it is not just the Daily Express that is saying this, so it's wise to take notice for once. Now, I was only a toddler in the autumn of '87, and have no memories of that freak weather, but of course I've seen the pictures and heard the horror stories. My dad received a desperate phone call in the middle of the night from our next-door neighbour, an elderly woman who lived alone, demanding that he remove our fence from her kitchen window. Now, we are British, a nation famed for fussing about the weather - perhaps to compensate for the lack of interesting or extreme weather that actually hits our isles. Still, it was generally considered unreasonable to expect a man to go out in that storm at 3AM in his pyjamas, even for the sake of a fence being blown through a window, which gives me an idea of what to expect tonight. Thankfully today and tomorrow are my days off this week, and I intend to ignore the outside world as best I can. I am stocked up with books, knitting, large cups of tea and coffee, and I have restocked my Tardis-shaped biscuit jar (which is, alas, not bigger on the inside, but big enough.) 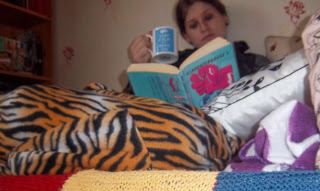 The storm comes as a fitting end to a pretty dreadful week. I spent the first few days troubled with an unusually strong anxiety, of the sort that if I couldn't think of a reason to worry, I would be worrying about what I'd forgotten. This all came to a head on Tuesday night and Wednesday, culminating in a worse-than-usual migraine. I have become resigned to the fact that, although I take two different kinds of daily medication, my migraines are always hovering around me, and I should expect to have either a vague pain, blurry vision, dizziness or dopey disconnectedness most of the time. But Wednesday, exacerbated by the anxiety, thundery weather and lack of sleep, I had to call in sick to work for the first time in over two years.

On Friday, I was greeted by my colleague with: "I hope your head is not too heavy this morning, because we've had a flood." The shop where I work has a flat roof, and seagulls insist on nesting there, which clogged up the drains, and caused the roof to leak in several different places. Thankfully, the leaks missed most of the book stock, but we had to empty some displays and put down buckets in three places to catch the drips, which are not great things to have all over a shop. We called someone out to see to the roof, and we can only hope that it'll do the job tonight. 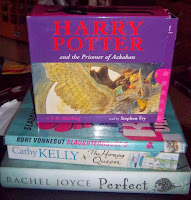 Because of migraines and work, I haven't read a lot this week. I spent most of the week reading Perfect, my ninja book-swap gift from Ellie Warren. It is a simply-written novel, but thought-provoking and emotionally gripping. (A review is forthcoming.) I've also continued with my Harry Potter reread - or rather, I have let Stephen Fry do the reading for me, on my Prisoner of Azkaban audiobook. I'd love to get the whole set on CD - Mr Fry has just the right sort of voice and personality for these quintessentially English stories, and they are very soothing to listen to when ill, or on my CD alarm clock when I wake up. I think he is the closest thing the muggles have to a real-life Dumbledore. Finally, I started to read Slaughterhouse 5, by Kurt Vonnegut. It reminds me in many ways of Catch-22; both are American cult classics dealing with the second world war, and both have a juxtaposition of light tone on grim subject matter (though Catch-22, in my recollection, had no time travel or aliens.) It is a short book, and easier to read than the other Vonnegut book I've read, Cat's Cradle, but all in all, I think it is a book I'll be glad to have read, rather than one I will love reading. Once I've finished that, The Honey Queen by Cathy Kelly looks to be a good contrast, light and fluffy, with a 27-year-old protagonist who opens up a knitting shop. As a young knitter myself, it's good to see a bit of representation in literature.

I've also been carrying on my Trekkie adventures, and last night watched Star Trek IV: The One With The Whales, in which Kirk, Spock et al have to travel back to the 1980s. Hilarity ensues. Again, a review is to follow later in the week.
Posted by Katie Edwards at 15:57