Contains spoilers, if of the "Rosebud Was His Sled" variety.

From the very first moments of the title credits, The Wrath of Khan promises to be the Star Trek motion picture that, um, Star Trek: The Motion Picture never was. The Motion Picture was released a couple of years after a certain other space science fiction film with the word "Star" in the title, (and many, many terrible copies) and allegedly wanted to remind filmgoers that there was more than one type of science fiction movie, being the 2001: A Space Odyssey of the '70s. The Wrath of Khan is, right from the beginning, much more user-friendly. Its title sequence may evoke the Star Wars-type crowd-pleaser, with its starry screen, and James Horner's combination of the classic series theme tune and a new, jaunty, adventurous and hummable melody, but that's not a terrible thing. Perhaps, by 1982, the bad Star Wars knock-offs had begun to die out somewhat, or perhaps the producers were less concerned about VERY MUCH NOT BEING LIKE STAR WARS, NO SIR. This new score sets the tone for the film, and does not disappoint. 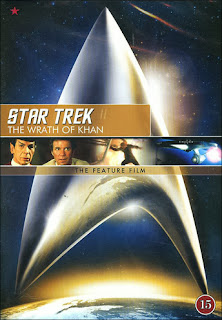 The movie opens by plunging straight into an action scenario, with the crew of the USS Enterprise in the middle of a crisis. A large crisis, with a magnificent entrance hall, carpeting throughout, 24-hour portage and an enormous sign on the roof saying This Is A Large Crisis. (Er, sorry) Captain Kirk is nowhere to be seen; instead, in the chair is a young Vulcan officer named Saavik (subsequently referred to as "Mister" Saavik, though she is about as un-Misterish as you can get.) Saavik is faced with a deadly dilemma. There are explosions, and bodies strewn all across the bridge. (You may wish to observe and take note that in the new Starfleet uniforms, everyone is dressed in red.) But wait! If the melodramatic line-delivery of certain crew members did not strike you as suspicious, at the height of the death and destruction, a door opens, and Admiral James T. Kirk enters. It was all a test: the Kobayashi Maru; a test of an officer's character when faced a no-win scenario. Don't feel cheated, though. It may be a fake-out dramatic opening, but the Kobayashi Maru is something that resonates through the entire movie.

My main criticism of The Motion Picture was the under-use of the series' beloved characters. The Wrath of Khan brings them right back, recognisable but not unchanged. After deciding that the robotic life was not for him, Mr Spock has mellowed. The inner conflict between his human and Vulcan side seems to have been resolved, and he has become more relaxed and likeable. We see him express concern for his captain's wellbeing, and speaking frankly and unsentimentally about the importance of their friendship. He even gives Kirk a birthday present: a beautiful copy of Charles Dickens' A Tale of Two Cities. And though he and Dr. "Bones" McCoy still have their heated arguments, the edge of cruelty that so often came into their rivalry of head and heart before, has gone.

Captain - sorry, Admiral - Kirk, too, has changed. It is his birthday, and it is making him feel gloomy - perhaps one of the Big Ones, probably fifty. Also, he has apparently had a bad perm. Still, it takes very little in the way of plot manoeuvres before he has once more commandeered his beloved Enterprise, full of new recruits, and is heading off into an epic adventure. Soon, he is reunited with two people from his past: old flame Carol Marcus (plus son who also has very, very curly hair. Hmmm...) and Kirk's old enemy and rival to the title of Largest Ham In The Galaxy: Khan Noonian Singh. Or, as he's better known:

With the arrival of Khan, Star Trek gets much darker than it has been before. Sure, the series has never been short of death, torture, betrayal and other perils, but in the series, you always knew it was going to be all right in the end. As a viewer, you never really feared for the characters' lives. James Kirk acknowledges this himself, when he admits that when he took the Kobayashi Maru test, he cheated, because he doesn't believe in a no-win scenario. "I haven't faced death," he admits, at last. "I've cheated death. I've tricked my way out of death and patted myself on the back for my ingenuity." We may joke about the fates of the expendable redshirts, and though Kirk may have suffered agonising guilt and grief at their loss, to a certain extent it's all been part of the day's work. It's fairly standard, family-friendly sort of violence. The Wrath of Khan shows a more horrifying brutality, with the gruesome use of Ceti Eels as a means of mind control, and the carnage found aboard the space station that the Enterprise did not get to until Khan had been there first. Khan, though often deliciously melodramatic, is a formidable foe, obsessed by his hatred, in a plot heavily influenced by Moby-Dick. (A book I have never read, nor particularly wanted to, but one I ought to educate myself on so that I can understand references to it in other works.)

But, for all that, The Wrath of Khan is an epic swashbuckler of a space movie, regaining the element of fun and adventure that was, if not missing in The Motion Picture, secondary to being Serious Science Fiction That We Must Take Seriously. There are battles and revenge and double-crossing, and more explosions, and action, action, action! Then Scotty has to race against time to fix the warp drive down in engineering. But, you know Scotty! He can do it! Give him four minutes to do something that requires an hour, and he'll bodge it somehow.

Chances are, you know the answer to that one. Even before I watched Star Trek, I knew how the Enterprise would be saved, and at what cost. But that did not stop the ending from being any more heartbreaking. The moment at which I saw the look of understanding and decision cross Spock's face, I flashed back to another moment in fiction. I remembered that horrified dawning realisation of what a very different character was planning, the very first time I read... now which book was it Spock bought Kirk for his birthday?

Now, William Shatner has certainly earned his reputation for overacting, which perhaps makes Kirk's reaction to Spock's sacrifice all the more devastating. Even being prepared, even knowing that the next film is called The Search for Spock, does not protect the viewer's heart from being ripped out by the friends' farewell, unable to reach each other, divided by a pane of glass. And Kirk's utter brokenness at being unable to do anything for his friend would bring a Vulcan to tears. (See Saavik in the funeral scene.)

The film does not let up in the aftermath to the famous death scene. First, witness Kirk trying not to break down as he delivers Spock's eulogy. As if that was not upsetting enough, Scotty gets out the bagpipes to send Spock off! Kirk briefly interrupted my grieving process by quoting Sydney Carton's last lines in A Tale of Two Cities - and getting the wording wrong, which caused my brain to itch. But I had barely enough time to compose myself before the famous "Space, the final frontier" voice-over begins, and it's Leonard Nimoy's voice! WHY WOULD YOU DO THAT?

Thankfully, I know that the story is not over for everyone's favourite "pointy-eared hobgoblin," but at the time, when The Wrath of Khan could have marked the end of Star Trek, what a downer-ending that would have been. I must think myself fortunate that I have come to Star Trek late in the game, because to leave it on that note must have been unendurable.
Posted by Katie Edwards at 17:00