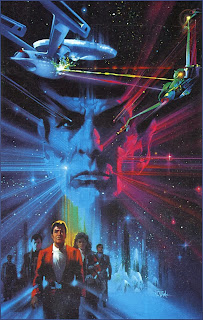 Contains spoilers, both for this movie and The Wrath of Khan

Nobody warned me about this one. I went into The Wrath of Khan with a fairly good idea of the main plot, and with detailed knowledge about the major shock event that concludes the story. Admittedly, that still did not prepare me, but at least I had an idea of what I was letting myself in for. My knowledge of The Search for Spock before watching it was the following: The crew of the Enterprise search for Spock, because he's not as dead as they originally thought. I thought to myself: this film is the one to heal all the emotional trauma suffered in the last one.

Right from the start, The Search for Spock hits you right in the feelings, by showing a nice little montage of "the story so far," opening up the old wounds once more. The Enterprise arrives home from her last mission, not in a triumphant procession, but battered and subdued. To add insult to injury, the ship is to be decommissioned and replaced with a bigger, faster, swankier model. The cadet crew has been reassigned and only a few people remain, all grieving the loss of one of their greatest officers and friends. None is more hurt by Spock's death than James T. Kirk - unless, perhaps, it is the ship's chief medical officer, "Bones" McCoy, whose mind has either snapped or been possessed by Spock himself! The reason for this is given when Kirk meets with Spock's father, who tells him that Vulcans can transfer their souls by mind-meld into another living being, when they know death is coming. Yes, this may be a cheesy cop-out plot device - written because Leonard Nimoy wasn't quite as ready to part with the character as he'd previously thought - but we'll let that slide, this once. As a general rule, I'm not a fan of stories that require a "reset button" to put things back to normal, of sequels that unravel everything that the previous installment accomplished. And The Search for Spock does not, to my mind, achieve the same classic status of its predecessor, which has already been added to my mental list of films which will require regular viewings. However, The Search for Spock has a sincerity about it that turns a clumsy plot device into a decent film.

After its emotional start, I was pleasantly surprised to find myself laughing out loud in one scene. After Kirk requests and is refused permission to go back to find Spock's body, and take it home to Vulcan... he goes anyway, with the help of the bridge crew. Scotty, Sulu and Uhura collaborate to help Kirk steal the enterprise, coming out of the background and being both hilarious and awesome. Their loyalty to their commanding officer is heartwarming, and you see how well beloved Spock is, that the bridge crew risk their lives and careers to save him without a second thought.

Meanwhile, on Genesis, the new planet created in The Wrath of Khan, Kirk's son David, and Vulcan officer Saavik, investigate an unknown lifeform, and find that Spock's body has regenerated into that of a child: alive, but empty, and rapidly aging. It is not long before the Spocklet is all grown up and suffering from Ponn Farr (um... this is to do with Vulcan biology...the biology of Vulcans) but fortunately there is a nice Vulcan lady conveniently there for him. Cue the most awkward sexy-time ever shown on a 12-rated film.

But all is not well on Genesis. The exciting new technology developed by Kirk's former lover and their son has gone wrong, and the planet is going to blow up! All that wonderful but dangerous power at the heart of The Wrath of Khan has revealed itself to be just dangerous.

Just as the Enterprise with her five-man crew arrives, they are faced with another danger: the Klingons. This proud warrior race doesn care that the Genesis technology doesn't work; all they see is a weapon, and they don't care what they destroy to get their hands on it. We've met Klingons before (even if their appearance has changed somewhat since the original series) but don't let that fool you into a false sense of security. This lot, particularly Commander Kruge (played by Christopher Lloyd) are not to be trifled with. Kruge may appear to be an entertainingly dramatic villain of the week, but all that changes when he gives the order to execute one of the three people held captive on Genesis: Saavik, the young Spockless Spock, or Kirk's son David. The tension is high. Surely, he wouldn't really do it?

And then David flings himself at the Klingon, interrupting the planned execution. For a moment, I let out my breath... but too soon.

NO! We'd hardly got to know David well enough to grow attached to him, but isn't Kirk broken enough by the loss of his best friend? How much more pain can one man endure? And then, while we're still reeling from this shock, the Klingons command the surrender of the Enterprise. Kirk and the crew start speaking instructions into the ship's computer. I recognised the sequence from a third season episode, and started shouting at the TV in horror. No! You can't do this. And I'll admit to it: I shed more tears at this point than at the death of Spock in the last film. I'd known Spock would die, and I also knew that he would return. But no one had warned me of this. For the code Kirk, Scotty and Chekov activated before beaming down to Genesis was the Enterprise's self-destruct sequence. And this time, they weren't bluffing.

To give the effects team their due, the Enterprise goes up with an impressive bang, a death scene worthy of a spaceship that has been as much a character in the series as any of her crew (and more than most.) It was as awesome and devastating as the finale of the V for Vendetta adaptation.

It's probably not much of a spoiler here to reveal that they do manage to resurrect Spock, whose absence has been felt throughout the film. Before they arrive back on Vulcan, there is a touching scene where Dr McCoy, alone with the empty body of his old colleague, confesses: "I'm gonna tell you something that I never thought I'd hear myself say. It seems I've missed you, and I don't know if I could stand to lose you again." They may spend all their time together arguing, but in some ways Spock and McCoy represent two halves of a whole, the head and the heart, emotions and logic. After all they've been through together, there is a deep affection between the two men that goes far beyond their external differences. When warned that the ritual to get Spock's Spock-ness out of McCoy's head and back into Spock's could be dangerous, McCoy doesn't hesitate. "I choose the danger!" At least this time he has warning and a chance to back out, should he so choose. Last time they were on Vulcan, in season 2's "Amok Time," Kirk agreed to fight Spock, before being told, "Oh, by the way, this fight is to the death!" (Needless to say, neither died that time.)

Dangerous it may be, but though you can't take anything for granted in the new, higher-stakes version of Star Trek, after a lot of Vulcan ritual and ceremony and holding of breath from all watching, of course McCoy and Spock come out unharmed, though Spock looks confused and almost shy walking among all these half-familiar people watching him intently. Not an enviable position, I think, when he's been mostly-dead for so long. It is when he starts speaking to Kirk, that his memories start to return, in fragments. "Jim," he says at last. "Your name is Jim." Not Captain, or Admiral, simply Jim. First and foremost his friend. And with that friendship reestablished, we know that despite all that has happened up to this point, it's going to be all right.
Posted by Katie Edwards at 18:00