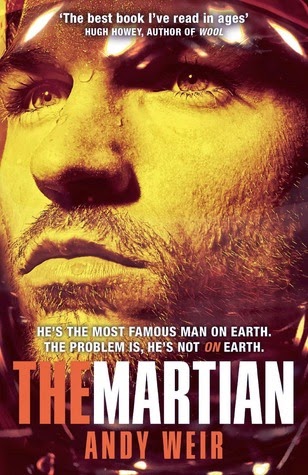 
If an astronaut was accidentally left behind on Mars, could he possibly survive long enough to be rescued? In The Martian, Andy Weir sets out to answer that question in an intelligent, brilliantly-researched and believable way.

This is my food supply. All natural, organic, Martian-grown potatoes. Don't hear that every day, do you?

It took me quite a while to get into The Martian at first. Most of the story is told in astronaut Mark Watney's log, with step-by-step details of: "Here's what I'm going and this is how it works." I'm not very scientifically-minded, so I had to read some passages through a couple of times to understand at least the gist of them, and Weir doesn't spell out the definition of every unfamiliar word: either we know what "Hab," "sol" and "EVA" mean, or we figure it out from context. In the first log entries, I found the mixture of scientific detail and silly humour jarring. But then, of course the humour would feel forced. The man's just been left for dead on Mars, and he's trying to make the best of things. Joking is perhaps not the natural response to this unique situation, but it's a survival mechanism.

But just because this was a slow read, doesn't mean I didn't enjoy it. Spending more time with a book and putting more effort into reading it can be rewarding, and ultimately I think The Martian is the best book I've read this year so far.

It didn't take me very long to appreciate Watney's character: a likable, unflappable and determined guy with a goofy sense of humour. He had to be. Personality is a crucial part of space travel, because if you're stuck in a tin can with just a few people for months on end, you have to not want to kill each other. Also, Watney's resourceful and logical nature in the face of almost certain death makes him a very realistic astronaut. Yes, if surviving alone on Mars for over a year is possible, this man could do it.

"I wonder what he's thinking now."

The pace of the story picked up when the narrative switched between Watney's log and NASA discovering his survival and attempting to bring him home. From Earth, we get a broader perspective of what Watney has to deal with, and the efforts put into bringing him home, but there is also an added tension when satellite images reveal obstacles that Watney is unaware of. I grew to dread the switch from first person to third, especially on Mars, because the omniscient narrator was about to tell the reader something that Watney did not know - usually disaster.

Phobos is the god of fear, and I'm letting it be my guide. Not a good sign.

The Martian is a rollercoaster ride (or rover ride, perhaps) of victorious success and catastrophic setbacks, and each obstacle asks the same question anew: how can Watney possibly survive this? I found myself sitting bolt upright, glued to the page and shouting at the book. Watney's survival is never assured, even in the final few pages. The Martian gave me a real adrenaline rush, if a non-traditional one. It is also utterly heartwarming the huge efforts and expense put in to save one man's life, how the entire world comes together to attempt to bring Watney home, refusing to give up while the tiniest bit of hope remains.