The Girl with all the Gifts - M. R. Carey 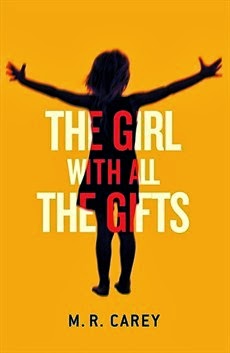 Melanie is a very unusual child. The only home she's ever known is a military base, where she is taken to her classrooms each day strapped into a wheelchair, and returned to her cell each evening. She is bright and inquisitive, but little does she know that she is being brought up for a particular purpose.

It is clear from the very start that The Girl With All The Gifts is not set in the world we know; though recognisable with mentions of London and other towns, unfamiliar names such as Beacon and Region 6 place it into a dystopia setting before we see outside Melanie's daily routine. It is implied that Melanie and her classmates may not be exactly human, and they are feared by the adults around them, but the novel is slow to reveal exactly what has happened to the world and its people. (Unfortunately, the review blurbs on the cover give a little too much away with their comparisons to other series.) The first act was my favourite part of the story, with its small pieces of information hidden in Melanie's everyday life asking more questions with each one answered.

But this new version of normality does not last long. Disaster strikes, and the second act shows a small group of survivors on the run in a post-apocalyptic England: Sergeant Parks and Private Kieran Gallagher, Dr Caroline Caldwell, a research scientist, and Miss Helen Justineau, former teacher to the strange children. And of course, at the group's heart, feared by some, the hope of others, is Melanie.

The two women, Miss Justineau and Dr Caldwell are portrayed in sharp contrast with each other. Miss Justineau is kind-hearted and idealistic, while Dr Caldwell's approach is cold. Her task is important for the human race's survival, and she is prepared to take any action for the greater good, no matter how morally repugnant. At first, when seen through the infatuated Melanie's eyes, Miss Justineau is the heroine, while Dr Caldwell fills the role of villain, but The Girl with all the Gifts does not show a clear black-and-white morality. Miss Justineau is certainly more sympathetic throughout, yet when the fate of humanity is at stake, I came to understand, if not approve, Dr Caldwell's approach as well. Her research gives the familiar narrative a scientific twist, making this book stand out from the rest of the genre.

Greek mythology recurs throughout the novel, in particular, Melanie's favourite tale about Pandora's Box. "The girl with all the gifts" is a direct translation of Pandora's name, and its relevance is revealed in a shocking plot twist at the end which left me completely taken aback, stunned and perhaps even feeling a little betrayed, but I quickly realised it was the perfect ending for this story.
Posted by Katie Edwards at 14:28