I first encountered Charlotte Bronte as a pre-teen, when for some reason or other I watched the Lowood scenes in rehearsal at the local theatre. Being at the time fascinated with boarding school stories, the play encouraged me to try out the novel, but it was only on my fourth attempt when I was about fourteen that I actually read past Jane's childhood and onto the end. This novel has been described as an essential part of any girl's journey to womanhood, but little is known about Charlotte Bronte's other works. As part of the Bronte Sisters challenge, I decided to read Villette, a novel I knew little about other than it was supposed to be Charlotte's best work. 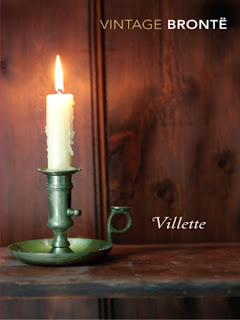 The novel follows the fortunes of Lucy Snowe, a young woman with no money and no family. What Lucy does have by the bucketload is resilience, strength of character, and courage, possibly to the point of recklessness. A Victorian young lady leaves England for the fictional city of Villette, unaccompanied, with no knowledge of French and no job, friends or relations when she gets there (as far as she knows.) Is she insane? Nevertheless, she quickly finds herself a position at a private school, first teaching the younger girls, then becoming English teacher for the whole school.

Lucy is a fascinating, but not always likable protagonist. It took me a good part of the book to be able to establish what her character is; she is quiet but forceful, often compared to a shadow. She is secretive even from the reader, more than once knowing more than she lets on until she decides to make a revelation. Lucy takes no nonsense and very sure of her own rightness. Her attitudes can come across as arrogant and judgemental, and she is particularly anti-Catholic which adds to her isolation as the only Protestant in the school.

Despite it being quite a challenging read, I got through Villette quickly. It is full of complex characters: the vain, coquettish Ginevra Fanshawe - who, despite all her faults, one can't quite bring oneself to dislike - sweet, precocious Polly and the devious, underhanded headmistress Madame Beck. There are two potential love interests in Lucy's life. Dr John, AKA Graham Bretton, son of Lucy's godmother, is the more conventional romantic hero: handsome, charming, friendly and generally decent. His relationship with his mother is heartwarming and amusing, full of good-natured banter. The other is M. Paul Emmanuel, a far more complex character: quick-tempered, passionate, opinionated and frequently rude, but he is full of compassion for the poor, the lowly, the underdog. He and Lucy clash frequently, but she is his equal and won't let him walk over her. He is a good character, yet I found his rudeness quite shocking, especially when I tried to imagine his modern-day equivalent. If he sees Lucy talking to another man, or dressing prettily - read, in a pale pink dress, rather than grey - he calls her all sorts of names, flirt, coquette, vain - Lucy Snowe, one of the most puritanical characters in literature! Imagine how well that would go down in real life, today. It would be considered abusive rather than eccentric foreign outspokenness, surely?

The book is quite hard-going, not least because there are large portions of untranslated French dialogue. I studied the language until I was 18, so I could follow most of it, but it might be better to read a Penguin or Oxford World Classics edition, as these tend to have footnotes or endnotes. It is a somewhat melancholy book, a tale of loneliness, disappointment and hope, and Victorian repression. Charlotte Bronte vividly describes the workings of a mind under attack from depression, of the physical pain from emotional turmoil, and the scenes in which Lucy ventures out at night after being drugged with opiates take on a surreal, fairylike tone, in which which her senses are intensified until everything seems brighter and more real than day-to-day life. Quite apart from subplot about a local ghost story that seems to fit better into an Ann Radcliffe romance, the narration is filled with the borderline-gothic atmosphere that is characteristic of Jane Eyre and Wuthering Heights. Take this scene in which Lucy reflects upon a former unrequited love:

"Was this feeling dead? I do not know, but it was buried. Sometimes I thought the tomb unquiet, and dreamed strangely of disturbed earth, and of hair, still golden and living, obtruded through coffin-chinks."

Villette's ending is ambiguous and comes upon the reader suddenly and hard. Once more, Lucy Snowe conceals the full story from the reader, leaving it open to interpretation whether it she has her happy-ever-after or not. I've a pretty good idea which is the true ending, but either way, it seems quite a let-down to have followed this character from childhood, through 650 pages of hardship, happiness, despair and hard-earned reward, only to have this ending withheld, and wrapped up in a handful of sentences. Yet, it seems a remarkably modern conclusion, and not actually out of place in this clever, thoughtful piece of literature. If Jane Eyre has been helping girls to come of age, Villette is its sadder, wiser and more mature sister.
Posted by Katie Edwards at 20:24