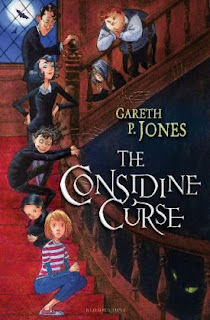 I don't often buy books on impulse, and I rarely buy books from the 9-12 age group, but in Waterstone's the other day I made an exception for The Considine Curse. The story of a "very normal" Australian teenager who goes to visit her strange cousins in England after the death of their grandmother, it looked like a cross between the Addams family and the Lemony Snicket books. Mariel's cousins are very close, many of them hostile to outsiders, and although they share the same grandmother, they don't consider Mariel to be one of them. Mariel's mother didn't even tell her she had any family, and as she gets to know them, Mariel can see why! Only now her mother wants to take her away from her home, school and friends. Mariel does not approve.

The Considine cousins are certainly a strange bunch, each with their own characteristics. Lily and Amelia are strange but seem friendly enough, but Oberon is threatening, and eight-year-old Elspeth is one of the creepiest children I've come across in fiction, oozing malevolence and speaking only in sinister rhyme, hinting at a terrible fate in store for Mariel. I guessed at the family's secret early on, but this did not spoil the story for me, although one piece of foreshadowing came across as too heavy-handed and unnecessary. The story is a great mix of a page-turning family mystery and a gothic undercurrent that gets darker and more dangerous as the story goes along.

I was quite shocked at the level of bloodthirstiness for a book aimed at pre-teens, but what I found more disturbing was the ending. I think it was supposed to be a happy ending, but it was rather bittersweet and a somewhat morally dubious. Although as an adult I don't mind stories with "untidy" conclusions, if I had read this book when I was ten or eleven, I would have been concerned about the decisions Mariel took. Her story may have ended pretty well, but I would have been - and was, a bit - troubled about the wider-reaching consequences for the family and community. Perhaps I think too much. Still, The Considine Curse is an enjoyable, intriguing and creepy read.