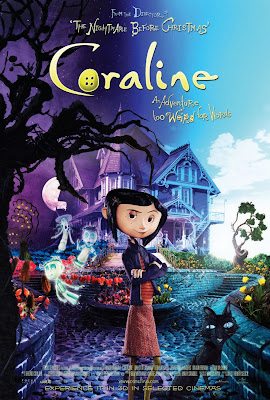 I've been thinking about it, and I really can't come to a conclusion on how strange Coraline really is.

Given that this film is based upon a book by Neil Gaiman, I would be inclined towards the "twisted" explanation, and yet somehow this manages to be a children's film. And it starts off as a fairly standard kids' fantasy in the tradition of Alice in Wonderland or the Chronicles of Narnia. A little girl moves to a new home with her parents, is bored, goes exploring, and finds a little door into another world; a world like and yet not quite like the one she calls home.

In this world, her parents have nothing better to do than to shower Coraline with the love and attention she craves. In this world, Mother cooks up a feast for every meal, and Father has planted a garden just for Coraline. And they like nothing better than playing outside in the rain and the dirt. Their apartment is just like the one in the real world, but nicer.

Just try not to worry about the buttons...

Coraline draws on the grand old tradition of fairy tales - not the Disneyfied version that we're used to these days, but the darker, stranger originals. I noticed plenty of fairyland motifs throughout the book - the fairy ring of mushrooms, the glass with the hole in it that reveals "Bad things!" "No! Lost things!" (or removes all glamour to show things as they really are.) The first time I watched Coraline I shouted at her "DON'T EAT IT!" when she was at the dinner table with her Other Mother and Other Father, afraid that, like fairy food, it would mean that she would never be able to leave...

Coraline is a stop-motion animation directed by Henry Selick of The Nightmare Before Christmas fame. It's not a style of film I usually watch, but it is perfect for this story, with a rather twisty-looking, surreal style that complements the spooky atmosphere of the tale. (A live-action Coraline would be far too disturbing for a kids' film!) I think if this film had existed when I was small, I would have been terrified by the button-eyed characters before their sinister intentions were even revealed, and as such there's a small part of me that shouts "HOW CAN THIS POSSIBLY BE SUITABLE FOR CHILDREN?!" Yet kids love it. (When my colleague's daughter was nine, she was constantly watching this film or reading the book.) And in fact, Coraline is one of those rare stories written by someone who hasn't forgotten what is the right amount of scary for children. Like the works of Roald Dahl, this is far more disturbing for adults than for children. I believe Gaiman deliberately wrote a story that plays upon the worst adult fears - if you ignore your kids, you could lose them forever! - while children read or watch this as an exciting adventure quest.