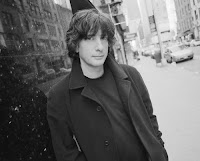 Since becoming a Neil Gaiman fangirl last year and reading my way through his novels and short story collections, it became only a matter of time before I embarked upon a new adventure: the comic books that made his name, The Sandman, now collected in graphic novel format. Aware that I was entering a new, inner-circle of geekdom, but recommended by my friend who went before me, I trundled down to the library to check out volume one: Preludes and Nocturnes.


I soon discovered that graphic novels require a different kind of reading to prose fiction, even illustrated prose. You have to read the pictures (which, they say, are worth a thousand words) at the same time as the words. It takes some training of the eyes, or so I found. I had picked up Preludes and Nocturnes at work, and flicked through it in the stockroom, reading a few pages, but out of context, it didn't make a lot of sense. It takes some time to get really started, introducing different sets of characters, some living ordinary lives, others distinctly extraordinary, who are connected, loosely to each other, or via the main core of the story, by their dreams. When the personification of Dream is removed from the picture, a nightmare scenario results. 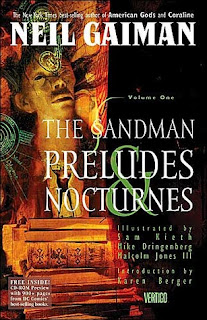 Something that took me by surprise reading this was how different comic books seem to be part of the same world, in ways that fiction isn't. I'm used to one author being in charge of one story-world. But even I, comic book virgin that I was, recognised some of the names that popped up here: John Constantine, Arkham Asylum, and one or two others. To a connoisseur, I'm probably stating the obvious, but this interaction of stories was a new experience for me.

It took me a while to find my feet here, and I had mixed feelings about The Sandman as a story, and the graphic novel as a medium. Neil himself admits that this volume is patchy, as he (and the artists) were themselves trying to work out what The Sandman really is. There is beauty and strangeness and ugliness, and you can tell when different artists have drawn the same characters. The art style is one I have yet to get used to, even after getting into the habit of "reading" the pictures as well as the words. It caused something of a barrier against be being completely drawn into the story, and horror scenes just came across as gruesome and zombieish rather than enhancing a creepy atmosphere.

Yet there is much that shines. The story is fascinating, and even early on, there are moments that leave me breathless with their brilliances. The battle of wits was wonderful, and in the last story of the collection, "The Sound of Her Wings" was the point where Neil felt he had found his voice. I concur. This chapter serves as a poetic, pensive epilogue to the volume, where words, character and sheer Neilishness take a firm hold of the story.

This is where it gets good.