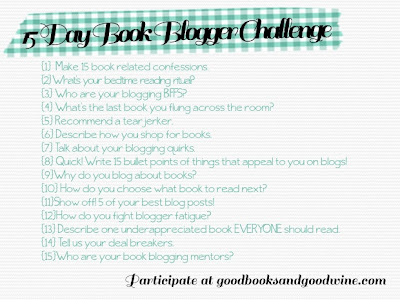 Anna, Ginger and Smash have been very influential when I found myself becoming involved in the book blogging community, in particular as adult readers of YA fiction. They have run some great regular features, discussion posts and memes, and inspired me to think up new ideas for the blog aside from just the book reviews. (I hadn't actually visited Smash Attack Reads in a while: it now appears to be a collaborative blog with not one but FOUR fantastic bloggers.) Meanwhile, Ellie and Hanna have a more informal approach to blogging, with eclectic mixtures of book reviews and personal posts, which have encouraged me to be more relaxed about blogging even if I don't feel inspired to write a structured review. Rants and reading-journal-format posts also make great blogging. And I've only recently started following Laura and Sarah, whose reviews have inspired me to want to take out my credit card and buy ALL the books.
Posted by Katie Edwards at 16:44