As we start the second week of Dana and Jenny's Reading Cram readathon, I find myself still reading the same books as a week ago, perhaps a drawback of having more than one thing on the go at once. Perdido Street Station was never going to be read in a week, but a couple more evenings of undistracted reading should polish off The Explorer Gene and Harry Potter and the Goblet of Fire. Then onto the Christmas classics: The Lion, the Witch and the Wardrobe and A Christmas Carol, which really ought to be read in the next week.

Today I have been finishing off part 5 of Perdido Street Station, in which Isaac and his comrades are preparing an epic showdown against the hypnotic dementor-moths. Judith and I are reading this book together as an informal 2-person book club, and I'll be meeting her from work to discuss the story so far. Then, this evening, a group of us will be going to see The Hobbit: The Desolation of Smaug (which I stubbornly stick to pronouncing "Smorg" even though I've long suspected that the film's pronunciation is actually correct.) 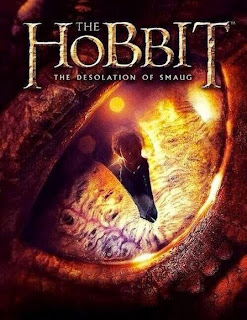 On the whole, I was pretty happy with An Unexpected Journey, but I am approaching part two with a lot more caution and suspicion. The Page Lady, who crocheted 13 beards for her and her friends to wear to the midnight showing of part 1, and who has sound judgement when it comes to Middle-Earth, came away from part 2 very disappointed. This time, I want very much to disagree with her. Other friends have spoken favourably of the film, and I've stayed well away from reviews (even Page Lady's) because I'd prefer not to have my opinion influenced by others. I know my enjoyment of Oz: The Great And Powerful was affected by having read a critical blog post about its portrayal of female characters. I'm wary of The Hobbit part two because the promotional material has been full of Peter Jackson and his people justifying changes they've made from the book, until I wonder whether I'll even recognise the film as The Hobbit. I'm particularly nervous of how they will present the Elves. The trailer seems to be playing up the warrior aspect, which certainly comes into force at the end of the story in the Battle of Five Armies, but I'd like to see more of the fey, otherworldly creatures that we meet in the book, to contrast with the all-wise and powerful beings of Lord of the Rings.

11PM: Met Judith from work, only to find that she had to stay on an extra half hour because her bus had made her very late starting her shift. So I used that time to take a long-way-round pootle to the post office to pick up a parcel which hadn't been delivered on Saturday because no one was in. It turned out to be a shiny new hardback copy of Rainbow Rowell's Fangirl, which I've been wanting to read since I first heard about it. A teenager obsessed with a particular book, off to university and trying to juggle fanfiction and the real world? Now why does that sound familiar? I think this book was a present from Ellie - it was sent straight from the Book Depository, and was the only surprise book parcel I was expecting, so thank you Ellie. (And if it was not Ellie who sent it, please own up now so I can thank you.) I think Fangirl will be excellent Christmas afternoon reading, when we're all stuffed and sleepy.

Judi and I spent the afternoon mooching around in the living room, eating homemade mince pies, cakes and cheese, and generally feeling Christmassy, discussing our thoughts on Perdido Street Station, which I can't really share because they are too spoilery. Suffice to say, one of the more interesting plotlines appears to have come to an abrupt end, rather disappointingly, and the world of New Crobuzon is not a very nice world at all.

We went to the 7PM showing of The Hobbit: The Desolation of Smaug, which I will review properly before very long. I was probably right to approach the film with caution and not expect my vision of the book to be beamed onto the big screen. Yes, it was padded, yes it probably could benefit with a generous trim, and yes, there was an unsurprising added subplot that I could not be havin' with at all, but all in all I enjoyed the film a lot, and would gladly go to see it again.

4PM: The last day of my nice long weekend has shaped up to be a very lazy one, grey and drizzly and generally rather sleepy. I spent most of the morning writing up my thoughts on the second Hobbit movie for the blog: in short, though the film was undoubtedly the weakest in the series so far, I enjoyed it for the most part. This afternoon I've actually finished a book - the first book to be finished during this readathon or even this month. I sat myself down to read the final installment in The Explorer Gene, reading about Bertrand Piccard, the third in a direct line to boldly go where no man has gone before, in his case around the world non-stop in a balloon.

9PM: So I spend the first eight days reading the same books and then on day nine I finish two of them! Finally it feels like I'm getting somewhere on this readathon. I've finished my reread of Harry Potter and the Goblet of Fire, and because of the three-year cliffhanger between the books being published, it feels like a good place to stop for now while I pick up some festive reading. Goblet of Fire ends when it's just started getting very dark and very interesting (boy, how we picked over those last few chapters in sixth form looking for clues to what was to happen next!) I think I'll put this series aside till I've done some festive reading, though. Order of the Phoenix is a big book and one which I enjoy the least; it always feels like an effort to go through the oppressive "no one believes Harry and Umbridge is highly unpleasant" plot.

Back at work tomorrow after a long weekend. These evenings are worse than when I've only had one day off at a time, as I've snapped out of work-mode fully and have no real desire to get back into it. Especially with just one more week till Christmas. Come on, Edwards, you can do it!

Just read on the internet that a film version of the Sandman comics is set to be made. I wonder how they'll condense that sprawling epic into a couple of hours screen time! I have one request regarding this: Cumberbatch for Dream, please! (I know that he is the fan choice for pretty much everything that Tom Hiddleston isn't, but I can't imagine anyone better suited to the role. It's his voice, or one very like it, that I heard in those white-on-black speech bubbles, and he's worked on a Gaiman adaptation before, as the Angel Islington of Neverwhere. Please, universe. Do this for me!

What I've read today: The Explorer Gene
Harry Potter and the Goblet of Fire
Number of pages read today: 238
Running total: 1035
pages
Books finished: Two: The Explorer Gene by Tom Cheshire
Harry Potter and the Goblet of Fire by J. K. Rowling
Number of mince pies consumed during readathon: 9
Quote of the day: "Extreme adventure, the real one, is not for showing off in public, nor is it an escape from reality, or a wish, whether conscious or not, to get high on adrenaline... It is a life-sized mirror and the opportunity to discover some new inner resources. Adventure is the breaking point when we realise that we can no longer be satisfied with reproducing automatically what we learned, that this won't do anymore." - Bertrand Piccard
My life outside books: A nice lazy day, end of a long weekend.