Hello all, hope you're well. I've been back at work this week and it's been ridiculous. Two weeks into October, we are well and truly into the Retail Christmas season. I'm working full time this month to cover various other people's shifts, and my days off aren't even the same every week. I've worked four days, have today off, and have another four days starting tomorrow. I'm physically tired from moving so many heavy books and boxes around, so today is pretty much a duvet day.

This week I have been: 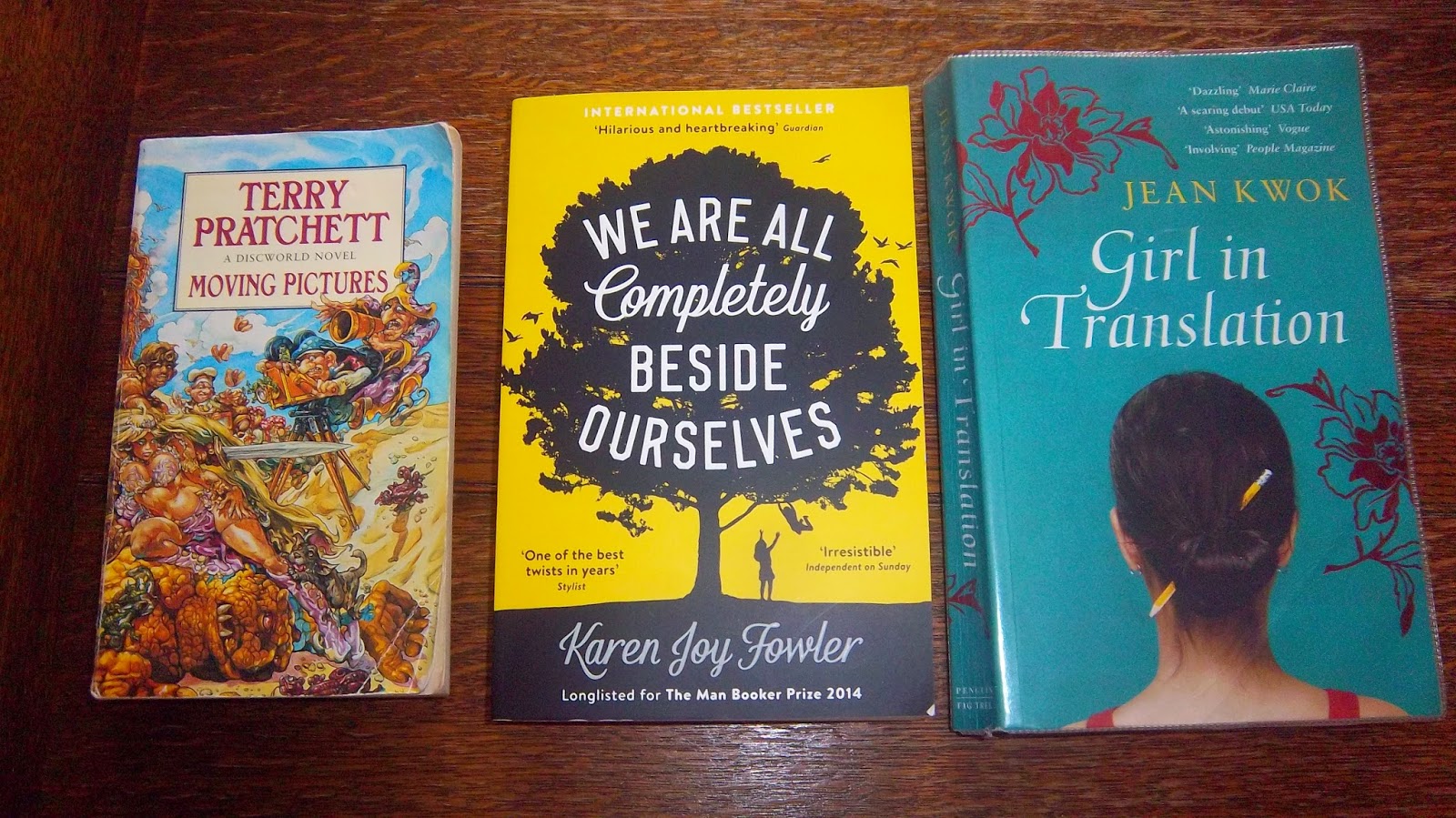 Moving Pictures by Terry Pratchett. I'm still working through all the Discworld books I haven't read before, and hope to finish the series by the end of the year.

We Are All Completely Beside Ourselves by Karen Joy Fowler. This was my birthday present from Ellie, a moving and surprising story about the effects of an unconventional upbringing on a family. It was very different from what I had expected - another book following this year's trend of excellent books with bright yellow covers.

Girl In Translation by Jean Kwok: the story of a little girl and her mother who move from Hong Kong to America, to find life there very different from the life they had envisioned. A beautiful, often sad but ultimately hopeful story about the triumph of the human spirit over adversity. Kwok evokes well the confusion of being young in a strange culture, with an incomplete understanding of the language and culture.

Moby-Dick by Herman Melville. I have to confess that went back to the library unfinished. I would like to read it at some point, but I've got so many newly-bought and birthday books to read, and I'd much rather get stuck into them. 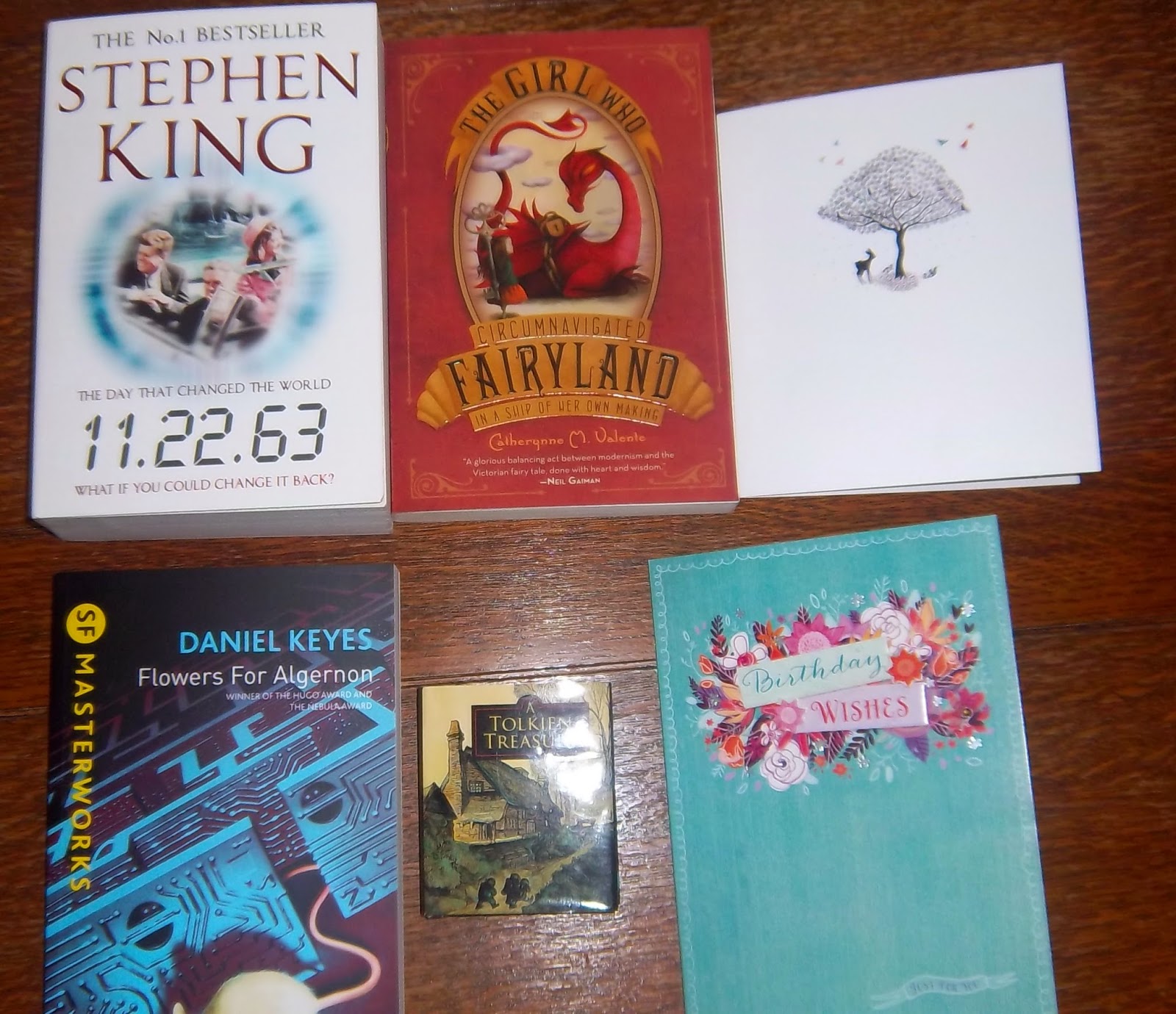 Two more birthday presents arrived this week: books from bloggers Hanna and Charlotte. Charlotte sent me science fiction classic Flowers for Algernon, as well as a little Tolkien treasury full of poetry, art and ponderings about the Lord of the Rings. (This has found a home on my Lord of the Rings feature shelf - yes, I have a shelf of my bookcase devoted to Tolkien!) Meanwhile, Hanna sent me Stephen King's 11.22.63 which I, along with probably all of the UK Stephen King readers, keep writing the wrong way round, and which I have been wanting to read ever since it first came out. She also sent me The Girl Who Circumnavigated Fairyland In A Ship Of Her Own Making. How can a book with that title be anything but excellent? Thank you both so much, I'm thrilled by all of these books. My only problem is: which do I read first?

Heroes, season one, which I have been buddy-watching with my sister (even though she lives in London.) This never interested me when it was on TV - I couldn't be having with those superheroes. And then The Avengers happened, and I realised that those kinds of stories appealed to me after all. So far, Heroes is fairly familiar territory to anyone who watched X-Men or Agents of SHIELD, but with a greater focus on the effects of developing superpowers on ordinary people's ordinary lives. I'm only a few episodes in so far but I'm already getting attached to the characters. Hiro Nakamura is my favourite character so far - he is so unashamedly geeky! His excitement is so endearing.

Some friends had a tabletop gaming evening last night. The previous week, I was introduced to Netrunner, which was not very successful due to a poorly two-year-old refusing to go to sleep. Luckily young Sam was fast asleep last night, and we got through a game which I can't remember the name of, but was based on Lovecraft's writings. It is a collaborative game: players versus the monsters. The monsters won.

Not a lot, because the thunderstorm a few nights ago did something - I don't know what - to our wireless router. But since that's been fixed, I've been reading and watching Mark Oshiro reading Wyrd Sisters. With the introduction of Granny Weatherwax, Nanny Ogg and Magrat Garlick, the series becomes a very different thing. This is when it starts to get really good.
Posted by Katie Edwards at 15:56