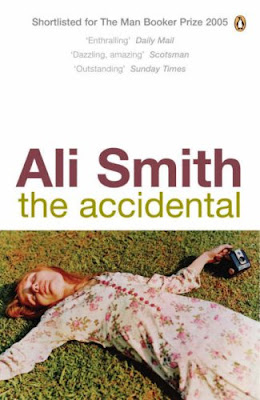 Ali Smith is one of those authors who, until now, I had repeatedly not read. How To Be Both has been on my radar for a while, highly acclaimed and alluring, but somehow a bit intimidating too. And, when I finally bought The Accidental from the Books for Syria table at Waterstone's last week, and read the blurbs for Smith's back list,I recognised the strangely-incomplete titled There But For The as another book I'd picked up many times but never quite brought home with me. Smith has a reputation for being very clever and lyrical, but somewhat experimental in style, which had slightly frightened me for a long time. But this was for a good cause - a charity donation that gets you a free book, right?

The Accidental focuses on the Smart family: two parents and two adolescents, all of whom have their own struggles and unhappinesses. Astrid, aged twelve, is a lonely teenager, trying to make sense of her world through her video camera. Magnus, who is about sixteen or seventeen, is eaten up with guilt after his involvement in an incident at school with tragic consequences. Their stepfather, Michael, is a creepy college professor with a midlife crisis and lots of affairs, while their mother, Eve, feels the weight of unhappiness of her family, her marriage, and her career as a writer.

Into their lives comes Amber, a strange woman who shows up at their house one day. Everyone thinks she's here with someone else, but who is she, really? Each member of the family perceives her differently, either finding what they long for or need in her, or perhaps projecting their wishes onto her. She is the narrator, probably, of the first-person passages interspersed with the Smart family point-of-view chapters, yet we don't really know much about her. She doesn't quite seem real. Some of the characters think she must be an angel, but if so, she is an unstable, maybe even dangerous one. At the end of part one, she starts to give you a few answers - surprisingly early on, I thought - until: "Well?" she said. "Do you believe me?" I didn't think to do otherwise until that point, but the question throws it all into doubt. But that's all the answer you get.

The Accidental is a story about story, structured tidily into three parts: beginning, middle and end. About how stories grow and change in the telling, mutating and shaping the perception of truth. We see this expressed in different ways throughout the novel, for example in Eve's book series called "Genuine Articles," in which she takes real stories from history, but rewrites them to give them happy endings and "what ifs."

The language is lyrical, poetic - one section being made up of actual poetry, in Michael's "middle," the changes in form showing his world and his mind unravelling somewhat as the style turns from conventional sonnets in the Shakespearean rhyme scheme, to a frantic, disjointed style, to words just apparently thrown at a page. For Michael, Amber represents an incorruptible purity, and is the woman immune to his attempts at seduction. And his sense of entitlement can not deal with rejection. He is a repulsive creature.

Ali Smith's narrative contains some stream-of-consciousness, luring you to read on, but also to take your time thinking about her word choices. I found The Accidental engrossing with lots of food for thought, and I'm glad I finally got around to reading it. She's not necessarily a new favourite author, but definitely someone I want to read lots more from in the future.
Posted by Katie Edwards at 17:29