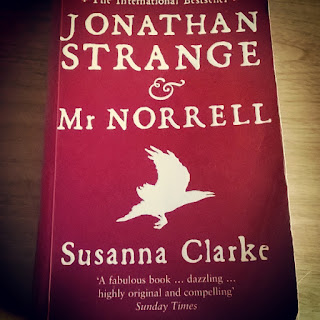 It is England at the beginning of the nineteenth century: the time of King George III, and the Napoleonic Wars. And yet it is not quite England as we know it. For this England is made up of two kingdoms: the north and the south. The King in the North, the Raven King, John Uskglass, was the last practicing magician in the country, but he disappeared three hundred years ago. Since then, English magic has been limited to dusty old men reading dusty old books, studying the theory of magic, but the theory alone. Actual, visible, practical magic is a thing of the past. Or so it seemed, until now...

The story opens with the framing device of a third party - not Norrell, nor Strange, but Mr Segundus, posing the question to the society of magicians: why is magic no longer done in Britain? The following thousand pages proceed to tell us exactly what happens when mortals meddle with magic. The two titular magicians could not be more unlike each other. Gilbert Norrell, the one and only practical magician turned up at the beginning of the book, is a pompous, dull, irritating man, cautious of the powers of magic, and desiring that he should keep the secrets to himself. Meanwhile, Jonathan Strange is outwardly charming, a brilliant apprentice magician, but capricious and reckless.

The story really begins when, against his better judgement, Mr Norrell resurrects a lady from the dead, making a bargain with a shady, David-Bowie-in-Labyrinth-like figure from fairyland known only as the gentleman with the thistle-down hair. Once the fairies get involved, nothing is predictable, and Clarke spins a bewitching tale that draws you into this world like and yet unlike our own, until you are as bewitched as if you too spent half of your life dancing the nights away at the gentleman's kingdom of Lost-hope. Strange and Norrell contrast with one another in almost every aspect of character and approach to magic; one in favour of bringing back magic to English shores in full force, the other wanting only to control it and keep it secure, and by no means to involve the fairies, whose morality, if they have such a thing, is completely alien and unpredictable.

It took me a decade between first buying Jonathan Strange and Mr Norrell as a Christmas present for my dad, and actually getting around to reading it. Even though I suspected it would be right up my street, I found the length a little intimidating, and when I watched the TV adaptation last year, I was the only person in the room not to know the story - a rare event, especially in this genre. Strange and Norrell is absolutely my sort of story, full of dark fantasy and magical story-telling, dangerous fairies, set in a deftly-drawn alternative history and told with dry wit. The narrative reads as though written at the time it was set, and the language and spelling of the regency era serves to draw the reader even further into the world of the novel -  with copious amounts of in-universe footnotes, giving background to the alternative version of history.

Although there were a few chapters near the end (when Strange is travelling in Venice) which seemed less tightly-woven into the plot than the rest, on the whole, the pages flew by easily, and I thoroughly enjoyed spending a week or so in this magical world. Jonathan Strange and Mr Norrell is an indulgent and all-absorbing novel, an excellent comfort read on long winter nights.
Posted by Katie Edwards at 17:12