Sunday Summary: Do It Anyway 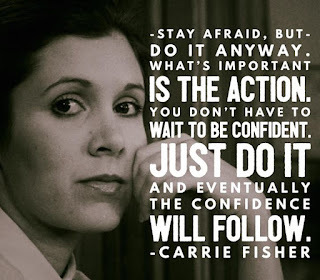 Happy new year to you all. (Is it too late to be saying this now?) I hope you're all not too gloomy about Christmas being all over now and the return to normality - although Christmas isn't really over until the last of the snack food is gone. Fact. Or if you're a fellow retailer, perhaps you're relieved.

I quite like the beginning of a new year. The empty pages in the calendar with their infinite possibility; though I don't really do resolutions, I like to take the time to look over my life and see what has been a success in the last 12 months, and what changes I could make. This year has a massive change on the cards: I've handed in my notice at work, and will be leaving in four weeks' time. There is still a lot I love about my bookshop job, and I'm very proud of what I've achieved there in the last eight years, but I'm afraid of stagnating, and all the signs seem to be pointing towards it being time for me to say goodbye. But I'm leaving without anything certain to go to yet, which is almost as frightening. Financially I'll be OK for a while, as long as I only buy necessities, but of course the sooner I find a new job, the better. (In the spirit of "Do It Anyway," I've promised myself the reward of a trip to visit a friend in Canada if he's still there when I'm back in work.) 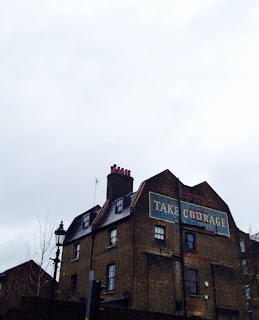 With the dark grey weather and long evenings, it's a good time to get back into my books, and Jessie Burton's The Muse is easing me out of my recent reading slump. I really loved her debut novel The Miniaturist, and The Muse is shaping up to be just as good, although I've reached a perspective-shift and need to adjust to the new characters and setting.

With my change in financial circumstances I'm going to be very strict with my spending and am enforcing a partial book-buying-ban (though I do intend to go to Bex's second London Bookshop Crawl next month, mostly for the social element and with a strict budget.) There are a few books out now or coming soon that I want to buy, such as Juno Dawson's new book Margot and Me, and the short "Spinster Club" book And A Happy New Year by Holly Bourne. But I shall also be making more use of the library and second-hand bookshops this year (as well as continuing the battle with my to-read pile and all the books I want to reread.)

I recently watched Netflix's surprise series The OA, which turned up with little fanfare. I'm not really sure what to make of it. It's the story of a young woman who reappears after going missing seven years previously. But she used to be blind and now she can see! As she struggles to adjust back to living an ordinary life, she meets with a few other people and tells them the story of her strange experiences in captivity. But how reliable is she? I'm not really sure if The OA was a bit good or really, really (but endearingly) bad. Certainly there were some elements that were utterly ridiculous; in particular the "movements" that were supposed to have mystical powers. But as much as I laughed at the weird interpretative dance scenes, I was left pondering over questions of reality and narrative, and thinking about the characters after the credits had finished.

Also there was the return of BBC's Sherlock on New Year's Eve, with another episode tonight and a third next Sunday. I wrote a rave review of the first series of Sherlock all the way back in 2010 when it first aired. I was a huge admirer of Stephen Moffat, one of the series' creators and also head writer of Doctor Who. But Moffat has come under fire a lot in the past few years, and his Doctor Who and Sherlock with it; although I don't agree with a lot of the things I read, I can't help but keep in mind some of the criticism when viewing his work, and I think my enjoyment of the stories has suffered as a result. And the series has never reached the heights of the first episode "A Study in Pink." I think that the rules of TV mean that each story has to be bigger than the last, the stakes higher, the conflict darker, and it has moved away from the source material a bit. Last week's episode was a thriller more than a mystery, and it employed an egregious use of a much-criticised narrative trope that I don't think is likely to be forgiven any time soon. I understand some of the reasons why the writers made the decision that they did, but it's disappointing. A good writer has awareness of the tools of their trade; not just their words, but the character archetypes, tropes, cliches to avoid, common narratives to subvert. And unfortunately in that regard, Moffat and Gatiss are perhaps not quite such great storytellers as I used to believe.

Edited later: Although I still haven't forgiven them for last week's "twist," this week's episode, "The Lying Detective" was pretty epic, with a genuinely creepy villain and some real shockers - some that I'd foreseen in part, others that I think were deliberately written to make you kick yourself for not seeing and exposing even the supposedly savvy viewers' internalised prejudices and assumptions. Okay, Moffat and Gattiss, you win round 2.

One more episode of the season, and although I do enjoy Sherlock over all, I kind of hope this'll be the last series, to leave us wanting more instead of carrying on past its welcome, as too often happens with popular series. Best to go out on top, I think.
Posted by Katie Edwards at 15:55