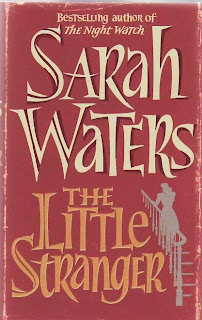 When you read a lot of books, it is inevitable that many of them leave you disappointed. Occasionally, however, a book comes along that is close to perfect. I found that two years ago, unexpectedly, when I reached the end of A Tale of Two Cities. At the beginning of last year, Markus Zusak's The Book Thief left me speechless. And a few weeks ago, I discovered The Little Stranger (which has now been nominated for the Man Booker Prize, and I will be disappointed if it doesn't win.)
The Little Stranger is a ghost story of sorts, set just after the end of the Second World War, in Hundreds Hall, an old house whose family are losing control of it. The Ayres family have the house, but not the money to run it, and strange phenomena start occurring. The narrator is one Doctor Faraday, the son of one of the former maids at Hundreds who becomes friends with the family. As he becomes more intimate with the Ayres family: the widowed Mrs Ayres, her son Roderick and daughter Caroline.
The novel reads as though it were written at the time in which it is set. Waters not only uses the vocabulary of the era, but stylistic conventions. For example certain words are not spelled out, but contain dashes. Similarly, when characters mention a recent scandal, the name is omitted.
The central character in The Little Stranger is not Doctor Faraday, or any one of the Ayres family, but Hundreds Hall itself, which takes its place in a long line of old crumbling houses in the Gothic tradition, from Horace Walpole's Castle of Otranto to Stephen King's Overlook Hotel. The atmosphere of the house begins as one of shabby nostalgia, a sorry memory of grander times. Waters skillfully evolves that atmosphere, through one of intrigue as Roderick starts to think that there is something wrong with the house. At first the signs are petty, seemingly harmless, such as furniture moving, and corresponding marks. These uncanny occurrences become more malevolent and when Dr Faraday notices dark marks all over the walls of Roderick's bedroom, spreading like mildew, like the "infection" Roderick feared. A creeping terror came over me as I read of those marks, which I knew corresponded with something terrible that would happen.
Sarah Waters never fully explains the "ghost," if ghost it is. Doctor Faraday, a man of science, stubbornly resists, in the face of evidence, that there is anything supernatural taking place at Hundreds Hall, and there is no moment of realisation. Traditionally in Gothic fiction, if the narrator is a scientist or a doctor, it is to add veracity to the tale - but Dr Faraday refuses to see what does not fit into his understanding. Waters through other characters suggests identities or explanations - Mrs Faraday believes the ghost of her late daughter Susan to be haunting her old house, and some of the clues seem to point to that, but others make no sense at all. Other characters suggest Roderick to be "haunting" Hundreds, or Caroline's repressed feelings. But Waters never gives an explanation. I started the novel wanting to know the answers, but when I reached the end I realised that a definite answer would be inevitably disappointing, while an open ending leaves the reader to come to their own conclusions, if they want to. Besides, I could not imagine a moment of realisation coming to Faraday - it would not fit with the novel or the character, and would be too tidy. Is "the little stranger" a straightforward ghost? Is it, like Poe's House of Usher, the house and the family, the one inextricable from the other? Is it some force influenced by one, or more, of the characters?
I read an interesting blog article by someone who goes by the name of "The Little Professor"  which suggests that the "Little Stranger" is Faraday himself. This was a possibility I had considered myself on reading the novel. After all, everything starts after Faraday starts spending time at Hundreds, and the idea of living at the Hall and restoring it to its former glory becomes an obsession with him - he becomes engaged to Caroline, but his love for her is unconvincing. It's the house he wants, not her.
Posted by Katie Edwards at 09:42