Doctor Who: The Tenth Doctor:

Spoilers galore, though if you're reading this you're probably up-to-date with Doctor Who up to The End of Time.


I hadn't heard of David Tennant before he was announced as replacing Christopher Ecclestone as the Doctor for the second series of the revamped Doctor Who. My sister filled me in: he played Casanova in a BBC drama series of the same name. I had seen trailers for the show and thought Tennant seemed an... unusual... casting: a scrawny, scruffy-looking young man as the world's greatest lover? I had expected someone a bit more... dashing, especially after having seen the trailer for a film starring the more conventionally good-looking Heath Ledger. However, I had never seen the programme, so could only judge from vague memories of the trailers. 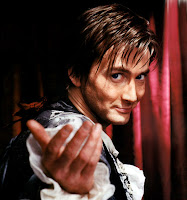 I thought at first that Tennant's Doctor was the Ninth all over again. They did, certainly, have a bit in common: both were by turns manic and brooding. However, I thought the Tenth Doctor more likeable, gentler, cheeky but with less of a sharp edge to his tongue, even when rude. "Is that what sort of man I am? Am I rude? Rude and not ginger?" Which was why, when he got angry, he was all the more frightening. 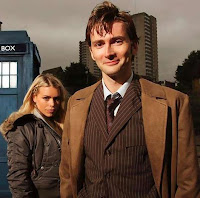 And as the series went along, the Doctor changed... and not always for the better (as a person. As a character development story, it just kept on getting better and better.) After the loss of Rose in a parallel universe that she could never ever return from (for now) The Doctor starts getting darker, crueler. The sight of him standing, hard-faced, staring down at the dying Racnoss, is frankly terrifying. Donna tells him "sometimes you need someone to stop you." He also seems to be stringing Martha along, letting her come along with him for the ride, then one more, then another, but constantly comparing her with Rose. And of course, Martha is in love with him too. 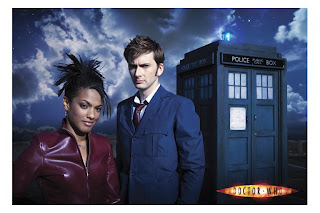 Maybe because she was only there for one series (and some odd episodes in series 4) and maybe because she was constantly feeling like a second-best Rose, but unfortunately I never really felt that Martha was very well-rounded as a character in her own right. I think because of the way she related herself to the Doctor - wanting to take Rose's place in the TARDIS and the Doctor's life, but being a poor second best, that's the way she came across in the series (again, that's only my opinion.) With series 4, when Donna came along, it seemed as though they were deliberately trying to make her the anti-Rose. Every episode so far on my re-watching of the series, they are mistaken for a couple and make it quite clear that they aren't married. At first she seemed like the writers had put in the effort to make her the exact opposite to Rose and Martha, but as the series progressed she became a more fleshed-out character.

At the end, the character development becomes terrifying, when he decides that as the last Time Lord, it is up to him to make the laws of time... culminating in a character's suicide. "I've gone too far!" From there on, he has to die. He thinks he is a god... there is nowhere he can go from there, except redemption and death.


Rewatching the series in an attempt to remind myself where we've got to and how we got there in time for the new series (which starts in ten minutes so I think I failed in that one!) I am reminded just how much the Tenth Doctor suffers. The Ninth Doctor was the first shown after the Time War that destroyed his home planet and all his people, and he was a little bitter and brooding about it, but the Tenth Doctor is a tortured soul who takes everything so much to hearts. His home, his family, destroyed - forever. His best friend - trapped forever (for now) in a parallel world. He becomes human, falls in love, has the chance of a happy life - but instead has to go back to being a lonely Time Lord. He discovers his worst enemy is alive - his worst enemy who is like a brother to him. He dies. He has (in one way) a daughter. She dies. (she gets better, but he never finds that out.) His new best friend  has to forget he ever existed, or she will die. 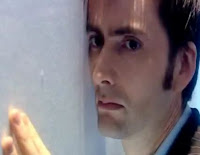 When it comes to New Who finales, there has always been, so far, a build-up to a big bang of a story, hints spread throughout the earlier episodes, ending with something huge - and inevitably even more danger than the last year's story. Series one there were Daleks way into the future. Series two, Torchwood was identified, and both Cybermen and Daleks materialised into the here and now from a parallel world. Series three, the Master became Prime Minister of Britain, Master of the world, decimated the world's population (but at least he used the word literally) and it became a terrifying, barren planet. "Planet Earth is Closed." Series Four ended with Daleks, Davros and the world being moved for some nefarious purpose I can't remember but that was so desperate that a better alternative was to blow up the planet. And Series Five, or the Specials, if you prefer, finished with the return of Gallifrey, the Time Lords, and the revelation that the Time Lords wanted to bring an end not just to the world, not just to the universe, but to time itself. 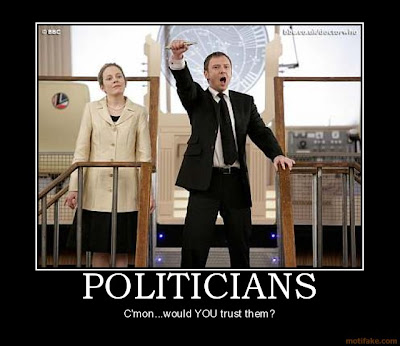 Problem is, although it is always thrilling to find out what all these mysterious clues mean, to see Daleks, or the return of Rose Tyler, or the Time Lords, once the story's finished, I so often find myself feeling a bit disappointed. The last three finales, in particular. Series 3 ended with time going back a year, so that the worst of the Master's evil plans had never happened. Granted,it is a time-travel show where anything goes, and the Master had gone so far that there was no conceivable way of putting the world right. Granted, there needs to be secrecy to keep the general public from knowing most of what is going on, otherwise it becomes a fantasy world where aliens are accepted as a part of everyday life, and that takes off some of the immediacy. But I still think that the "reset button" should be as much of a taboo as "it was all a dream," a sign that the writer doesn't know how to get his characters out of their predicament. In series four, the penultimate episode ended with the Doctor getting EX-TER-MIN-ATED by a Dalek and regenerating... only to begin the final episode as the same person, and somehow (again, can't remember the details, growing a second, human, Tenth Doctor from his severed arm. Though I really like Tennant as the Doctor, and didn't want him to change, it would have been very effective to regenerate him without it being given away in advance! It would have been an interesting plot to throw a confused, brand-new version of the Doctor right into the chaos. The fangirls never would have forgiven that, though. Also, after bringing back Rose to the series - which I also thought was a bad idea because her story was over and the show needed to move on - the Doctor fobbed her off by giving her a clone of himself for a boyfriend. (You can't have me, but this bloke looks like me, have him instead.) 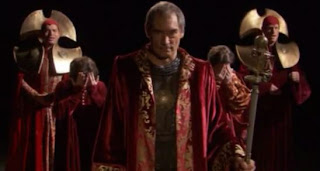 I had been hoping that somehow the series would be able to deal with Gallifrey and the Time Lords again, despite the Doctor insisting they were destroyed in the Time War, which presumably means that they're eliminated from all of time and space except from his memory, as he can't even take the Tardis to pre-time-war Gallifrey. After all, "forever and ever" in Doctor Who seems to translate to "for now, anyway." So I was thrilled to see their return at the end of the Christmas Special: The End of Time Part One. But I thought the writers had wasted their opportunity. Clearly they wanted to show the Time Lords as a great finale, a good way for Russell T Davies to finish as Big Boss Man, and certainly they made an impact. But when it came to part two, there just didn't seem to be much of a story. It felt rushed to me, lots of drama, rushed through, before we get to David Tennant's big goodbye scene. And Tennant certainly deserved a good farewell. But it seemed to come at the expense of a story which could have opened up a lot more possibilities than were allowed. (Oh look, there's a bubble hiding the Time Lords. Mwahahaha! Time Lords have gone bad. Pop! Bubble's gone. Time Lords too. Bye-bye!)


With five minutes to go before the new series begins, I think of David Tennant's Doctor as "my doctor." Yet, with the trailers for Matt Smith as the Eleventh Doctor, he is already moving into the past tense. His last words as the Tenth Doctor were, "I don't want to go," to which I wanted to cry, "I don't want you to go either!" I imagine that the new Doctor will be feeling a bit bewildered about that: aware that he was upset about changing, but unable to feel anything now, and thinking he should - rather like the Tenth Doctor, once he had stopped being John Smith the schoolteacher.
Matt Smith looks wonderful, a more classic-style Doctor, reminiscent of Jon Pertwee, with a bit of Tom Baker thrown in. A young actor - only three years older than me - but supposedly playing the character as a much older man. Polite, quietly-spoken, with a real sense of adventure. His companion, Amy Pond is Scottish, ginger and young. I am a bit worried about her, in a way. She seems too young to my eyes. She is described as "feisty," which is all very well, but I'm hoping there is more character depth than some possibilities. It is all too easy to designate a character as "feisty" to make sure they're interesting, and for it to mean little more than "argumentative." Then again, that was what I first expected Catherine Tate's Donna to be like. We will wait and see.

In the absence of a sofa in the house, it is time for me to position myself behind the armchair...
Posted by Katie Edwards at 17:33