I Shall Wear Midnight, Terry Pratchett

Terry Pratchett's latest Discworld novel is the fourth and final installment in the Tiffany Aching and the Nac Mac Feegle subseries. The Wee Free Men, A Hatful of Sky, Wintersmith and now I Shall Wear Midnight make up a quartet of books specifically aimed at the Young Adult market and also enjoyed by adults (as opposed to the others which are adult novels also appreciated by teenagers.) The subseries follows child witch Tiffany as she trains for her career, which includes fighting the Queen of the Elves with a frying pan, kissing the spirit of Winter, and is watched over by the Nac Mac Feegle, a chaotic clan of fairy warriors who were probably thrown out of fairyland for being drunk and disorderly. By the beginning of I Shall Wear Midnight, Tiffany is fifteen years old and is established in her role as the witch of the Chalk. 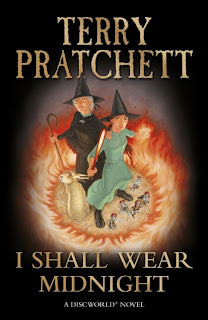 The book's title refers to a comment by Tiffany in one of the earlier stories: "When I am old, I shall wear midnight." (It also evokes the wonderful poem by Jenny Joseph that begins, "When I am an old woman, I shall wear purple.") As you might expect, this is very much a coming-of-age story, and explores more mature themes than its predecessors. Very early on we are plunged into a chapter that is comparable with the previous darkest scene of the Discworld, (The Cable Street Cells And What Vimes Found There in Night Watch,) and this in a kids' book! The scariest moments are those where there is nothing fantastical about the monsters at all - because the monsters are entirely human.
Not that Pratchett's other monster isn't scary as well. The big baddy is the Cunning Man, the ghost of an evil witch-finder of long ago, who stirs up people's suspicion of the witches, and their headology, first sight and second thoughts.*

The Cunning Man seems to have evolved from something human into the personification of an idea, something that appears again and again, that a witch may be able to defeat for now, but not for ever. He seems more than a mere monster, like a vampire or even a malevolent ghost. To me it seemed that the Cunning man represents the darkness of the human heart and a warning that it can grow independent and out of control.

But I Shall Wear Midnight is not all darkness, doom and gloom. For one thing, we meet the Nac Mac Feegle again, who persisted in making me cackle insanely with their banter and their twisted logic, their sly trickery and sheer stupidity! It's not possible to tell you enough about the Feegles to give you an accurate picture, so I'll show you instead:
﻿
﻿

"Why is it, Rob Anybody, that you persist in lying when you are caught red-handed?" [asked Tiffany]

"Ah, weel, that's an easy one, miss," said Rob Anybody, who was technically the head an of the Nac Mac Feegles. "After all, ye ken, what would be the point of lyin' when you had nae done anything wrong? Anyway, now I am mortally wounded to my giblets on account of me good name being slandered," he said, grinning. "How many times have I lied to you, miss?"

"Seven hundred and fifty-three times," said Tiffany. "Every time you promise not to interfere in my business."﻿﻿

This is the final book of the Tiffany Aching series, and it rounds off nicely, leaving Tiffany at sixteen, with a comfortable career and a bit of romance. This book contains cameos from other subseries, such as the original three witches, (Nanny Ogg is on top form!) and various members of the Ankh-Morpork City Watch. And fans of Pratchett from the earliest books get to meet an old friend.

*Headology should not be confused with psychology. Headology relies on the idea that people's understanding and beliefs shape their reality. When Granny Weatherwax is attacked by vampires in another book, they find themselves desperately craving a cup of tea. First sight is seeing what is really there. Second thoughts are when you think about what it is that you're thinking.
Posted by Katie Edwards at 21:17