The Other Alice, Julia Clarke


Ally is like a bad fairy who arrived at the party and cast an evil spell over the world. Everything in my life is fracturing and changing and going wrong, wrong, wrong. 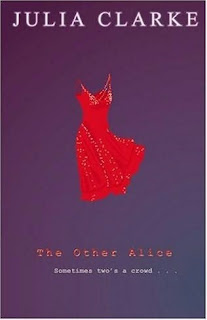 Alice is fed up. It is the night of her elder twin brother and sister's birthday party, and she doesn't want to be there. Sister Nell is shouting, Mum is tired from a stressful week at work and Alice's two best friends have stood her up in favour of a double date. When a strange girl gatecrashes the party, all it takes is one small lie about knowing her. Like a vampire, that small invitation is enough for the other Alice, Ally, to creep into the family's affections. Only Alice (our Alice) feels uncomfortable and doesn't trust the newcomer.

The Other Alice is a simply-written story exploring the issues of family, identity and young romance, with a claustrophobic layer of mystery. Although I borrowed this book from the teenage section of the library, it seems to be aimed at the lower end of the age group, maybe for ten to thirteen-year-olds*, due to its straightforward narrative style which has Alice immediately state the thoughts that other novels might take chapters of hinting and suspicion. This is not a criticism, as I wasn't in the mood for a twisty narrative taking a long time to arrive at an inevitable conclusion. The uncomplicated narrative style, middle-of-nowhere Yorkshire setting and realistic characters made The Other Alice a cosy read that took me back to the books I used to check out of the library ten years ago.

I found it interesting that Julia Clarke decided to give two main characters the same name. There was no confusion as one Alice narrated the story and the other used the short form Ally, but it was interesting to think of the two girls as two sides of the same coin. Alice is a good girl, sensitive and rather idealistic with a vivid imagination, while Ally is unpredictable, wild and rather dangerous. Alice senses that Ally wants something from her family, and while Ally makes herself at home and invites herself into family occasions, Alice feels slowly squeezed out.

It was interesting to read The Other Alice immediately after writing my review of Fallen, as there is a similar love scenario to the former. Alice has a crush on her sister's boyfriend Spence, and her feelings for him, while rather vague and unlikely, cause her to turn down the more obvious candidate in her friend Sam who loves her. (Yes, another love interest called Sam! Good name. My first crush was on a Sam. But that is beside the point.) It was refreshing after all the star-crossed-lover, eternal romances that are out there, to read one that is based on liking, hormones and being flattered by someone paying attention. It may be small-scale, but I could relate so much better than in most teenage romances. My only slight criticism was that, lovely though Sam was - and he was! - he seemed a bit too good to be true among a cast of complex characters.

A quick, satisfying read and an enjoyable way to spend an evening.
*I realised after writing this review that The Other Alice contained a bit of language which would take it to a 12A/PG-13 rating if it were a film.
Posted by Katie Edwards at 23:04